The Smithereens is a band few know about today and that in itself is a shame.  Formed in 1980, this band would produce a dozen albums in addition to innumerable compilations, live albums and soundtracks until the death of the lead singer Pat DiNizio in 2017.

While the Smithereens would produce a ton of great music, it was Green Thoughts that introduced me to the band and this album remains my favorite of their to this day. 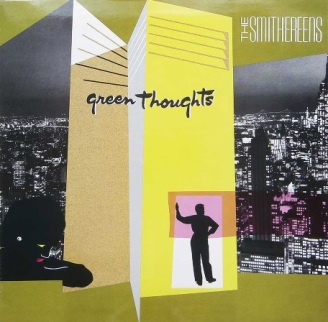 I am not sure how I came across the album Green Thoughts but somehow a copy fell into my lap sometime in early 90’s.  From the moment I heard the opening track, Only A Memory, I could tell there was something special about the band.  It may have been their polished Beatlesque sound or their ability to blend pop rock with a touch of Chet Atkins style guitar work, but whatever it was, this was a band that was on heavy rotation on my cheap GPX CD Boombox and I loved every second of it.

Part lounge singer, part crooner and part pop icon, Pat DiNizio had a voice that evoked the classic tone of Del Shannon and Buddy Holly. Coupled with the guitars by Jim Babjak, Bass from Mike Mesaros and drums by Dennis Diken, the quartet managed to create a sound that is unlike anything from its era setting itself apart from the rest by borrowing from their classic inspirations.   This was a band that was safe to listen to with music that was easy to fall in love with.  It was pop rock in it’s purest form and, with my love for the Posies that emerged at around the same time, it is no surprise that I became a fan.

The album itself is the pop equivalent to the stereotypical country album. Full of songs about love, loss and rejection, this was the perfect album for the love-struck teenage boy in the 90’s.   It is that old friend that is there to listen to your heartache, no matter what time it is, or decade for that matter.  This is an album that is good for background music and one that I could easily see playing at some party in a tv series back in the day.

While the subject matter is all about heartbreak, the songs themselves are safe, with nothing in their message even close to being offensive or questionable and that is part of it’s charm.  It is one of those rare albums that doesn’t try too hard to get a deep message across, it is just an album of good music.

The opening Track is a blast.  With the classic guitar feedback lead in, Only A Memory jumps right in with a story of a boy in love with a girl who has left him.

Something New sounds like a tune that Chet Atkins would have played on.  With the classic guitar picking and classic sound, this is a solid track through and through.

The final (and title) track, Green Thoughts is a perfect closer for this album.  It is a song about someone who cant stop thinking about what his (ex?) girlfriend is doing while he isn’t there.

The album itself is no longer in print but don’t let that stop you from giving it a spin.  You can still listen to it on Spotify along with the rest of the Smithereens discography.  It is well worth it and one that I think you may dig. Sadly we lost lead singer Pat Dinizio a few years back.  I never got to see them in concert but at least I have the memories and the music.