Today’s episode features one of my favorite recurring characters that I love to hate and love to love, Lwaxana Troi.  Played by Majel Barrett, she is always brings a fun time when she arrives but also will end up getting on your nerves after a while.  This lady is a conundrum and, this time, she is on a hunt of her own.   Originally airing on June 19,1989, this is Manhunt.

The Enterprise picks up Ambassadors in order to transport them to a  conference on Pacifics. Before they get underway one Ambassador Lwaxana Troi visits the Enterprise intent on finding a husband, much to Picard’s dismay.

Upon arriving, Lwaxana invites Picard to a diplomatic dinner in which he accepts not knowing that the dinner does not involve anyone but he and Lwaxana alone.   He arrives, surprised to learn it is just the two of them and, when things get uncomfortable, he contacts Data to present an analysis of cultural rituals for meals.   Upon contacting him, he requests Data’s presence and allows him to ramble on about various subjects.  This eventually bores Lwaxana and allows Picard to avoid her seductions as was his intent. 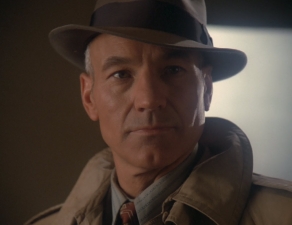 Troi confides in Pulaski, indicating that Lwaxana is going through a time in her life called The Phase, when her sexuality is at its peak (+4x regular sex drive according to Troi). During the phase she has decided to phocus all of her attention on one male with the intention of making him her husband.  Unfortunately Picard is in her sights and, when Troi explains the situation to him, he decides to hide out on the holodeck in one of his Dixon Hill programs.

He soon discovers that the program is a little more violent than he had wanted as he was looking for something more relaxing.   After several attempts to adjust the program to be more relaxing, he then chooses to go out with his secretary at Rex’s Bar.   She hands him a revolver telling him that he’s ‘gonna need it.’

Lwaxana, in her continued pursuit for a mate, sizes up Worf and even Wesley for potential companions.  She rules them out as too primal and too young respectively.  She also considers Riker but as Deanne is interested in him, she asks her to back off.  Lwaxana ignores her and announces that she and Riker will be wed when they reach their destination. Riker is as confused as anyone and Troi is seriously unhappy about it.

Riker and Data visit Picard on the holodeck to let him know that the Antedians have awaken and to also appraise Picard of the Lwaxana situation.  As they discuss the situation, much to Picard’s dismay, Lwaxana makes a surprise visit to the holodeck as well.

She soon becomes smitten with one of the holodeck characters not aware that he isn’t a real person.   Picard lets the truth be hidden from her until they arrive at Pacifica where she is disappointed but more clear headed now that she has had a romantic encounter.

As she leaves, she reveals that the Antedians are actually assassins and not delegates.  She picked up the information from their minds and inadvertently saves the conference from destruction.

Although it gives Lwaxana a little more background it is an insanely boring episode that honestly doesn’t do anything to further the principal characters or the story. Everything that happens literally could have been from several episodes of side stories and no one would have been the wiser.

Don’t get me wrong, I adore Majel Barrett but this episode really doesn’t utilize either her or Picard to their potential and that is a damn shame.  Honestly, I don’t know what the point of this episode was other than being a filler episode as the season approached it’s end.  Heck, they even wasted a chance to have another fun Dixon Hill adventure.

Mick Fleetwood (of Fleetwood Mac) makes a ‘secret’ cameo in this episode.  Although his name is in the credits, you won’t catch a glimpse of his face as he is under the makeup of the Antedian Dignitary.   Here we get the lovely budget costumes of the season.  Comprised of  hula hoop and silver curtains, they aren’t much to look at.

Thanks for reading the Retro TV Review,  I look forward to discussing the rest of the series with you, one episode at a time every Monday, Wednesday and Friday!  Next Review: The Emissary