An unexpected team-up and a some changes to the status quo all in the episode that was originally aired on February 5,1996, this is Return to Grace.

After a Klingon Bird of Prey destroys a Cardassian Outpost, killing Cardassian and Bajoran representatives, Kira and Dukat team up again to hunt down those responsible. 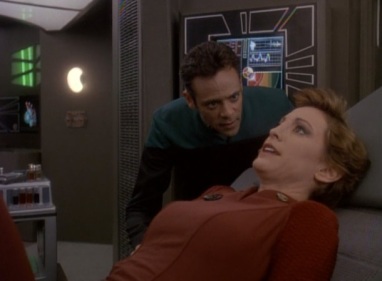 Kira receives an inoculation from Doctor Bashir as she prepares to visit an obscure Cardassian outpost to share vital information about Klingon activities in the area.  After receiving her inoculations, she is surprise to learn that Gul Dukat is her escort to the outpost as he has been demoted to the position of a Freight Captain due to the public revelation of his half Bajoran Daughter.

Travelling on Dukat’s Freighter, Kira is delighted to see that Tora Ziyal, Dukat’s Daughter, is aboard and they catch up.  After visiting the bridge, Kira is invited to dinner with Dukat and reluctantly accepts.  Just as they begin discussing their lives, a ship-wide alert goes out and the two discover that the Outpost has been destroyed.  They are soon shocked when a Klingon Bird of Prey decloaks in front of them. Dukat is soon shocked (and dissapointed) that the Klingon ship does not see them as a threat and leaves his Freighter alone.

Kira soon decides that they need to seek down the Klingon ship and avenge the deaths of their people. Dukat is concerned that his Freighter is no match for the enemy and Kira begins to teach him how the Bajoran Underground managed to fight the Cardassians despite the Cardassians technological superiority. Preparing for the inevitable battle, it soon becomes clear that Gul Dukat has romantic feelings for Kira and Kira wants nothing to do with it.  Soon Kira finds herself training Ziyal in the use of weaponry in case anything goes wrong in the incoming battle where the two discuss the relationship between Kira and Dukat.   Ziyal wants the two of them to get along and Kira makes it clear that she will never forgive the Cardassian Gul for his past actions.

Dukat is elated and contacts central command to report on his victory.  After informing the Cardassian Government, Dukat is disappointed to learn that Central Command does not want any further combat with the Klingons although he has been reassigned to his old post as Military Adviser.  Not wanting to stand aside, Dukat decides that he has no option than to go up against the Klingons himself.  He asks Kira to help him organize a resistance cell and join him in his battle.  Kira refuses even after a very rousing speech from the Cardassian Gul.

Later, Kira sees that Ziyal is determined to follow her father in battle but Kira has other plans.  Knowing how dangerous this life Dukat is heading toward, Kira volunteers to help by taking care of his daughter on board DS9.  Dukat reluctantly agrees and Ziyal joins Kira on the station.

While this is a strong episode overall, this episode is much more about putting more pieces on the chess board for one of the upcoming battles.  With the Klingons in a state of war it becomes very clear that things are going to get violent very quickly and with Dukat in command of his own rogue Bird of Prey, this puts a knight on the board.

The real reason behind this episode is an attempt to make Gul Dukat a hero, or at least redeem a man who was responsible for the deaths of an innumerable amount of Bajorans.  While the writers seem determined to make him a hero, his past keeps nipping at his heels and that redemption arch doesn’t manage to go very far.  You know what they say, a leopard never changes it’s spots, nor do Cardassians.

All in all, a well written adventure but one with only tertiary character development.

Thanks for reading the Retro TV Review,  I look forward to discussing the rest of the series with you, one episode at a time every Monday, Wednesday and Friday!  Next Review: Sons of Mogh