We finally learn the secret behind the Tattoo on Chakotay’s forehead in the episode that originally aired on November 6, 1995.  I mean, this obviously neglected plot line has bothered you right? Every time he has arrived on screen that Tattoo just screamed to be explained!  no…oh well. This is Tattoo.

After discovering a symbol that looks very similar to one he saw once on Earth, Chakotay begins investigating the possibilities that an alien race from the Delta Quadrant once had contact with Chakotay’s own people.

Story A: Chakotay and The Sky Spirits 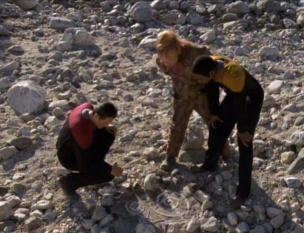 While on an away mission, Chakotay sees a symbol from an ancient race that reminds him of something he saw as a youth.  Returning to the ship, Chakotay shares the discovery, and the memories of his youth, with Janeway only to have her inform him that Torres has located a warp trail leading to a nearby M Class Planet.  Accepting that this race might have the polyferanides the ship needs, Chakotay agrees to pursue the ship which might hold answers for him as well.

Arriving at the planet, Voyager detects the pollyferanides and Janeway sends an away team to gather information noting that there is a strange EM field preventing their use of the transporters. Taking a shuttle to the surface with Tuvok, Neelix and Torres, Chakotay has another flashback about his youthful doubts concerning the ‘sky spirits’.  Landing the shuttle, Chakotay spots a man’s face in the lightening of the storm that has formed upon their arrival.

Soon Neelix is attacked by a hawk and is beamed back to the ship out of harms way.  Tuvok soon finds some structures that resemble the same ancient structures Chakotay saw as a kid. Intrigued, their search indicates that the inhabitants of these  structures are still nearby and Chakotay believes that these inhabitants might see them as a threat. After the away team lay down their weapons, the inhabitants begin to make their way out only for another freak story to begin.  The storm causes the team to rush back to their shuttle but the group is separated before Tuvok can beam them all off safely causing Chakotay to be left behind.

On the ship Paris finds no sign of the shuttle and Janeway decides, since they can’t beam down, the only way to find Chakotay is to land the ship.  Soon however, the ship finds itself in a cyclone preventing it’s landing and endangering the ship itself.

On the surface Chakotay soon find his way back to the camp of the ‘Rubber Tree People’. Remembering his past experience, he dresses in a robe and takes shelter in a cave to weather out the storm hoping to communicate with the aliens.  Soon the aliens appear each baring similar tattoos to Chakotay himself.  Unfortunately they only speak the language of the Rubber Tree People and Chakotay struggles to remember any of the language from his youth.  When the aliens see that he is struggling, they use a universal translator to communicate and are shocked to learn he is human. Referring to him as one of the Inheritors, Chakotay learns that the aliens were responsible for helping early Native Americans to form a society and the aliens were saddened to hear that these people have since been decimated.  Chakotay assures the ‘Sky Spirits’ that the current inhabitants have changed their ways and that Voyager is among those who are peaceful once again. Freeing voyager, the ‘Sky Spirits’ give Chakotay as much polyferanide as they can but it is not as much as the ship needs.  Chakotay is grateful and thanks the Sky Spirits for their generosity, returning to the ship after finally hearing his father’s answer he has been seeking so long for in his vision quests.

After seeing Ensign Wildman and exhibiting less than acceptable bed side manner, Kes challenges the Doctor to experience illness for himself in the hopes it will make him more humble.

Returning to sickbay soon-after, Kes is shocked that the Doctor has ‘infected’ himself with a 24 hour Levodia flu.  However soon she finds out that he is not doing it to make himself more caring but to show people that it is easy to tough it out.  After treating Neelix’ injuries from the Hawk it is soon apparent that the flu is giving him more problems than he had expected but the Doctor manages to keep his decorum despite his misery.

Soon the Doctor is shocked that his flu program is lasting longer than he expected causing him to panic in his misery.  Desperate he worries that he is dying but, when he learns that Kes added a few hours to the simulation, he realizes that he might have been acting rather rash toward his patients suffering.

All we really know about Chakotay so far is that he is a former Maquis Captain who has a Native American heritage that he holds very dearly. His heritage is as much a part of him as the tattoo on his forehead but it seems that this was not always the case.  As a Youth, Chakotay made it clear that he had no interest in his heritage or the lessons his father offered.  Soon he makes it clear he wants to separate himself not only mentally but physically from his father and their heritage by joining with Star Fleet further damaging he and his father’s relationship.   It is not until his own people, including his father, is killed in the battle for the abandoned planets along the Cardassian neutral zone that Chakotay fully embraces his heritage and his place in life. It seems, however, it is too late for him to make amends with his father who is killed in one of the battles with the Cardassians. Marking himself with a forehead tattoo in honor of his father, Chakotay then decides to try to find a connection with his late father knowing that it may not ever happen. Interestingly he finally finds it some Seventy Thousand light years from home.

To me, this episode is not only about the self discovery of Chakotay and his connection with his past, but how many of us push aside our heritage and culture only to find ourselves returning to our ‘roots’ eventually.  For some reason human’s have an affinity for the past and, while sometimes it is to our detriment, there is a lot to learn from it.

One other aspect I love about this episode is that this one of Star Trek’s answers to the Ancient Aliens theory.  In that theory it is believed that beings from another planet were responsible for the meteoric rise of civilization, with humans ‘suddenly’ gaining knowledge that was previously unheard of.  While STNG addressed the reason why most aliens look humanoid in the lackluster episode The Chase we have never really addressed the idea of Human Culture being influenced by aliens until now. Now this is clearly not the same alien race that influenced the Egyptians or anyone else on the other side of the planet but at least we know where the Native Americans came from right? 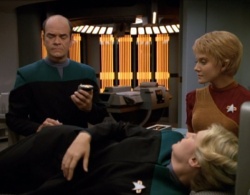 The B Story is a fun one that gives the Doctor some rather fun moments but honestly it could have fit in with any other episode as a B story so I am not sure why it was shoehorned into this one.  Don’t get me wrong it was fun but not really necessary even knocking the balance off a bit with it’s humor.  That being said, we do learn that Kes is pretty devious.

Overall, this is a pretty solid episode that explains something that no one ever really wondered about but in a way that actually works.  I mean, I never really cared how Chakotay got his tattoo or why but hey, it makes for a good story after all.

Thanks for reading the Retro TV Review,  I look forward to discussing the rest of the series with you, one episode at a time every Monday, Wednesday and Friday!  Next Review: Cold Fire