The Doctor finds himself on an away mission…home.   Originally broadcast on January 21, 1998 this is message in a bottle.

After the discovery of what appears to be an abandoned subspace relay, Voyager has a chance to contact Star Fleet by sending the Doctor home.

Seven of Nine summons Janeway and Chakotay to the astrometrics lab with massive news for the crew.  She has found a way to use a nearby relay station network to detect a Star Fleet vessel near the border of the Alpha Quadrant.  With this seemingly abandoned relay station they have a chance to communicate with Star Fleet for the first time in several years.  There is an issue though, it seems time is of the essence in their communication as the vessel she has located will be out of range in less than an hour.

Appearing on the ship he soon discovers that he is aboard the USS Prometheus and that something terrible has happened.  Several crew-members have been killed and a young Ensign dies just after telling the Doctor that Romulans have taken the ship. No sooner does the Doctor learn this than the USS Prometheus goes into battle against another Federation ship.  Splitting into three parts, the Prometheus easily defeats their pursuers but one of the Romulan hijackers is hurt in the process.  Soon the Romulan’s bring their wounded to sickbay and are surprised by the Doctor’s presence, although he reassures them that he is there to assist. As soon as they depart the Doctor summons the ships EMH only to find that it is a newer model,  the Mark II.

After receiving disdain from the Mark II for being an inferior model, the Doctor finally convinces the Mark II of what is going on.  Confused at why the Romulan’s are attacking, the Doctor learns about the war with the Dominion but get’s little information.  Soon the Doctor is able to convince the Mark II that they need to retake the ship and they both assist the injured Romulan before beginning their plans. Knowing that there is no chance for another vessel to catch this prototype ship, the Doctor and Mark II decide that they need to release anesthetic to knock out the Romulan hijackers.

The Romulan commander, Rekar decides to alter course to take the ship to the Tal Shiar despite the objections of the rest of the crew.  Using the altercation as a distraction, The Doctor attempts to access the environmental controls but is soon caught by Rekar who realizes that the Doctor is up to something.

While the Doctor deals with a Romulan Threat, The crew of Voyager begin preparing letters for home, with Janeway and Chakotay particularly interested in hearing from those they left behind.  In Astrometrics, Torres and Seven get into a confrontation but are soon interrupted by a transmission from a strange armored alien who informs them that the Relay is owned by the Hirogen.  The Hirogen Soldier tells them that they are to no longer use the relay system and severs their link to the Doctor.

Back on the Prometheus, The Romulans begin interrogating The Doctor believing him to be a spy or an agent from the Federation.  The Doctor finally comes clean explaining that he was sent from the Delta Quadrant but Rekar and Nevala do not believe him.  Instead they decide that they will simply take his program apart to find out who he is but, before they can act, they begin to cough and fall unconscious. Moments later Mark II appears informing the Doctor that he has managed to complete their mission.

Now under command of the ship they manage to slow the ship from high warp but soon discover that three Romulan Warbirds are heading their way.

Back on Voyager, Seven and Torres try to reestablish the link to The Doctor on the Relay network.  Janeway joins in and soon the Hirogen, appears again, warning them to stop attempting to use the relay system. Despite Janeway’s please, the Hirogen begins to cut the communication again but, just before he can cut their communications, Seven sends a feedback loop knocking the armored alien out. While Janeway is not pleased, Torres remarks that she is impressed with Seven’s methods. 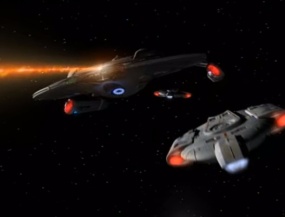 With the Romulan ships in range, it is soon clear that they can not fool the incoming combatants and a battle begins with the EMH’s in command.  Soon things get more complicated when Federation ships arrive and begin attacking the Prometheus believing the ship to be commandeered by Romulan forces.  Attempting to hail the ally ships fails as the Romulans have scrambled the comms forcing the two to defend themselves.  The Doctors soon join in against the Romulans fending them off and allowing an armed contentment of Security officers aboard the stolen ship.

Back on Voyager Janeway, Chakotay and Tuvok welcome the Doctor who returns with news. It seems that Starfleet had declared Voyager lost 14 months prior but now Star Fleet is forming a team to help get them back home, while also letting their families know that they are alive.  While they will not be able to transmit messages back and forth yet, the Doctor informs Janeway that Starfleet sent one to them,  that Voyager is no longer alone.

I love this episode. Not only does it makes for a great stand alone story it also manages to be a part of both the larger narrative and a smaller story-line that is to follow.  Lets start with the stand alone story.

I have made it pretty clear how much I love the Doctor as a character on Voyager, his journey into sentiance is one of my favorite aspects of the series and, when he gets a chance to act on his own it is usually something special.  As usual, Robert Picardo fully owns this episode acting as not only The Doctor, but having to stretch his programming to be both a saboteur and even the Captain of a ship during a confrontation. This, combined with the introduction of the EMH Mark II, played by Andy Dick, gives Picardo a chance to really shine.  While I have never been that big of a fan of Andy Dick, the two of them really play well off of one another establishing an unlikely friendly rivalry that I was sad to see end at the wrap of this episode. Interestingly, this episode is somewhat a followup to the DS9 episode Doctor Bashir, I Presume where Doctor Zimmerman is working on a new EMH and is interested in Bashir as a template.  It seems Bashir was not chosen however.  One aspect of the story I found cool was the prototype of the USS Prometheus, a ship we never really see again despite it’s rather cool separation abilities and armament.  It makes sense that Star Fleet would develop a warship like this during the Dominion War but it is sad that it wasn’t really used again…well…not much anyhow.

Now lets talk about the larger narrative.  This episode is a pivotal part of the Voyager narrative in their effort to reconnect with Star Fleet in their journey home.  Since the start, it has been Janeway’s mission (although sometimes loosely) to get her crew home.  While the crew has had many close calls in this mission, each time was quickly taken from them time and again.  Now that Star Fleet is aware that Voyager is still intact and functional, not only is their mission to get home more attainable but they may have help from the other end adding to their hope. Not only this but you have to wonder what Star Fleet believes or is planning at this moment.  With both a Star Fleet crew and members of the criminal organization known as The Maquis, you know some Admirals are discussing what this could mean for their missing ship. Regardless, This all comes about through the use of a sensor network that appeared to be abandoned…leading us into the smaller, but no less interesting story, the introduction of the Hirogen.

While I won’t get too deep into this new species, this is one of the most clever ways to introduce a new threat to Voyager caused, in part, by the crew of Voyager itself.  The results of this accidental contact with this new, and quite deadly race, begin in the next episode and, although they are remarkably similar to another race of armored scifi hunters, they prove to be a pretty cool bunch of aliens.

One last aspect that is worth noting is the integration of Seven of Nine into the crew.  Using her command of the Astrometrics lab as the launching point to the story, we get to see how Seven is acclimating to her life on Voyager.  This is seen mostly through her interaction with B’Elanna who makes it very clear she is not fond of the silver clad former Borg.  The two soon find a loose bond over Seven’s rather abrupt dealings with the Hirogen leading to an understanding, if not a gradual friendship over time.

All in all, This is a great episode that could have been an excellent season finale but instead it serves as a terrific mid point for Seven of Nine’s first season on the show.  Not only showing us her use to the crew but reminding us, and the members of Voyager, just what it is they have been trying to get back to.  Star Fleet knows that they are alive and that is enough to keep them going.

Thanks for reading the Retro TV Review,  I look forward to discussing the rest of the series with you, one episode at a time every Monday, Wednesday and Friday!  Next Review: Hunters