Do the ends ever justify the means?  Is suicide ever okay?  These questions and more are explored on the episode that originally aired on March 2,1992.   This is Ethics.

Worf is terribly wounded in a freak accident and the only person who can save him has somewhat questionable ethics.  Worf soon asks Riker to assist him in committing Ritual Klingon Suicide as it appears that Worf will be paralyzed for the rest of his life. 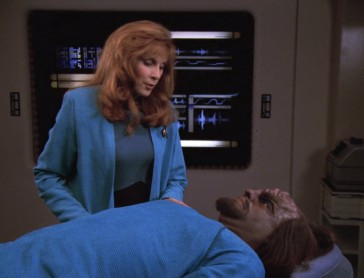 In a freak accident in the cargo bay, a container falls on Worf fracturing his spine and paralyzing him permanently.  Doctor Crusher requests the assistance of Doctor Toby Russell who specializes in neurology.   Crusher informs Doctor Russell that this is uncharted territory as Klingons traditionally allow paralyzed citizens to die as that is the only way for them to keep their honor.  Crusher and Russell discuss options and Russell shows Crusher a new device she has developed that will grow a new spine for Worf.  This process, called Genetronics, has never been tried on a humanoid and currently only has a 37% success rate in holographic simulations.  Crusher declines to use the process but it seems Russell has other motives.

Soon Worf requests that Riker assist him in a ritual known as Hegh’bat, a Klingon Suicide.  In his mind, this will allow him to keep his honor intact and die with dignity.  Riker refuses, indicating that he will not help a friend and colleague die.  Riker takes his concern to Picard where Picard tells Riker that his first officer should honor Worf’s request.  This is a matter of Klingon culture and for Worf to ask Riker for assistance is a great honor in itself.  Riker has some decisions to make. Soon he informs Worf that he will not assist Worf as it is not Riker’s place to do so.  He informs Worf that it is in-fact his Son’s place to complete the ritual as his son is his first borne.   This makes Worf realize that it is not his time to die.

Russell and Crusher present Worf with his options that will allow Worf to regain around 60% of his mobility over time. He is upset and refuses to accept any of the current options.  After an outburst from Worf, Russell presents the option of Genetronics despite Crushers argument against the procedure. Soon the ship takes on wounded and it becomes clear that Doctor Russell values science and research over saving lives as she may be responsible for the death of one of the wounded.

Word requests the procedure and, despite Crusher’s misgivings, she agrees to allow it.  Worf asks Troi to care for Alexander if he were to die as a result of the operation. She agrees and he is ready to go under the knife.

During the operation things turn bleak and Worf dies on the table despite all of Doctor’s Crusher and Russell’s work.   When Crusher informs Alexander, he insists that he be allowed to see his father.  Just as all looks bleak, Worf’s Klingon redundant system kicks in and he revives much to Crusher’s surprise.

This episode is full of a ton of character development.  Much of it is Worf’s but we also get to see some great development for Riker and Doctor Crusher.

For Worf it is a major point of development. We get to see him really grow from being just a Klingon Warrior to realizing that he is more than that, that he is also a Father and a friend.  Throughout the episode he is unwilling to accept his fate as a possible quadriplegic.  To him this makes him less of a Klingon and this is simply unacceptable.  This soon becomes a personal journey for him as he soon realizes, thanks to Riker, that he is not alone in this any longer and has Alexander to care for.  This spurs him to try to survive even though all of his instinct tells him that he should just allow himself to die.  Even in the end he is willing to accept assistance from his son in a manner that he would never have allowed from anyone else before.

During this journey we got a chance to see some others develop as well.   Riker showed us his dedication to his friend.  In turning down the honor of assisting Worf in ritual suicide by pointing out the rightful succession of the task, he not only forced his friend to face the truth of the matter but also showed the lengths he would go to do just that. Never one to blindly follow any request, Riker took the time and effort to study Klingon rituals to understand what he was being asked to do.  This also allowed him to challenge Worf’s request and, in many ways, saved Worf’s life, further developing the kinship between the two men. 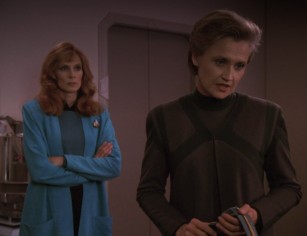 Although several characters had a chance to shine, the true star of this episode however was Doctor Crusher herself.   Usually relegated to a supporting role, Crusher was really able to demonstrate how determined and professional a Doctor she really is.  Crusher cares for her fellow crew members first and foremost.  She is unwilling to compromise them or her ethics when it comes to treating them.  This unwillingness to compromise is challenged by Doctor Russell and, although Russell’s operation ultimately saves Worf’s life, she recognizes that, had Worf not been a Klingon with redundant biological systems, her patient would likely have died.   She is a firm believer in the the ends never justify the means in all things.   Practicing medicine is about being a Doctor first and a scientist second and, in my book, this alone makes her one of Starfleet’s best Doctors.

This episode also raises one of the most outstanding questions in medical practice.  Do the ends ever justify the means?   Basically,  is experimenting on someone, even if it saves theirs or others lives and has a lasting benefit to mankind, ever okay?  This has come up in the real world many times in history, from car companies lying about their emissions testing to the medical atrocities of World War II, and there has always been a heated debate as to its justification.  Doctor Russell here is a consequentialist.  She believes that her actions are morally right as the outcome of her work will be good and will ultimately help others.   The problem with her thought process is that she does not care how many people suffer or die in order for her to achieve her goals. On the other hand Doctor Crusher is more in line with Virtue Ethics or someone who measures their actions against set of virtues.  In this case it is the ethics of the oath she took as a Doctor to do no harm.  There are valid arguments for and against the actions of both Doctors and the episode never gives you a clear answer as to who was right.  This was done largely on purpose as there are always grey areas in everything and it is up to the individual to determine what is right and what is wrong.   This is one of the many reasons Star Trek is not only good science fiction but good storytelling as well.

I still find it interesting how Worf, being raised by humans, can be so ridged in his Klingon beliefs.  For someone who has only fairly recently been able to fully immerse himself into Klingon culture, he sure has some harsh ideas as to what a Klingon is like.  It almost feels like his is the ideal Klingon and in such is not a real Klingon.  Many of his personal beliefs into what it means to be Klingon has been proven wrong time and again.  Like his statement that ‘Klingons do not laugh’.  As we have seen and as Guinan herself has pointed out, ‘ Absolutely they do,  I’ve heard Klingon belly laughs that will curl your hair.”  In today’s episode he is so certain that he MUST commit suicide.  Although Crusher confirmed this as a partial truth, I wonder just how ridged this belief really is.   I often wonder if Worf isn’t trying too hard to be the Klingon he believes he should be instead of the Klingon he is.

Alexander has a genuinely tender moment when he believes his father is dead.  It has all the feels.

We get to see just how far the Klingon spinal ridge goes and it looks like it actually goes all the way down….literally to the feet.

This isn’t the last time we will see the Hegh’bat ceremony being referred to.

We never see or hear from Doctor Russell again.

Thanks for reading the Retro TV Review,  I look forward to discussing the rest of the series with you, one episode at a time every Monday, Wednesday and Friday!  Next Review: The Outcast