It was the 90’s, I was still in high school and, having been exposed to Nirvana and the grunge movement, I was of course a fan of Sonic Youth.  At first I fell into Sonic Youth through the Nirvana frontman’s fandom but, over time, I came to realize that they had a uniqueness about them that I really enjoyed.

You have to understand, Sonic Youth is an acquired taste, they don’t really fit anywhere and that is what makes them so unique and special. When you first listen to them, you will likely wonder how this band was able to record and sell fifteen all original albums, six live albums, a number of other EP’s and releases all the while lasting over twenty years. The trick is simple, they didn’t record the music for anyone but themselves and boy did they like to experiment. Because of this, every album has gems and every song is an exploration in new sounds. That, is why this band is amazing, But what about today’s album? what makes it so special? 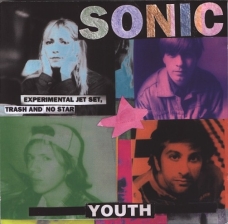 In 1994 an album came out that blew my young mind. I had been listening to Sonic Youth for a while but mostly through borrowed cd’s or copied tapes. It wasn’t until Experimental Jet Set that I finally purchased my first official Sonic Youth album on my own and boy was I pleased with my purchase.

First off, the packaging with cool. Instead of the usual booklet, it had a series of inserts that served, not only as informational, but also alternate covers for this album. I thought that alone was cool as hell and I swapped them out regularly just because I could.

The music itself was a little more melodic than most of the Youth’s fare and that really intrigued me. There was still the insane experimental sound and random noises but layered into their usual ways were intriguing and often thought provoking songs covering every subject from justified narcissism (Self Obsessed and Sexxee) to androgyny (Androgynous Mind). In some moments you find yourself jamming to classic rock sounding tunes and moments later, you are lost in the dreamy voice of Kim Gordon only for her to rip your face off seconds later with her powerful tones.

This is an album that has a multiple personality disorder and I love every second of it’s insanity.

Where do I start? How can I choose? I really cant pinpoint a single track that stands out the most so I will choose two that I think best represents this album.

First off I have to go with Bull in the Heather. Kim Gordon is AMAZING in this track and the band just really tear it up. I won’t lie either, I had such a crush on Kim Gordon when I was in high school.

The next track has to be Androgynous Mind. Thurston Moore takes the lead vocals in this one and it is a crazy fun tune all the way. Hey hey, it’s okay!

I could keep this up all day, but you really should just grab a copy and enjoy the sounds of the mid nineties from the viewpoint of one of that era’s most prolific bands. Sadly, a few years ago, Sonic Youth called it quits. Kim Gordon and Thurston Moore, who had been married, broke up and the band was dissolved. I never got to see them live and for that I am regretful, but I do have their music and oh what music it is.

You can pick up the Vinyl here for around $20 bucks but you won’t get the really cool CD inserts. Sadly they don’t have the CD right now but I have run across it at places like Half-price books on occasion.

If you can’t wait, check them out on Spotify, their entire discography is on there and man are there many many more gems to be unearthed!

I hope this article helped you find a new band or rekindle some love for an old one, if not, then maybe it opened your eyes to new kinds of music. No matter, thanks for stopping by and checking out my blog.