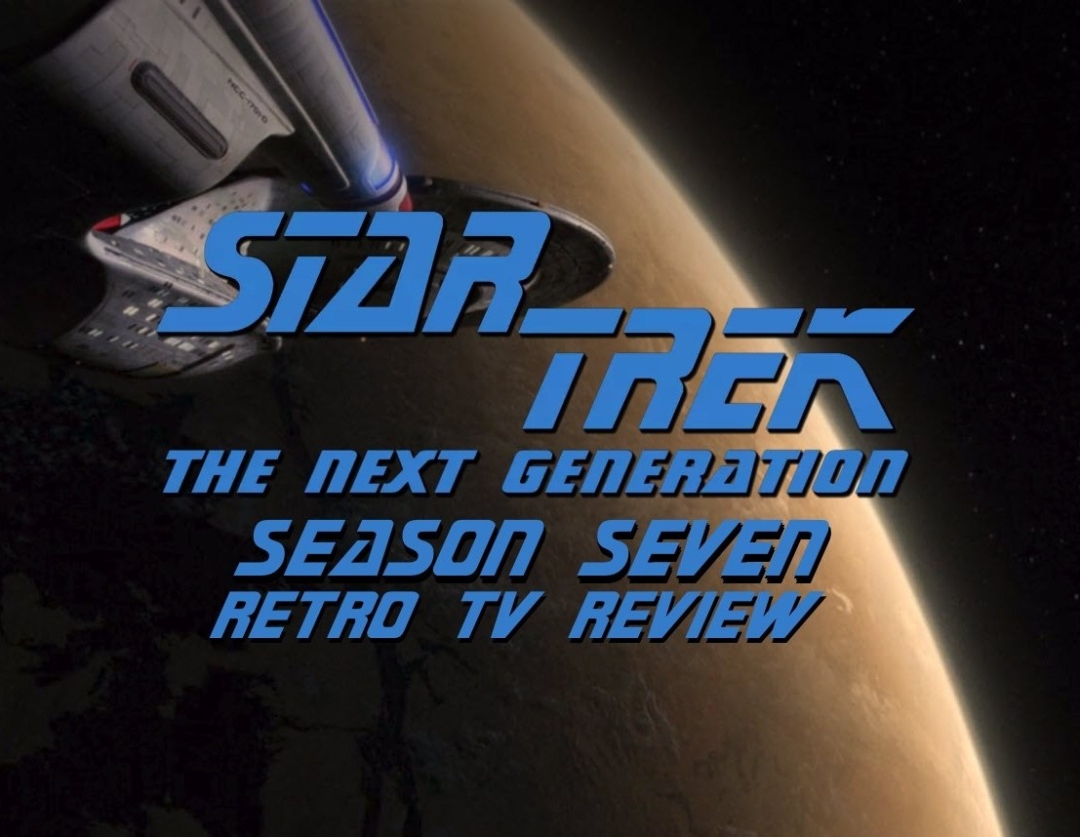 A view from a different angle as we see what things are like for the Junior Officers aboard the USS Enterprise.  Originally Airing on February 7,1994.  This is Lower Decks.

A group of Junior officers begin to question the actions of the Enterprise command crew as things heat up near the Cardassian border. 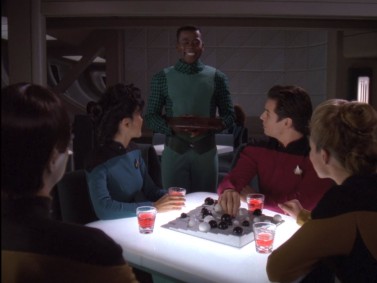 Nurse Ogawa, Ensigns Lavelle, Sito Jaxa and Taurik all relax in Ten Forward worrying about their crew evaluation as Riker and Deanna Troi discuss their performance a few table away.

After having a battle drill on the bridge, Picard arrives and informs Riker that they are rerouting to the Argaya system near the Cardassian border.   Sito and Sam Lavelle discuss their actions and Sam is worried that Sito is the preferred candidate for promotion.  Meanwhile in Engineering Taurik shows LaForge a new alignment that he had learned about at the Academy.  Although Taurik indicates that he has done his due diligence, La Forge does not let the Vulcan Ensign start testing without further research. In sickbay, Nurse Ogawa learns that she has been recommended for a promotion and she is quite pleased at the news.

Sito discusses her possible promotion with Worf only to learn that he was the one that recommended by him for the operations position.  Soon things begin to get serious as the ship picks up a strange life pod.  Picard asks Sito to accompany him to his office where he begins to berate her for her time in Starfleet Academy.  He is clearly unhappy with her presence on the ship after her cover up at Starfleet. Meanwhile in one of the shuttle bay’s LaForge and Taurik purposely damage a shuttlecraft to look like it was in a firefight.   Not long after, in sickbay, Ogawa comes face to face with a Cardassian who needs surgery. 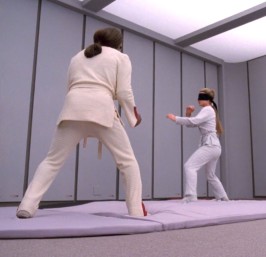 After a poker game, Worf challenges Ensign Sito to the Gik’tal,  a Klingon Ritual that will allow her to move to a higher level in his fighting class.  It turns out that it was just his attempt to show her that she needs to learn to fight back when judged unfairly.  She takes his lesson to heart and returns to Picard to fight back for her position.  She tells the Captain that he needs to judge her for her actions now and not for her actions in her past.  He is pleased with her reaction and he informs her that he wants her to be a part of a special mission.  He also reveals that he was the one that requested her assignment as he wanted to be sure she received a fair chance to redeem herself.

She joins the Senior Staff where she meets with the Cardassian who has been brought on board.  It appears that he is a Federation Operative who needs to be returned to Cardassian space.  She is to accompany him on the mission as his prisoner. Once they are safely across, she will be sent back via an escape pod.  She accepts the mission knowing that she may not return alive. As she leaves, she thanks Worf for believing in her.

The Junior Officers begin discussing Sito’s disappearance, Sam is upset that Ogawa and Taurik will not fill him in on what they know.   The Enterprise arrives at the coordinates where Sito’s escape pod is supposed to be.  They have been waiting for over 30 hours and have found nothing.  After launching a probe they discover the destroyed remains of a Federation escape pod and discover that Sito has been killed in the line of duty.   Picard announces her loss to the crew.

This is one of those rare episodes that really pulls on your heartstrings.  It is amazing how well the writers can establish a small group of characters and make the audience genuinely care about their fates.  What is more astonishing is that only two of the four ‘new’ characters had even appeared on the show prior.  Everything in the episode from the cinematography to the music is done is such a  perfect way that it could be considered one of the best episodes of the season, if not the entire series.

There is a really cool segment in this one that has two poker games going on simultaneously, one with the Senior Officers and the other with the Junior group.  The filming is tremendous as it switched back and forth showing the similarity between their conversations.

The underlying message in this one is one of redemption and fate.  Ensign Sito came from a really rough background, having been partially responsible for the death of a cadet, she came on board the Enterprise with a black spot on her record to begin with.  Picard, in his wisdom, watched her career and wanted to give this young woman a chance in life so he arranged to have her assigned to his ship.  When a chance came, he offered her a chance to prove herself and it ultimately led to her death.  In the end, she went down a redeemed officer in the eyes of Picard, Starfleet and a hero in the eyes of her friends.

I love how this episode continues Ensign Sito story past The First Duty.  For the writers to pluck a character from seasons before and actually give them a full story is awesome.

Taurik is played by Alexander Enberg who would later play another Vulcan by the name of Vorik on Voyager. There may be a relation…

This is the first and last time we meet Ben, the kindly waiter assigned to Ten-Forward.

It was also really cool to see Nurse Ogawa getting a bigger role for once.  Like O’Brien, she has been around for much of the series.

Thanks for reading the Retro TV Review,  I look forward to discussing the rest of the series with you, one episode at a time every Monday, Wednesday and Friday!  Next Review: Thine Own Self