You’ve never heard of this band but that is okay, not many have.  Formed in 1996 this is one of the Seattle bands that came and went without any fanfare but still managed to make a mark on the world for a brief second.  I discovered them via issue 50 of CMJ New Music Monthly and a little song called Northern Lights.  Having only that single song to base my entire appreciation for the band, it would be years before I finally got a chance to hear the source album in it’s entirety and boy was I not disappointed. 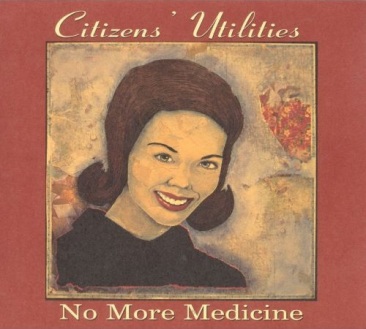 No More Medicine is a bitter pill to swallow, but not because it isn’t any good, quite the opposite in fact.  Before you get a chance to dive in, you need to know that there isn’t much from this band available and, frankly there isn’t much history of the band either.  Heck, they don’t even have a Wikipedia page to help fill in the blanks.

Coming across in the same vein as the Meat Puppets, Citizens’ have a rustic quality to them that is counter to their obvious flair for 90’s Seattle power pop.  It has hints of rockabilly, touches of Neil Young and an original push that you just don’t  hear much anymore.  What is really cool about this band is that nearly every member sings and when they harmonize, it is pretty epic.  Band Members Bill Herzog, Joshua Medaris, Chad Shaver and Eric Akre all are extremely talented folks who put together a second album under the name Citizens’ Utilities that really should have had much more radio play than some others. The only two who seemed to have had much of a career after the end of this band were Herzog and Akre with Herzog still playing in some capacity today.

I am happy to have found this album and add it to my collection, filing it under rare gems.

This is the song that I was originally introduced to.  Northern Lights.  When you listen to it, you will know why I love this album and why I had to find a copy for myself.

Next up. Bottleneck.  This one just really showcases the pop talent of the quartet.

Heave Away is about as folky as they get but it is so good.

My usual go-to failed me on this one but I am not surprised with how relatively unknown this album is.   I will send you to Discogs where you can find a copy for around $3 or, as if by a miracle in it;s own right, you can also listen to the album on Spotify.  Yeah, color me shocked!