The Twilight Zone has been a mainstay for me for most of my life. Along with Star Trek, The original Twilight Zone series was a one that I would watch regularly with my dad. Every night in syndication we would watch another of Rod Serling’s classic tales and I would find myself swept into another dimension, a dimension not only of sight and sound, but of mind.

Fast forward 60 years later and once again the journey into imagination has returned. This time however, writer Director Jordan Peele is at the helm and, after two successful films, he takes on the classic that started sixty years ago.

So, let’s explore the latest episode of The Twilight Zone. Replay.
The Episode:

On a road trip to take her son to college, Nina wants nothing but to document the experience with her classic handheld camcorder. She soon discovers, however, that her camcorder can turn back time and she begins to use it to prevent the death of her son, Dorian, at the hands of a racist state trooper. Starring Damson Idris and Sanaa Lathan, this is a time bending story that can only take place in The Twilight Zone. 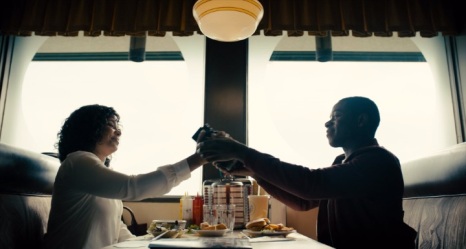 If you had the power to turn back time with the simple press of a button, to prevent something terrible from happening, would you? Even if the consequences of such a power could be potentially worse?

While this is the basic question asked in this episode, the story itself uses this premise to tackle the subject of police brutality and racial profiling head on. Nina (Lathan) is a lawyer taking her son to college when she encounters a racist cop who is hellbent on hurting her and her son. Things get strange when she discovers that her old camcorder has the power to literally rewind time. Through this power she continuously attempts to alter time in order to prevent one of many horrible attacks from the cop, played by Glen Fleshler. Unfortunately, with every attempt to change the past,she only succeeds in making the next encounter with the trooper that much worse. 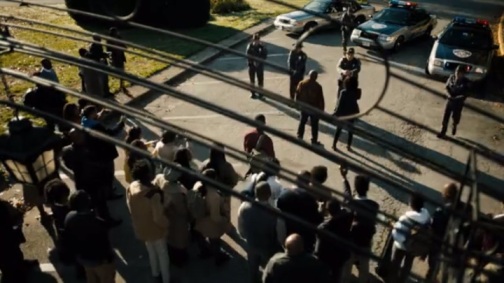 Much like the Twilight Zone of old, this is a morality play on several levels. On the surface it deals with the dangers of altering time while using the all to real danger of ‘driving while black’ as a catalyst for the story. Nina and her son find themselves relentlessly pursued by a horribly racist Trooper who is determined to do all he can to make life difficult for the innocent woman and her son. No matter what Nina or her son do to appeal to this man’s better nature, even buying the man a meal, it only results in a significantly worse outcome. 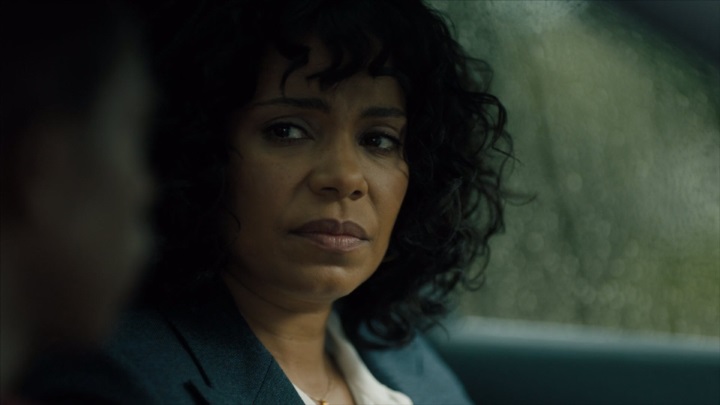 This in itself is a parable of one if today’s issues with police killing innocent people. Every day in the news we are faced with another story of a cop or officer of some sort going to the extreme in his or her duty in events that only end in tragedies that should never have taken place. Many counter with the comment of ‘well if that person would have remained calm the cop wouldn’t have done that…’ or ‘ well the cop felt threatened’. I could go on but this kind of statement is just a denial of the truth. In many cases, however, no matter what option the victim took, the outcome would have been the same.

Through the use of the camcorder we see this very thing occur over and over. In her attempts to save her son and herself, Nina takes every option imaginable only to find herself in similar situations without end. Tragically, as this series is not one to soften the blow, she soon discovers that no matter how hard she tries to prevent the inevitable, the fate of her son has been sealed.

Overall, This is a deep story that is a statement on the unfortunate reality of profiling and racism in today’s world. With a wonderful cast and a strong message, it is episodes like this one that make this series so very important. Maybe, through these works of fiction a few minds will be changed or a few ideas for a better tomorrow will be planted making it so those ideas will no longer only live in The Twilight Zone.

I look forward to what other stories this series has to tell.

On an interesting note, this episode takes place in the the Busy Bee Diner which happens to be the same Diner as the classic episode ‘Nick of Time‘ and even shows the plot device of that episode known as The Mystic Seer.

Next Episode: A Traveler

Thanks for reading the SciFi TV Review I look forward to discussing the rest of the series with you!