Elam Garak and his past comes to a head in the episode that originally aired on April 24,1995, this is Improbable Cause.

After a bomb destroys Garak’s shop, an investigation ensues leading Odo to discover a dark truth. 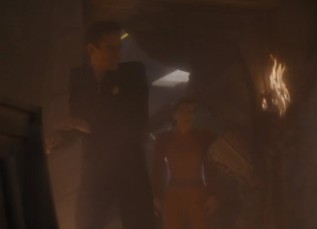 Sharing a meal with Julian Bashir, Garak observes that the Doctor is an impatient man who rushes through life. Just as the Doctor heads to the infirmary, an explosion rocks the promenade and Julian is shocked to see that Garak’s shop has exploded.

After Garak is rescued from the burning shop, Odo and the crew begin an investigation on the explosion.  Odo believes that the explosion was on purpose and they soon find evidence that implies just that.  In the infirmary, Odo and Sisko discuss the matter with Garak, who is determined that it was just an accident and, even though he might have been in the Obsidian Order in the past, refuses to accept that someone tried to assassinate him.

As Odo continues the investigation, O’Brien discovers evidence of a pheromonic sensor that may have been planted by a Flaxian assassin and there happens to be a Flaxian on board the station.  Odo soon conducts a interrogation of the visitor only to find that he has chemicals that can create poisonous gases but no explosions.  The Flaxian is released but instructed to remain on the station until further notice.

Miles plants a transponder on board the Flaxian’s ship and waits for the assassin to make his departure.  Watching the Flaxian head to the docking bay, Odo boards his craft only to find Garak waiting on him.  Unhappy with the Cardassian’s presence, Odo argues with Garak asking him to depart.  Garak convinces Odo to let him accompany the shapeshifter and, as soon as they catch up to the Flaxian ship, they are shocked to watch as the Flaxian craft explodes.

Back on the station, the team determines that the Flaxian was killed to cover up the attempted murder of Garak.  Odo believes it may be the Romulans who are out to get the Tailor but Sisko isnt so sure.  When they contact the Romulan government they are shocked to find that they freely admit to the death of the Flaxian captain and the destruction of his ship.  It is clear that they are not admitting to everything but it is clear someone is out to kill the Cardassian Tailor.  In their discussion, Odo informs Sisko that he still has some contacts in the Cardassian Government and requests a runabout to visit one of them.  With the runabout, he finds his contact and learns that there is more at stake than just Garak.  It seems that the Romulans have been mobilizing near the Cardassian boarder and may be planning an invasion.  Odo also learns that five other operatives for the Obsidian Order died the same day of the explosion.  The Contact gives Odo information about the contacts who had died.

Odo shares the information with Garak and accuses the tailor of blowing up his own shop to get Odo involved.  After much debate, Odo finally gets Garak to admit that he and the five other operatives were associates of Enabran Tain. Asking to use Odo’s communication systems, Garak contacts Mila, Tain’s Housekeeper, who promises to connect the two of them.  Odo and Garak head out to find Garak’s old mentor.

Upon arrival, they are shocked to find a Romulan Warbird decloak in front of them.  They are soon taken aboard the craft where they find none other than Enabran Tain himself.  It appears that Tain is mounting a joint Cardassian-Romulan fleet that intends on travelling to the Gamma Quadrant to take down the Dominion by eliminating the Founders themselves.

After hearing the plan, Garak informs Tain that he came to save his old mentor and Tain soon offers to let Garak join Tain in his mission.  Garak can not resist the offer and tells his mentor that he accepts that he is back. 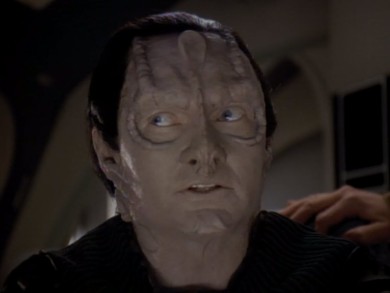 We finally get a deeper peak into Garak’s past and it is fascinating.  It seems that Garak is indeed a former member of the Obsidian Order and has been waiting for Enabran Tain to forgive him for what ever it was that the Tailor did to cause his exile.

Garak has been a fascinating side character since the beginning of the series with the writers planting subtle seeds of half-truths and lies about Garak’s past.  Throughout that time we have only been able to piece together bits and pieces of this mysterious figures past only to discover that much of his stories were lies or embellishments that brought doubt to everything we have learned. I love it when writers have fun with their worlds and this one is no exception.  It seems, the more mysterious a character, the more entertaining they are!

The episode itself is a fantastic story building on elements from previous episodes such as Garak’s growing back story and the secret armada being built by the Obsidian Order. This is a prime example of why many Star Trek fans consider Deep Space Nine to be the superior series in the franchise, it was not afraid to have repercussions for things done (or not done) in past episodes, making the series feel like a complete picture by it’s end instead of just a string of adventures held together by only the fact that the same characters were involved in each adventure.  While they were far from perfect at it, DS9 had something that most of the other series lacked, continuity.

Thanks for reading the Retro TV Review,  I look forward to discussing the rest of the series with you, one episode at a time every Monday, Wednesday and Friday!  Next Review: The Die is Cast