This is it, The Star Trek The Next Generation Season Two Finale.  What awaits us in this episode?  Will it be the inevitable confrontation with the Romulans or will we finally see the epic space battle between the Federation and The Borg?   Will Q come back and wreck havoc aboard the Enterprise? Will Wesley become a Starfleet Cadet?  Will Data become a real boy?  You want the answer?  The answer is none of that.  What we get instead is a freaking clip show.  Do you know what a clip show is?  It’s when a series needs a budget episode and uses footage from previous episodes as memories.  Needless to say this will be a quick one and in a couple days we will jump into Season 3.   So, let’s get this over with.   This is Shades Of Gray, originally airing on July 17,1989.   I don’t know why I’m bothering with this one….

Riker is gravely wounded and a parasite is invading his system. The only way for Pulaski to save Riker is to make him relive his worst memories. 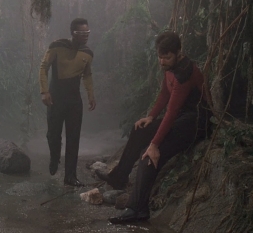 Exploring  an alien Swamp, Riker is struck in the leg and is infected by strange microbes.  Pulaski beams down to the surface (much to her dismay) to check out Riker as the transporter is detecting a foreign lifeform it can not filter.   Upon arriving she authorizes his immediate transport to sickbay where Riker begins to have more severe symptoms.

Pulaski determines that the microbes are infecting and growing much quicker and deeper than she can immediately remove.  If she can’t stop the infection, it will reach the brain and Riker could die. She asks for someone to get additional samples of the parasite so that she can study it further to find a cure. Data and Geordi beam down and  find a plant like creature that tries to attack Geordi and manage to collect the samples needed.

Troi comes to visit Riker and as they talk, Riker passes out.  The infection has spread to his spinal column.  Doctor Pulaski attaches a big brain analyzer to his head and…

At first they are random memories of him as beardless Riker, makes sense since that was him at his weakest. hehe.   The first memories are pretty basic, neither good nor bad and mostly consist of scenes where he met the crew and other key people in his life.

They notice that the virus’ metabolism has changed with the memories and Pulaski alters the brain waves.  He then has happy memories which causes the virus to spread and the happier they are, the faster it spreads.  Obviously most of his ‘happy memories’ are of his romantic entanglements the from the past two seasons so I will spare you the details.

Pulaski discovers that the pleasant memories are causing the virus to spread and must force bad memories onto Riker to stop the infection.  These memories includes the deaths of Tasha, Troi’s son, and more.

Using this information they eventually save his life but not before we pretty much get a full recap of the past two seasons.

The main story isn’t bad but the fact that half the episode is a clip show is pretty disappointing.   I have seen far worse clip show treatments and this one actually tries to make it interesting.

For those of you unfamiliar with the term ‘Clip Show’, this refers to television programs using old footage to fill out an episode due to budget restraints.  Season 2 of STNG had a major issue with a writers strike that severely limited what they could do, so the finale ended up being a clip show itself.

As it is, no, this is not a ‘good’ episode.  In fact, it is one that could have been completely scrapped without losing a single beat. Had they ended with the previous episode, it would have made a far better finale.   Let’s move on shall we?

Riker makes a comment about his grandfather being so ornery that when a rattlesnake but him, it died instead of him. Seriously, that’s all they could think of?

Well, that’s season 2 of Star Trek the Next Generation. For all of it’s ups and downs it had gained an audience and big, wonderful changes were in store for season three.

See you in a couple days!