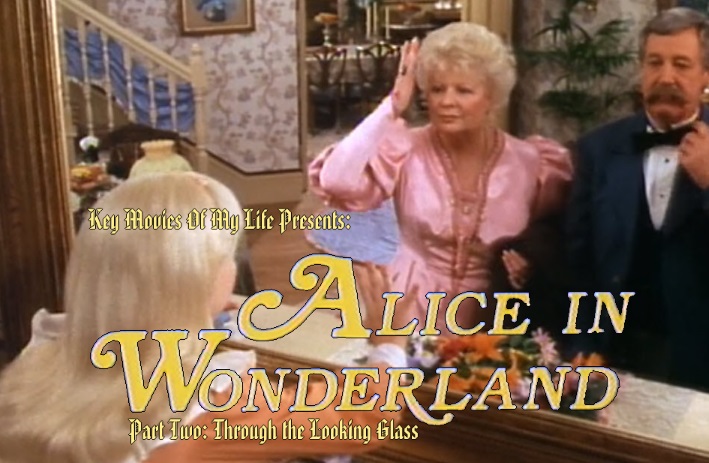 Key Movies Of My Life: Alice In Wonderland Part Two: Through the Looking Glass (1985)

Nearly everyone has a film from their childhood that they can recite line for line, one that, even if they haven’t seen it in years, they know nearly every frame by heart yet still adore that movie. In 1985 CBS aired a two part mini-series depicting the adventures of Alice as she traveled through Wonderland. Filled with some of the biggest stars of the era, this was a monumental series that still resonates to this day. As the tv movie special was broken up into two nights, each night a feature length episode of it’s own, I felt that this one deserves two separate reviews. So here is Alice in Wonderland Part Two: Through the Looking Glass.

After believing she has made it home at the end of Part One, Alice is surprised to find herself on the other side of the Mirror and must become a Queen in order to return home. Featuring the talents of Anne Jillian, Carol Channing, Harvey Korman, Pat Morita, Beau and Lloyd Bridges and more, this is the more uncommonly told part of Alice’s Adventures Through the Looking Glass. 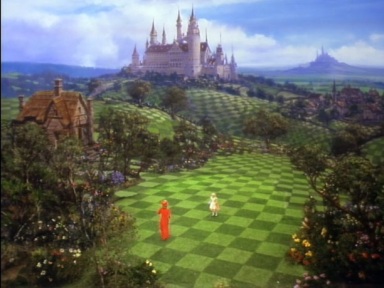 In 1985 a two part movie like no other was aired creating a television event that had everyone glued to their screens. This film became an instant classic as remembered by children of the 80’s as the 1951 Disney version was to their parents. Produced by the famous Irwin Allen with songs by Steve Allen, this is one of the most definitive versions of the Lewis Carroll classic.

Interestingly, in the majority of the Alice in Wonderland adaptations the Through The Looking Glass segment is either blended into the first story or just left out all together. What people don’t realize is that the Looking Glass segment is one of the most important part of Alice’s adventure, this is where she gains the maturity necessary begin her journey into adulthood. 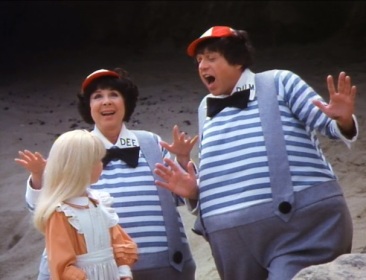 With how wonderful the first part was, of course we all gathered round to see part two the following night and were not dissapointed at the results.

As I mentioned above, this part further dives into Alice’s journey into adulthood as she faces the surreal and often cruel world of Looking Glass Land. It is in this journey that she finds herself facing the likes of Humpty Dumpty (Jonathan Winters), Tweedledee & Tweedledee ( Eydie Gorme and Steve Lawrence) , the Lion and the Unicorn (Ernest Borgnine & Beau Bridges) and of course the fearsome Jabberwocky itself played by Tom McLoughlin who also happened to direct one of the Friday the 13th films a year later.

As engrossing and entertaining as part one, this one always struck me as a darker and more mature tale overall which is fitting considering. In many ways, as an adult, I find this segment to be the superior of the two with some of the most iconic songs and moments including a very impactful (and rather disturbing) rendition of the classic Walrus and the Carpenter tale as told by Tweedledee and Tweedledum. 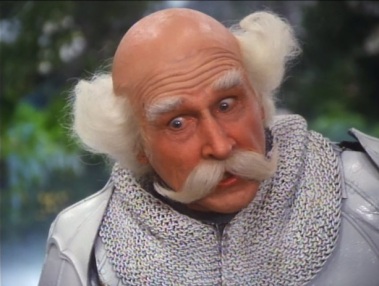 One of the biggest standouts to me is the role of the White Knight played by Lloyd Bridges. This is one of the only people in the story that actually seems to care for Alice and does all he can to protect her as he guides her to her final step to becoming a Queen. Their time together coupled with his song is one of the most endearing moments in the film, making you want to know more about his character and his past prior to the arrival of Alice. It is unsurprising that with a talent of this level, that he would be one of the most well developed characters despite his short time on the screen. 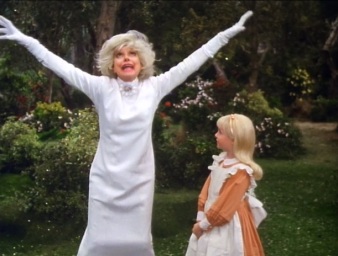 Another is that of the Carol Channing. Channing plays the White Queen in this one and her squeaky southern voice lends well well her frantic and slightly insane actions, making her character the perfect personification of the madness depicted in the classic Lewis Carroll tale. While her performance was amazing, she was also one of the more frightening elements of the film as she transforms into a sheep in a rather disturbing scene that remains with me to this day.

Overall, this is one of the most fantastic tv movies of it’s time that manages to hold up well with fantastic songs and impressive special effects for 30+ year old tv special. Even as an adult, I find both parts of this film to be a delight and well worth revisiting, even the frightening bits.

You can pick this one up on disc but be careful, any of the releases before 2006 are edited versions that leave out some key moments from the original broadcast. If you want to get the full experience I recommend the newest restored edition or just watch it on Amazon Prime which is currently the only digital streaming version available.

There are no trailers I could find for this one so I figured I’d present one of the songs for you. Good stuff!