It may have been the end of a decade and music may have been changing but there were still some incredible albums arriving at the end of the 90’s.  With a new decade and century ahead this was an album that helped usher me into the new world beyond. 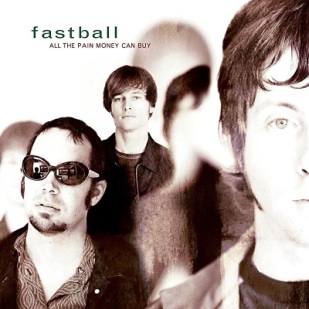 While I would love to say I was a fan of their since their inception, Fastball is another 90’s band that I fell in love with due to a music video.  The video is one that pretty much everyone witnessed sometime in late ’98 and man was it something special.  The song was The Way and this Austin Texas band had a sound that really made them something special and surly caught my ear. Needless to say, the music video did it’s job and it would not be long before I picked up the album ‘All the Pain money can buy’.  Immediately I discovered that this was a band that was much more than a one hit wonder, in fact, these guys had an incredible talent.

Leading the album off was the hit song ‘The Way’ with one of the coolest music video’s I had seen at the time. With a crazy meta theme, it depicted the band watching televisions and seeing themselves in music videos across time. Interestingly enough the video was by the now fairly well known director McG who is responsible for quite a lot of television and movies you have probably enjoyed since.

The album itself is an instant classic.  This is one that almost defines 1999 in terms of pop rock and alternative music.  99 was a strange year with all manner of albums in every genre dropping throughout the months.  Everything from Brittany Spears to Powerman 5000 with even Carlos Santana getting into the game by performing with popular artists to maintain his relevancy with the then current generation.  Music was evolving into something more manufactured in the terms of more boy bands and teenage diva so Fastball’s unique sound was a bright spot to me and many like me.  Fastball’s album was full of style and substance, consisting of a blend of great rock songs to introspective tunes about small towns. I loved how, much like the Beatles, Miles Zuniga and Tony Scalzo would alternate singing songs, even harmonizing at times, giving the collection presented a nice varied texture that kept the album interesting throughout.   Every song was super relatable and, hailing from Texas myself, it was nice to know that this trio was composed of some of my own.

As with most bands I discover, I soon found myself diving in and soon tracked down their first album, Make Your Mama Proud.  While I originally didn’t find it as good as All the Pain, it is an album that has since grown on me and now has a few of my favorite Fastball songs on it.  It would not be long before I found myself picking up each of their new albums as they released and looking forward to more Miles Zuniga, Tony Scalzo and Joey Shuffield.  Interesting note, unlike many bands that have lasted as long as Fastball, this band has managed to retain their original lineup for pretty much their entire run.  Having seen them live for the release of their 2017 album Step Into Light, I have to say, they have really aged well.

Which Way To The Top

I love the slow groove of this one.  With guest vocalist Poe harmonizing with Miles Zuniga, it is such an easy song to lose yourself in.

Another Zuniga song that, even though I don’t smoke, I could relate to the images of laying in bed in the middle of the night thinking about life.

Zuniga has a way to really bring the emotion and for some reason this is yet another that I adore.  It’s subject may be a real place but it describes just about every small town in Texas.  The open air, the miles of flat land all around, these towns are some of the only ones on Earth that can make you find a certain solitude among the thousands that live there.  This tune nails that feeling perfectly.

Finally, Out of My Head.

This one is Tony Scalzo and boy is it an introspective tune talking about missed opportunities and the remembering past losses.   Everyone can relate to this one especially when it comes to ‘the one that got away’. Scalzo nails the tone and feel with this rather bluesy tune I will always love.

You can pick up a wonderful expanded edition here for around $15.  Not only does it have the full album but some fantastic demos and acoustic versions of the hits.   Either that or just go to Spotify for the original release, either way, give them a go!