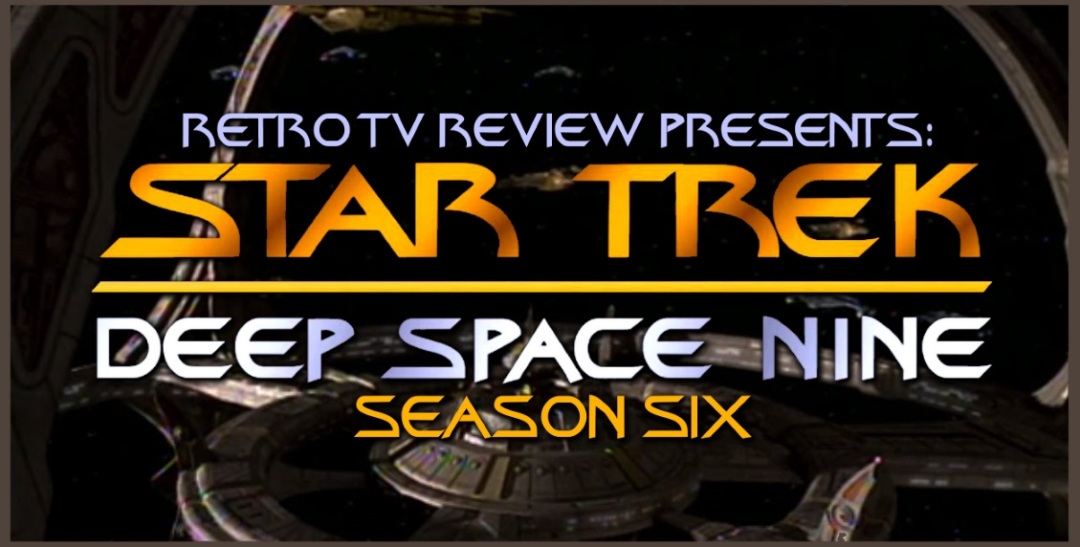 The crew deal with a communication from some who they may not be able to save. Originally aired on June 10,1998, this is The Sound of Her Voice.

On a routine mission the Defiant encounter a distress call from a Starfleet Captain only to find they may not be able to rescue her. Keeping her company through her time on the planet via communications, the crew work to find a way to save her before it is too late. Meanwhile, Quark discovers an opportunity in Odo’s new found love life.

Story A: I hear dead people

Returning from a routine escort mission, Sisko and crew head back home with Cassidy Yates on board the Defiant with them. Just as it seems the trip will be uneventful, the ship receives a distress call from the captain of a Federation star ship. Even though it is out of the way, Sisko orders the ship to head toward the distress call in hopes that they can get there in time to rescue this officer. 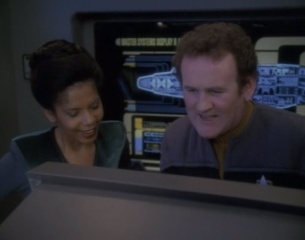 As they head toward the distress call, O’Brien begins working on a two way communication with the lost officer but soon finds it more difficult than he expected. Listening to Lisa on the comms, O’Brien is determined to find a way to contact her. Soon Cassidy arrives and begins asking if it is uncomfortable having civilians on board the ship. Just as O’Brien is about to answer they are interrupted by Lisa who indicates that she can hear them over the comms.

They soon learn that they are talking to Captain Lisa Cusak of the USS Olympia. She and her crew had been returning from an eight year mission from the Beta Quadrant when they encountered a strange planet which inadvertently caused her ship to crash. She has been stranded alone on the planet desperately trying to contact someone. Knowing that she has been out of touch for the better part of a decade, Sisko begins to fill Captain Cusak in with the recent events of the Dominion War. Soon she asks Sisko for some good news, hoping that the war isn’t the only thing worth talking about. Soon they begin talking about Cassidy Yates and Sisko’s relationship with her. 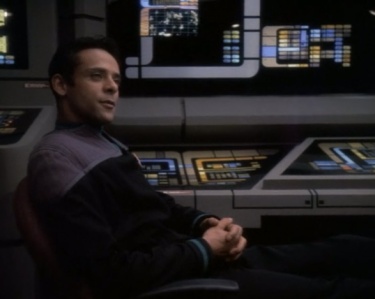 As they head toward Lisa Cusak, the crew begin taking turns keeping her company with each crew member developing a relationship with each conversation. In that time each of them find a comfort in comforting her some using her as a sounding board while others using her as a councilor. As they converse, Bashir soon realizes that Captain Cusak is losing time as the medication she has left is not enough to keep her alive long enough to save her.

Determined to find some way to get the ship there more quickly, Sisko orders them to use the phaser reserve to enhance the engines. As the ship rushes to their destination, it soon becomes clear that Sisko and Cassidy are having relationship problems. Sisko begins discussing the matter with Lisa. 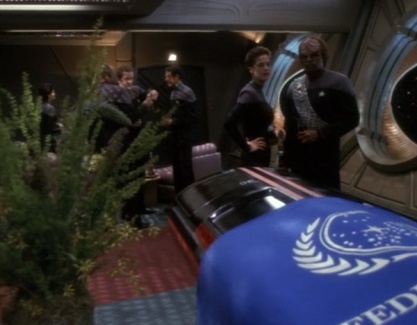 Arriving at the planet the Defiant begins scanning for a way to get past the barrier in order to rescue Captain Cusak. Discovering they have no way to beam her off the planet, Sisko, Bashir and O’Brien take a shuttle through the barrier in a last ditch effort to save their new friend. Making it through intact, the three quickly find the crash sight but are concerned when there are no lifesigns. Arriving at the cave she had been using for shelter they soon discover the desiccated remains of a Starfleet officer. It appears that Captain Cusak has been dead for three years and two months. Somehow her subspace signal time-shifted through the barrier allowing them to talk to Cusak in the past. Sisko chooses to take Cusak’s body back with them so that she is given a proper sendoff among friends. At the wake, Sisko makes an attempt to make amends with Cassidy agreeing to discuss their relationship at dinner. 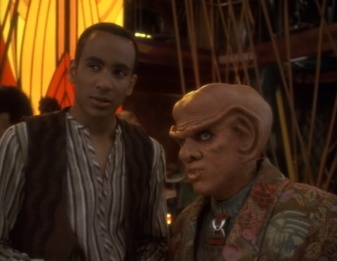 Odo starts his day off giving Quark a hard time over his new bar-stools. However, just as things look problematic for Quark, Kira stops by and Odo’s demeanor changes in an instant. Recognizing the shift in the Constable, Quark begins plotting a way to exploit it.

Odo soon returns to the bar to give Quark more grief but the constable is quickly distracted when Quark points out that the coming weekend is Odo’s first month with Kira. Quark warns Odo that if the constable fails to get Kira a gift, he will find himself in trouble and soon manages to distract Odo by the suggestion. Jake, watching everything going down, asks Quark to allow the budding writer to watch the Ferengi in action. Quark reluctantly agrees to let Jake ‘learn about his business’ as long as Jake agrees on a certain confidentiality.

Continuing to use the constable’s love as a distraction, Quark begins making plans on how he will profit from Odo’s romantic interlude. Quark is thrown off when Odo informs the bartender that he will be busy a day later than expected throwing Quark’s plans off with no way to change them. Soon Quark shows Jake the product that is at stake indicating that there is no chance he can move the product now that Odo has changed his plans. Quark is disappointed that he will not be able to complete his deal even though he has been there for Odo every step of the way. Unknown to him, Odo has been present the entire time. 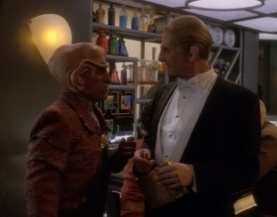 As Quark laments his pending failure, Odo surprises him by walking into the bar dressed in a full Tuxedo with Kira in tow. He indicates that Kira wants to celebrate that night and Quark agrees to let Odo use the holosuites that night. Thinking his luck has changed Quark is convinced that he finally beat his nemesis. As Kira and Odo head to the holosuites she asks if he really wants to let Quark get away with this crime. Odo indicates that he owes the troll one and only one. 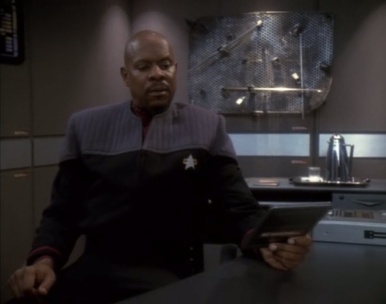 I love episodes that allow for some character development or at least showcase the characters in ways that enhance their roles and this one does both very well. In their journey to save the ill-fated Captain Cusak we learn a lot about the crew aboard the Defiant. Sisko shows that he is having difficulties blending his relationship with Cassidy and his responsibilities as a Captain. Julian learns that he has become distracted by his own work and has been avoiding interpersonal relationships and Miles finally opens up about his PTSD from his past experiences and his current ones. The common factor among them all is the disembodied voice of Captain Cusak who, somewhat ironically and unknown to them all, no longer has any problems of her own. 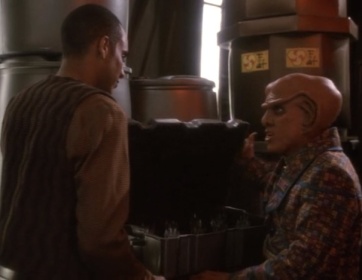 The B story is pretty clever in it’s own right with the relationships between Quark and Odo and Odo and Kira being used to really define where they stand with each other. It has always been suspected that Odo and Quark are really friends despite their opposing natures and this one gets us closer to that answer. While they may not actually be ‘friends’ Odo’s willingness to allow the Ferengi to have a ‘win’ albeit an illegal one, shows just how much he cares about Quark’s feelings. That and how Odo understands the need to allow someone a win every so often to keep them off their toes. I mean, Odo isn’t stupid, had he pressed the matter Quark would have only gotten sloppy and probably got himself and others killed in the process. This win was a great tactical advantage allowing Odo to choose when and where a crime took place without having to worry about the fallout. You can guarantee that Odo keep a record of this one, just in case.

Overall, a great penultimate episode that really sets the tone for the season finale. Trust me, this next episode is a tough one and I am not saying that lightly. 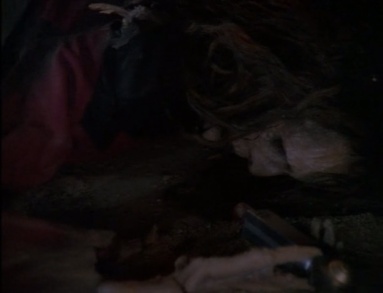 Thanks for reading the Retro TV Review, I look forward to discussing the rest of the series with you, one episode at a time every Monday, Wednesday and Friday! Next Review: Tears of the Prophets