And we are back to the Mirror Universe, only this time it’s for business purposes.  Originally airing on February 3, 1999, this is The Emperor’s New Cloak.

After the Grand Nagus is kidnapped, Quark and Rom find themselves heading to the Mirror Universe to save their leader and maybe make some profit in the process.

As Quark laments Julian’s interest in Ezri to Odo, Rom arrives with news that Grand Nagus Zek is missing.  It seems he is seven days late from his most recent business trip but Quark is not concerned.  Later that night, after his nightly prayers (where he prays to have Ezri fall in love with him, he is surprised when Ezri herself arrives but is acting a little different.  Soon she informs Quark that she is from the Mirror Universe with a message from Zek and it soon becomes up to Quark to save his Nagus by trading the Ferengi leader for a Cloaking Device.

With only three days to come up withe the Cloaking Device, Rom and Quark steal the docked Bird of Prey’s cloaking device in order to trade it for Zek’s life.  Making the trade, Quark and Rom join Ezri in the alternate universe just as Martok comes to claim his ships cloaking device.

Now in the Mirror Universe the trio soon find themselves face to face with Vic Fontaine but a rather none-holographic version.  No sooner do they meet than Vic is shot by Bashir who promptly locks the two Ferengi up claiming that they are Alliance Sympathizers.  Now captured by the rebellion, they are given the decision to either try to rescue Zek or head back home. Quark, never one to pass up on a chance to suffer decides that they have to rescue the Grand Nagus.

As they begin their planning to escape they are surprised by the arrival of Brunt who breaks the trio out of their captivity.  Rom and Quark are shocked at how nice Brunt is, compared to their own, but soon learns that he is only working for the Alliance because of his dedication to Ezri.

Arriving on the Regent ship, Quark and Rom are shocked to learn that the Regent is none other than Worf himself.  Quark is shocked when he learns that the deal he made for the Cloaking Device was not what he thought it was and, in fact, never really existed.  The trade was, in fact, for Intendant Kira and soon the Ferengi brothers are imprisoned with Grand Nagus Zek.

As Quark and Nog catch up with Zek, Brunt is having a hard time with the brother’s incarceration.  Confronting Kira, he is soon killed by the Intendant making Ezri realize that she may be on the wrong side. With that in mind, Ezri frees the Ferengi in order to help get the Cloaking Device operational but only Rom takes her up on her offer. With the Cloaking Device fixed, the Regent heads into battle against the ISS Defiant but orders Quark and Rom to death despite Rom’s assistance. 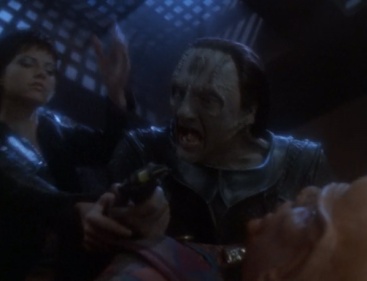 Garak informs Quark, Nog, Zek and Maihar’du of the method of their execution and, just as he is about to go through with it, the Ferengi turn the tables on him.  Claiming the Mirror Universe Garak is lacking in his interrogation skills, they manage to make their escape when the cloaking device goes out and Ezri arrives just in the nick of time.

With the Regent’s ship disabled, The ISS Defiant takes advantage of the situation and claims victory over Regent Worf.  The Regent once again slips away and, when Ezri realizes that she owes Kira her life, she lets the evil Bajoran leave on her own accord. Before they leave, Quark offers to stay a while to help Ezri acclimate but, when Leeta arrives to Debrief the Trill, the Ferengi’s find themselves returning home empty handed.

I typically love the Ferengi-centric episodes and this one is certainly among my favorite ‘fun’ episodes. While it really has no place in the overarching story of the season, this episode is a nice island of fun before the rather intense back half of the series.  We are approaching the end game so enjoy these little islands of fun before things get really dark.

The Mirror Universe is a conundrum in and of itself.  While I loved the original return to this universe in season two, I felt that, over time, the existence of this universe seemed to be used a little too often.  With an episode involving the Mirror Universe in five out of six seasons, this seemed to be Deep Space Nine’s running callback much like Q was for The Next Generation.  Yes, some of them were fun episodes but they never really felt like these encounters had any lasting repercussions even when dealing with dead loved ones and the like.  That is why this one kind of stands out.

Throughout the episode Rom calls out the absurdity of the Alternate Universe and how nothing really makes sense. This gives us some wonderful near fourth wall breaking moments as the series fully acknowledges through Rom that the Mirror Universe is really just a silly trope. At it’s base level the Mirror Universe is supposed to be the opposite of our own, so those who are evil are good and the reverse is also true.  While this is a simplistic view of this alternate universe, the universe itself seems to have a bit of an identity crisis and a very interesting history to say the least. I mean, the mirror version of Vic Fontaine is a living human?  What the heck? How does that even make sense? Anyhow, While recent efforts from Enterprise to even Discovery have played in this alternate realm, frankly, I think we need to give it a break.

All that aside, Michael Dorn, Nana Visitor and Nicole De Boer do an incredible job as their mirror selves. While this universe may be played out a bit, these three are simply incredible at playing evil versions of themselves. Now,  if CBS wants to really make the Mirror Universe a thing, then how about a full fledged ‘Mirror Universe Invasion’.  Lets make the threat…themselves.

Overall, this was a fun episode and one that, while not ‘important’ in the grand scheme of things, is really a very memorable one. 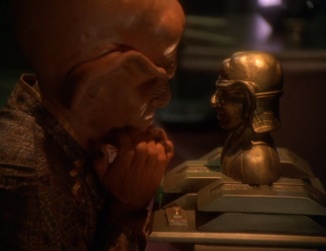 Thanks for reading the Retro TV Review,  I look forward to discussing the rest of the series with you, one episode at a time every Monday, Wednesday and Friday!  Next Review: Field of Fire