Light beings.  Webs in space.  An Imaginary friend who wants to kill the crew of the Enterprise. All in the episode that aired on May 4, 1992.  This is Imaginary Friend.

When the Enterprise travels through a mysterious nebula a young girls imaginary friend becomes real and begins to cause trouble aboard the ship.

After a talk with a young girl named Clara Sutter, the Enterprise enters a nebula and picks up a stowaway in the form of a ball of light.  The light travels throughout the ship until it finds Clara working in the arboretum and becomes the living embodiment of Clara’s imaginary friend, Isabella.  Isabella asks Clara to show her around the ship and, despite her reluctance, Clara takes her.

In Engineering LaForge and his team are working on strange issues with the ships velocity.  Soon, without their assistance, the problem corrects itself but only after Isabella vanishes for a moment as she and Clara tour the ship. Clara continues wandering through the ship and ends up in Ten Forward where she encounters Guinan.  Clara begins to talk about her imaginary friend with the barkeep until Troi arrives to take the young girl away.  Troi discovers that Clara’s imaginary friend is getting Clara in trouble and it is time for Clara to be with friends her own age.  Troi makes arrangements with Clara’s Father, Ensign Sutter, to get Clara with other children.  When she arrives to inform Clara of her intentions she informs Clara that they are going to play without Isabella.  Isabella is not happy about this.  Soon the Enterprise begins having issues with movement again and they discover a ‘web’ of energy throughout the Nebula. 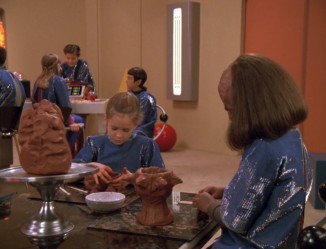 As Clara plays with Alexander at the school, Isabella begins her attack on other people.  At first it is only small things like knocking over coffee, then she breaks Alexander’s art project in class. Clara runs away but is followed by Isabella who is now upset and tells Clara that, ‘when the others come, [Clara] can die with everyone else.’

The web around the ship increases and it becomes clear that the Enterprise is at risk of becoming trapped.  While talking to Guinan in Ten Forward, Troi is summoned to Ensign Sutters quarters who indicates that Clara is unable to sleep due to Isabella.  Clara explains to Troi that Isabella is real now and then Isabella appears.  Isabella attacks Troi, knocking her out.

Picard and crew soon discover that Isabella is a life form that has come to investigate the ship and determine if they are a threat.  The beings soon find that the Enterprise is a great source of energy and they have deemed them as unworthy to live as they have been cruel to Clara.  Picard realizes that they have been seeing humanity through the eyes of a child and negotiates their release.  Picard sends the beings energy and they leave the Enterprise alone.

Overall there is no moral or lesson of any sort, there is no real character development either it is just a decent Sci Fi/horror dealing with an unknown species and imaginary friends. It’s a filler episode with a fairly weak ending but it’s a pretty cool story overall. 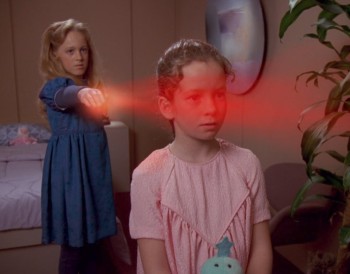 Clara originally describes Isabella as ‘tall with earrings’ but the physical version of Isabella isn’t that tall and certainly doesn’t have earrings.

We learn that Guinan had an imaginary friend in the form of a Tarcassian Razor Beast.

We see a few more of the kids on the Enterprise, including a Vulcan boy along with Worf’s son, Alexander.

We never see nor hear from Ensign Sutter nor Clara.  I guess he got transferred…again.

We also never find out who the light creatures were.