I have heard it said before that change is the only constant. Many people face some kind of change every day, for some it is a simple thing like changing the flavor of their coffee. For others it is a more radical thing like changing a job or changing their very lives.  This episode is about change and it is a change that none of us could ever have expected.

After the reassignment of Picard, Worf and Doctor Crusher, the Enterprise Crew must get used to a new command under Captain Edward Jellico.  His brash demeanor and strict nature is something Riker and the remaining crew immediately begin have difficulty with but must find a way to overcome in order to complete their mission.

Admiral Nechayev arrives on the Enterprise and, much to Picard’s surprise, relieves him of command of his ship.  Afterward, she briefs Riker and the rest of the crew that the Cardassians have begun an incursion into Federation territory.  Picard, Crusher and Worf have been reassigned and the Enterprise will now be commanded by Captain Edward Jellico.     Riker, of course, questions her decisions but he is rebuffed.  He will not have command of this ship.

We find Picard, Crusher and Worf training on a holodeck for a clandestine mission.  They are clearly in a black-ops situation and  they need serious training time.

Jellico arrives and immediately begins making changes to the operation of his new ship.  Later that evening, Picard hands over command to Jellico in a special ceremony in Ten-Forward.  Picard and Jellico discuss the situation, the Enterprise is approaching the Neutral Zone and things are going to get interesting.   Jellico and Riker have a brief confrontation about shift changes and it is clear they are not going to get along.

Jellico launches into some serious changes throughout the ship and, using Data for backup, he tours the ship enforcing major adjustments to the departments and pushing his weight around.   Deanna visits him and attempts to discuss with him the challenges that the ship is facing under Jellico’s command. She asks for time for the crew to get used to Jellico’s command and he commands her to not only ‘fix’ the morale issue but also for her to begin wearing her proper uniform while on duty.

Picard and Jellico discuss the upcoming mission.  Jellico isn’t impressed with the Enterprise or it’s crew and informs Picard that ‘the Enterprise isn’t his now’ and so Picard needs to focus on his own mission.   Picard, Crusher and Worf depart, Picard begins to fill in his team about their mission.    It is believed that the Cardassians are making a terrible viral weapon that will allow the Cardassians an easy victory over the Federation.  Picard and his team are to infiltrate the Cardassian facility and destroy the bio-toxins they encounter. 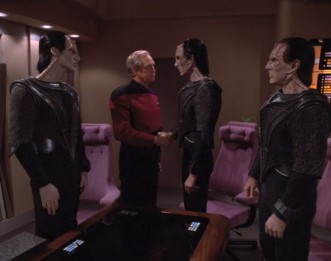 Jellico makes arrangements to meet with a Cardassian leader named Gul Lemec.  After keeping Lemec waiting for over an hour, Jellico arrives and challenges Lemec’s stance on the peace talks between the Federation and the Cardassians.  After storming out, Jellico explains his tactics with Troi and Riker.  Riker is impressed with Jellico’s confidence only for Troi to inform Riker that Jellico isn’t really that secure.

The Negotiations begin and Jellico keeps up his ‘tough guy’ persona.  Gul Lemec informs Jellico that they are aware of the small Federation team is on a mission to infiltrate a secure Cardassian location.  Lemec even drops Picard’s name making them all realize that the clandestine mission has been compromised. 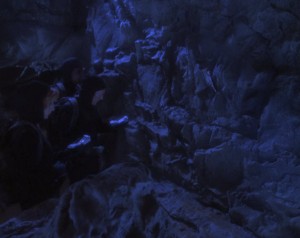 After acquiring transport to the Cardassian planet, Picard and his team work their way to their target.   Facing chasms and rock slides, the team make it to the secret facility.  They make it in only to discover that their entire mission was a trap.  The Team manages to escape with Picard left behind to be captured by the Cardassian military.

Meanwhile on the Enterprise, it has become clear that the Cardassians set a trap for Picard and his team.  They see that the emissions they were concerned with have stopped indicating that either the team succeeded or it was all for nothing.

Picard is brought before a mysterious Cardassian officer who seems to know a considerable amount of information about Jean Luc.   It appears that this entire trap was set to capture Picard himself and now, they have him in their clutches.

Now, imagine for a moment that THIS was the finale of Season 5.   This would have been the most insane and intense ending to a season ever.  Not only would the Captain of the Enterprise be facing certain death but the Enterprise herself would be under the command of a new Captain, one the crew doesn’t even like!    I mean, all that does in fact happen but imagine it being the end season cliffhanger.  Instead we got a fairly weak time travel story,  Not a bad one, but not season finale material compared to Chain of Command.

Overall this is a great first part of a two hour story.  For the first time since The Battle of Wolf 359 have we feared for Picard’s safety.  Not only did Picard get captured but it looks like he has been replaced on his own ship by a total tool.

First impressions of Jellico are not good.  The man doesn’t take a second to assess the ship, he just goes in making assumptions and demands.  While well within his rights, he falls into one of the biggest management no-no’s ever.  We have all been in a situation where we get a new boss and immediately do not like them.   Many of them come in with preconceived notions on how things should run without even taking a moment to learn how they do.  Many times they clash with existing staff and tend to disrupt the status quo of the location they are managing.

A wise manager will pull together the leaders of a location and discuss with them the changes, if any, that are needed.  They will, of course have their expectation that the team will run as well or similar to their previous team, this is common for experienced management but they should recognize that this is the same feelings their new team will have as well.

Here is a great article for management that really boils down the things that solid managers try to do when talking over a new team.  Maybe Jellico should have done some research…

Overall, this was a great episode,  but just wait…part two gets better.

This is pretty much the start to the events that would lead to series Deep Space Nine.  The Cardassians pulling out of Bajor, their new militaristic stance and of course, the Federation being involved. 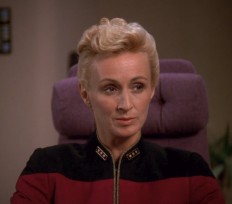 The Unnamed Cardassian at the end is played by the great David Warner.  This isn’t Warner’s first time on Star Trek though, he also appeared in Star Trek V The Final Frontier as well as Star Trek VI the Undiscovered Country.

This is the first time we meet Admiral Nechayev and she will certainly return.

Thanks for reading the Retro TV Review,  I look forward to discussing the rest of the series with you, one episode at a time every Monday, Wednesday and Friday!  Next Review: Chain of Command Part II