Q returns to Voyager with a request.  Originally broadcast on November 27, 1996, this is The Q and the Grey.

Janeway is asked to be the mother of Q’s child in order to end a civil war caused by events Voyager helped set into place.

Witnessing a nearby Supernova with the crew, Captain Kathryn Janeway retires to her quarters and is shocked to find Q in her quarters with the proposal that Janeway be the mother of his child. Janeway refuses despite Q’s attempts at seduction and, over the next few days, she continues to ignore and reject his advances.

A Janeway continues to ignore him, Q goes to the crew for help, asking Paris and Harry for advice only to get the same response, each asking his true intentions. Not to be put aside, Q even asks Neelix for advice managing to get an honest answer that Janeway will only respond to someone who is Respectful, loyal and sincere.

Taking this advice to heart, Q tries again even presenting Janeway with a puppy. Still unimpressed, Q and Janeway are interrupted by a female Q. The Female Q (SQ) chides Q of his attempts to pollute the continuum with Janeway’s DNA.  Janeway realizes that these two might be a couple and asks them to take their disagreement elsewhere.

Moments later a nearby sun goes nova causing Janeway to rush away.  Soon the crew begin detecting multiple Novas and Voyager is in the path of several shockwaves.  Insisting that Q is responsible for the events threatening the ship, Janeway demands that he do something about it.  Q does but not what Janeway is expecting, transporting himself and the Captain into a recreation of the American Civil War leaving Voyager behind facing a dangerous shockwave.

Upon reaching the warzone, and now in period clothing, Q informs Janeway that due to their previous encounter with Quinn and his subsequent suicide, the Continuum is now at war. This Q Civil War is spilling over into the galaxy creating supernovae all over the place.  Q wishes to end the war by introducing a hybrid comprised of Q and Human DNA as it is something that has never been done before.  Just as he finishes explaining the situation, the house they are hiding in is riddled with bullets and Q his hit. Tending to his wounds, Janeway and Q hear a voice from the outside demanding his surrender.

Voyager finds itself off course and damaged by the shock waves.    With SQ on board, and slightly wounded herself, Chakotay demands answers.  SQ explains the situation and agrees to work with Voyager although she does not believe they will be able to do as she asks. Working with Torres, who she seems to admire, SQ grows impatient in how slow the crew are to implement her modifications to the ship.  With the modifications finally completed,  SQ asks Chakotay to fly Voyager directly into one of the Supernova in order to enter the Continuum.  Uncertain if it will work, Chakotay gives the order and they head in. 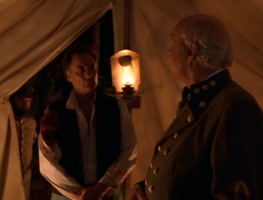 Q awakes in a medical tent in a allied camp with Janeway nearby.  Still interested in mating, Q brings it up only to have Janeway propose a new solution.  Q should mate with SQ.  Refusing to acknowledge this as a solution Q offers to send Voyager home but Janeway still refuses.  Janeway suggests offering a ceasefire and heads to the enemy camp to make the offer.  Unfortunately it doesn’t work and she and Q are soon ordered to be executed.

The next morning, just as they are about to be shot, the crew of Voyager arrive dressed in period clothing and route the enemy Q-soldiers saving both Q and Janeway.   SQ unties Q and Q soon proposes Janeway’s idea of having a ‘child of peace’ together.  Intrigued, she agrees and, after the Colonel-Q is captured and forced to bring the battle to a halt, Q and SQ ‘mate’ with the touch of their fingers.  Q returns them to their space, and the Voyager  crew find no sign of the ongoing war.

Back in the ready room, Janeway finds Q with his son.  Q asks that Janeway be his son’s God Mother and Janeway agrees. 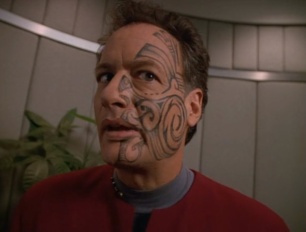 I adore Q-centric episodes.  If you have been following my reviews since the TNG episodes, this will not come as a surprise.  While many of them tend to be over the top or silly, the appearance of Q is, to me, such a great moment of levity that seems to reset the season allowing things to start fresh from that point on.  Almost a pallet cleanser, Q episodes are a nice pit stop before setting course for the remainder of the season.

This one in particular is a favorite of mine.  Not only do we get to see Q again, but we get a continuation of a past appearance, which really hasnt been done before, at least not to this level. Serving as a sequel to Death Wish, this episode shows that the warning Q gave about letting a member of the continuum commit suicide was not just an empty threat.  This singular event did in fact set off a devastating war that could have actually destroyed the universe.  Of course, it would be Q to show up and set things right…and we get freakin Suzy Plakson as a Q!  For those who are not in the know, Plakson has been a Star Trek regular for a while, since her appearance as Doctor Selar and K’Ehlayr on STNG, she has been one of the most popular guest stars on the series bringing a considerable depth to her characters.  While we never saw her on Deep Space Nine, it was a joy to see her make her first appearance sans makeup in this episode.  Frankly, I really wish she had come back for more.Heck, how great would it have been for her to terrorize Janeway thinking that her Q had a thing for the Captain? Sadly, it was never meant to be.

Overall, this is a fantastic and fun episode that really gives us more depth into the character of Q and the continuum itself.  I always love how DeLancie and Mulgrew have such a chemistry on screen and this one keeps up the pace.

Thanks for reading the Retro TV Review,  I look forward to discussing the rest of the series with you, one episode at a time every Monday, Wednesday and Friday!  Next Review: Macrocosm