What if the Maquis had taken over Voyager?  This and more is explored in the episode that originally aired on May 14, 1997.  This is Worst Case Scenario.

A holonovel is discovered depicting the Maquis taking over Voyager but no one is sure who made it and why it was made in the first place.

B’Elanna is confronted in a turbo-lift by Chakotay where he informs her that he is not happy with Tuvok nor the way Janeway is running things, despite the fact that he has seemingly acclimated over the past three years.  Before she departs the turbo-lift, Chakotay asks Torres which side she will be on when the shooting starts.

Arriving on the bridge, Torres takes her position and Janeway announces that she and Paris will be going on an away mission, leaving Chakotay in command.  Unable to get Tuvok assigned to the mission, the moment they leave, Chakotay stuns Tuvok and Kim launching a full takeover of the ship by the Maquis members.  Torres is even more shocked when she runs into Seska who joins their cause.  Pulling Neelix into their revolt, the group send the remaining senior officers to the brig and any other loyalists to an empty cargo bay.  With the ship under his control, Chakotay announces he will be dropping all Star Fleet loyal crew-members off on an inhabited planet and taking Voyager back to the Alpha Quadrant by any means necessary.

Just as things seem dire, Paris walks in revealing that everything that has transpired has been nothing but a holodeck program.  It seems that Torres stumbled across the program when doing some maintenance and is considering reporting her find to Janeway.  Talking her out of it so he can run it himself. 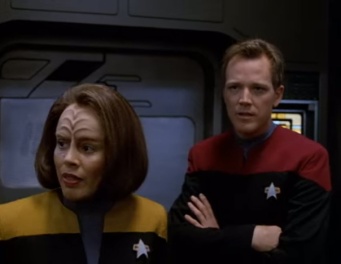 After Paris’ run-through, he and Torres discuss the program in the mess hall only to discover that several others on board are running the program as well.  Returning to the holodeck, Paris runs through it again but this time Janeway and the holo-Paris return to the ship where Paris has to confront himself….only nothing happens.  The program fails leaving Paris quite upset as it seems the simulation had never been completed.

During the next staff meeting, Janeway causally brings up the program indicating that thirty three different crew members have participated in this new obsession yet no one knows who made it and why.  Tuvok reveals that he created the program as a tactical exercise but soon realized that it was not necessary as the Maquis posed no real threat and such a program would likely only cause more animosity among the crew.  Unfinished, Tuvok asks to have the program permanently deleted but is shocked when Janeway asks that it is completed as it has shown to be an original form of entertainment that is much needed on the ship.

After confronting Paris in the mess hall, Tuvok and Paris head to the holodeck to begin work on Tuvok’s program.  Paris reluctantly agrees to work with the Vulcan Security Officer as the program is only able to be edited with Tuvok’s security codes.  No sooner do they begin editing it does the program begin to glitch, locking down the ships transporters and miscommunication systems.  Tuvok and Paris soon find themselves in a holographic Brig where they learn that Seska had altered the program as a trap for Tuvok and that they have to finish the program or they will die. 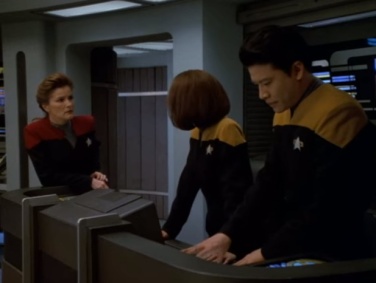 As Tuvok and Paris are fighting their way through the holodeck program, Janeway begins working on a way to get her crew-members out safely.  She soon learns that the system is booby-trapped by Seska but finds that she may be able to make small alterations assisting her crew-members without activating the traps.  Soon Tuvok and Paris realize that the real Janeway is assisting them and make their way to through the ship only to have Seska activate a self destruct that will kill Tuvok and Paris while also destroying the holodeck.  Tuvok is forced to give up his weapon to Seska but, when she tries to use it on them, the rifle malfunctions killing Seska in the process.  It seems that Tuvok had reprogrammed the rifle to malfunction knowing that they would likely be caught.  With Seska dead, the program comes to an end restoring the ship back to operational order.

Although their experience was less than desirable, the senior staff agree that such programs did provide a much needed distraction.  Tuvok suggests that his next effort will be something not based on Voyager. 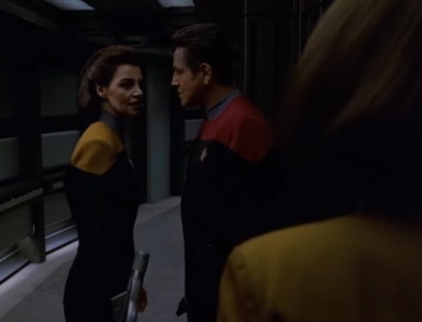 This episode is certainly a fun one giving us a glimpse into a possible alternate Voyager that could have been.  I particularly like the subtle bait and switch in how this episode opened, seeming to be taking place in the current timeline, insinuating that Chakotay has been planning a coup since the very beginning. The thing is, if you were paying attention from the start there are small things that don’t add up, such as Torres as an Ensign, showing the eagle eyed viewers that this is not reality, or rather, not the reality that we have gotten used to. It is only when Seska shows up that it is abundantly obvious that this is not taking place in the current timeline but…somewhere or some-when else.

What I love about this episode is that it give Seska one last attack on the ship even though she died in Kazon space sometime before.  It seems that the legacy of this Cardassian Agent is one that sticks around and, while she is not back in person, she is certainly one that would do something like this, planning for the chance to take down anyone in her way.

I do enjoy a good Holodeck malfunction episode and this one manages to do something unique using the rather convenient plot device. With only one episode left in this season, this episode marks somewhat of a last for many aspects of the crew and can be seen as a marker of what was before things get really intense.  Trust me, the season finale changes things in a way that no one could have expected. Plus, It also gives us a great insight into Tuvok’s training methods and his use of the holodeck to train his personnel.  It makes me wonder what other programs Tuvok has hidden in the ships systems.

Thanks for reading the Retro TV Review,  I look forward to discussing the rest of the series with you, one episode at a time every Monday, Wednesday and Friday!  Next Review: Season Three Finale: Scorpion