Q arrives on DS9 on one of his more memorable episodes.  Originally airing on February 7,1993, this is Q-Less.

Vash unexpectedly returns from the Gamma Quadrant but brings along an old friend who might be the cause of the growing issues that threaten the Station. 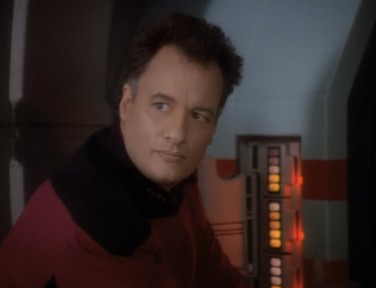 Doctor Bashir regales a young Bajoran girl with one of his most difficult adventures (it was a Starfleet medical exam) when He and O’Brien are called to help rescue Dax and crew on the Runabout Ganges.  After breaking into the shuttle, O’Brien and Sisko find Dax, Vash and the team safe but the question is, how did Vash get to the Gamma Quadrant in the first place.  We quickly learn, Q is on board the station.

After submitting herself to a full medical evaluation, Vash locks away artifacts in the stations assay office including a particularly special glowing gem.  Afterwards, Vash returns to her quarters where she runs into Q.  With Vash clearly upset at him, Q tries to get her to tag along with him on another adventure.  Despite his plea, she rejects him and tells him to leave her alone.  Just as Q is leaving, Quark arrives with a proposal for Vash which could turn them a tidy profit. She negotiates with him using a little Oo-mox, working out an amicable arrangement. Just as Quark leaves, none other that Julian Bashir arrives to ask Vash out for a date.  Needless to say, she accepts much to Q’s disappointment.

Q arrives at the replimat as a Bajoran and convinces Bashir that he is too tired for a date with Vash.  Just as they part ways, O’Brien sees Q and realizes what could be causing all of the problems. Immediately he alerts Sisko about the situation just as the station begins acting up again. 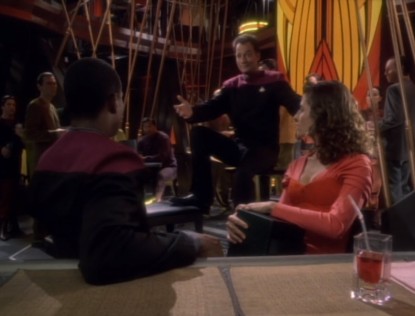 Vash begins to work with Quark on a possible auction for the Gamma Quadrant treasures when Sisko interrupts and asks about Q.  As if summoned, Q appears and begins to engage Sisko. Sisko insists that the power outages end but Q indicates that it is not him causing the issues.  Q sees a chance for a challenge with Sisko and they soon find themselves in a boxing match.  Sisko wastes no time and surprises Q with a punch that lands the omnipotent being on the floor. Q is pleased with how easy Sisko is to provoke. 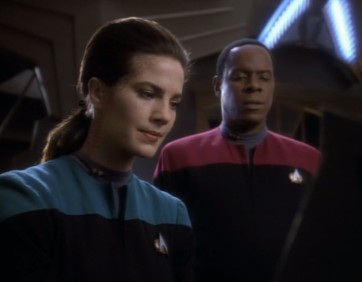 Soon the station begins having more issues including a hull breach.  Dax notices that a graviton pulse is detected every time there is an issue.  Sisko isn’t convinced that Q is to blame for this and begins to work to discover the cause of the imminent threats. Dax soon finds a way to track the source of the power outages.  Although Q continues to provoke them, they continue to work towards solution.  Just as the Auction is about to begin, the Station begins to move toward the wormhole at an increased rate.  Desperate to stop the Station before it hits the wormhole, they begin their desperate search for the cause.  Using tritium gas, they soon find that the source of the threat is located in the most unlikely of places, Quarks Bar. 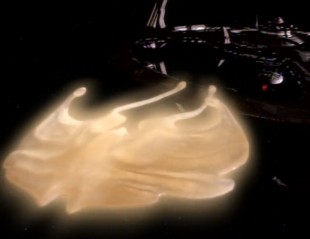 Dax and the team soon find Quark auctioning off a glowing gem with Vash and, as they bids get higher and higher, they soon find that the cause of the disruptions is the Gem Itself.   Despite Quarks protests, for fear of losing an immense fortune, Sisko beams the Gem out into space where it hatches into a space borne being.  The being flies into the Wormhole leaving the station behind.

With the threat behind them, Vash plans to take Sisko up on his offer and visit the Daystrom Institute on Earth.   Just before she leaves, Q arrives and tries to convince her to change her mind.   At the last moment, she decides to head to Tataras V and continue her adventures. 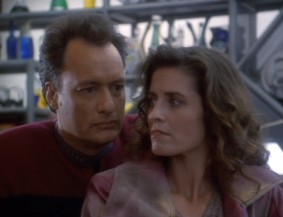 Serving as a sequel of sorts to the STNG Episode Q-Pid,  This episode is the one and only appearance of Q on Deep Space 9 as well as the final time we see Vash.   The thing that sets this one apart from every other Q-centric episode is that, Q really wasn’t responsible for any of their troubles, unless you count Vash returning with a dangerous object.  For the first time it really seems that Q is only interested in one person (other than Picard) and that person is Vash.

In many ways, Q’s attempt to give Picard a chance at love with Vash backfired and made Q himself find a certain joy in Vash’s company.  For lack of a better term, and if Q’s were capable of such a thing, you could almost say that Q was in love with the adventurous archaeologist. 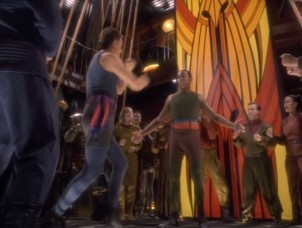 While we don’t get to see Q again on this series, we do get to have a great confrontation between Sisko and the Omnipotent Being.   This altercation really establishes that Sisko is nothing like what we are used to in a Commanding officer, instead of a cool, calculated Captain, we have a man who is passionate and lets his emotions drive him.  He is volatile but in a way that he will get what he wants through any means necessary as long as those means are for the greater good. In the single moment where Sisko punches Q, Q makes the comment that Picard never hit him.  Sisko eloquently responds with ‘I’m Not Picard’ firmly establishing this new Commander as his own character.  From this point on, there is no going back.

Story wise, it was a fun ‘threat of the week’ event but, even with that, this being the 6th episode of the series so far, it was a better episode than much of Season 2 of STNG.   If you remember,  that season was a rough one.

I remember being so excited that Q was making an appearance on Deep Space 9.  John De Lancie had become one of my favorite actors and Q one of my favorite foils.   Every season from there on out I hoped for more of this awesome character and, outside of STNG, we won’t see Q again until Star Trek Voyager.

This marks the first time we will hear the story of Bashir mistaking a Pre-ganglionic fiber with a post-ganglionic nerve.  It will not be the last.

There was a great moment acknowledging the difference between O’Brien’s position aboard the Enterprise vs Deep Space 9 when Q looks at him and asks ‘Weren’t you one of the little people?’ 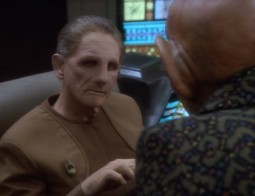 There is also a great moment between Quark and Odo before the Auction which continues to establish their relationship.   Odo doesn’t understand accumulating items and junk only to die and start the circle of greed over again.  Quark tries to figure out what Odo could possibly desire and, when Quark mentions getting Odo a latinum-plated bucket for the shapeshifter to sleep in, we see a moment where Odo and Quark make a connection.  It is a short moment, but it’s there.

Thanks for reading the Retro TV Review,  I look forward to discussing the rest of the series with you, one episode at a time every Monday, Wednesday and Friday!  Next Review: Dax