How do you choose between friends and duty?  When is the right thing to do not the RIGHT thing to do?   These conundrums are explored in the episode that originally aired on May 1, 1994.   This is The Maquis Part II.

And now the conclusion…

Sisko must rescue Gul Dukat and stop the Maquis from starting a war with the Cardassians but first, he and his team must escape from one of his oldest friends.

Ben Sisko and team find themselves captured by The Maquis and Ben’s old friend Commander Hudson.  Hudson explains that there is no protection for the colonists and that the Federation treaty means nothing to those under Cardassian rule.  Sisko warns his old friend that should Hudson continue his path, Hudson will face imprisonment from the Federation.  Unable to convince Hudson, Sisko and his team are stunned to allow the Maquis time to escape.

Returning to the station, Sisko and his team meet with Admiral Nechayev  who informs him that the Maquis are nothing more than a bunch of irresponsible hot heads who should have never been allowed to stay in Cardassian space.  She orders Sisko to find the Maquis and fix the problem as she considers them Federation citizens. Furious, Sisko makes it clear that Starfleet is too far removed from the realities of space as it is based on Earth which is now a paradise. As he says, it is easy to be a saint in paradise.

Odo informs Sisko that Quark has been in cahoots with Sakonna, the Vulcan Maquis member.  Quark admits that he has been involved in a business arrangement with the Maquis via Sakonna without knowing he was dealing with them.  After revealing the contents of the transaction, Quark is left in holding ‘forever’.

Sisko is soon visited by Legate Parn who claims that Dukat has been part of a small group of officers who have been supplying weapons to the Cardassian colonists and is partially responsible for this situation.  It appears that the Cardassian Central Command wants Dukat dead and Sisko takes it as a reason to go save Dukat as he is a valuable asset. 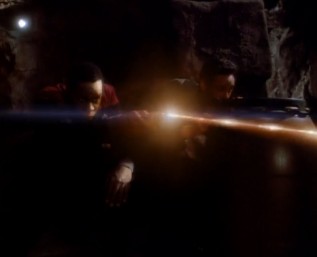 We find Sakonna attempting a Vulcan mind meld with Dukat only to discover that she can not make a link with the Cardassian.  It appears that Dukat has the fortitude to resist this sort of interrogation and this frustrates the Maquis members.  Soon, Sisko arrives to rescue Dukat only for a firefight to erupt.  After defeating the Maquis members, Sisko sends one of them with a message to Hudson,  Sisko wants to talk and he believes things can be made right again.

Upon returning to the Station, Sisko informs Dukat that the Cardassian government have laid the blame at Dukat’s feet and now he may be facing a trial of his own. After learning this, Dukat volunteers to assist in proving that the Central Command is involved with the weapons smuggling as long as Sisko helps him stop the Maquis.

After obtaining a full list of weapons Sakonna bought from Quark, they find a Xepolite freighter who refuses to answer their hails.  O’Brien fires a warning shot and soon comes into contact with the captain who claims to be carrying wheat husks.  Gul Dukat threatens the ships Captain telling the man he will destroy their ship unless he cooperates with them.  The Captain reluctantly agrees and they are able to confiscate the weapons being smuggled.

Back on the station, Quark discusses the situation with his fellow prisoner Sakonna.  He explains that they are at a point where the price of peace is at an all time low where every party could easily talk out the situation and bring about peace.  She soon begins to give up her information as it is the only logical thing to do.

Sisko informs Dukat that he has discovered that the Maquis plan to attack a civilian outpost they believe has a weapons depot.  Dukat denies the existence of the depot but Sisko believes it is still a target.  Sisko travels to a colony and leaves a message for the Maquis.  If you make yourself an enemy of Cardassia, you make yourself an enemy of the Federation, should they continue with their attack on the weapons depot, they will find themselves in a bad situation.  Hudson arrives and tells Sisko that it is too late to reach a peaceful agreement with the Cardassians.  Sisko tells his old friend that should Hudson attack, he will have to go through Sisko to accomplish their goal.

Facing the possibility of a full scale war, Sisko and his team must find a way to prevent the Maquis attack.  They soon launch the runabouts in order to stop the Maquis and before long come face to face with the Maquis Raiders.  Sisko soon finds that he has no choice but to attack his old friend and it soon becomes clear that Hudson will stop at nothing to succeed.  They soon come to a stalemate and, much to Dukat’s dismay, Sisko allows his friend to escape rather than kill him.

In the end, the peace is preserved…for now. 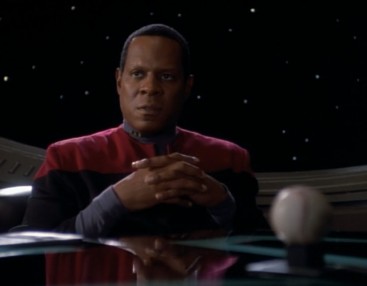 We finally get another story that really focuses on Ben Sisko and who he is as a Starfleet Commander. Although the rest of the cast is interesting, it seems these past couple seasons have really not allowed Ben Sisko to evolve much and certainly hasn’t given his character much to do beyond ‘being in Command’. Unlike Picard, we really know little of his past, who he is as a person or even seen much of any personal connection with his crew.  Sisko plays his cards very tightly to his chest making him somewhat aloof as the Commander of the Station.   This one, however, is personal for Ben as this tie his enemy is also one of his oldest friends, one Calvin Hudson.  Sisko must face the pull between duty and friendship as, while he can sympathize with the Maquis, he knows that they are in the wrong by their methods. Despite this, he does everything he can to give Hudson a chance for redemption, even neglecting to tell Star Fleet of his friends defection.  To make it even harder, it seemed that Sisko genuinely felt responsible for the Colonists even though they had been given up on by the Federation when the Cardassians regained that sector of space.  In many ways, they were doing just what they were told to do, defend themselves.

In the end, letting Calvin go was the one thing he could do to keep the hope alive that his friend would find his way.  Sadly, this would be the last time he would see Commander Hudson, as he would die shortly after these events.   Avery Brooks does a tremendous job with the personal struggle of dealing with his duty versus his friendship, something that is never easy and is seldom simple. 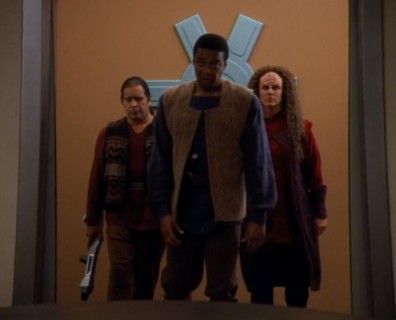 Something thing kept running through my mind though, What is it with Federation officers going rogue?   I mean, as far back as the TOS episode The Doomsday Machine with Commodore Decker, there have been a ton of officers who just go rogue from Starfleet.  More recently, in addition to Hudson, we had Admiral Pressman, Lt Ro, Captain Maxwell, Vice Admiral Dougherty and many more to come.  I mean, if we had that many rogue officers in the military we would be boned! This, aligned with officers ‘resigning their commissions’ at the drop of a hat, shows me that Star Fleet really has an issue with control over their people.  You would think that Starfleet would have some serious physiological profiling going on to help prevent this but I guess not.

Sisko brings up a point that has never really been explored until now that probably explains my question above.  We all know that by the time of the series,  Humanity has reached a level of peace and prosperity previously unheard of. In this new future, the pursuit of wealth and personal gain has been supplanted with the pursuit of cultural growth and development.  While Earth, and possibly the neighboring worlds are at a state of Paradise, there are those who have to go out and explore, unable to participate in this Eden that has been formed.  Sure, they get some of the benefits like replicators and technology, but suffering and hardship are part of their every day lives, unlike those still on Earth.   With the Federation and Starfleet based on Earth itself, the decisions they are making are very much in a vacuum with many of the leaders being civilians who probably have never left the safety of the planet.

This being said, those that have been in the far reaches of space, those that are seeing these atrocities for the first time, are likely overwhelmed with how separated the Federation has become with it’s non-Earth based citizenry.  In fact, they begin to see the flaws in the Federation as it becomes easy to dismiss hardships when you have none of your own.  We get to witness some of this first hand further in the series but not to the extent it could have been explored.

We learn that Cardassian trials are predetermined and the actual trial is more of a show.  There is no chance for an innocent to be condemned as Cardassians never make mistakes.

3rd rule: Never spend more for an acquisition than you have to.

Thanks for reading the Retro TV Review,  I look forward to discussing the rest of the series with you, one episode at a time every Monday, Wednesday and Friday!  Next Review: The Wire