Star Trek is no stranger to Socio Political commentary but many times, like our Season One Don’t Do Drugs Episode, they can be a little heavy handed in their delivery.  This one is unique in it is not very obvious from the start and manages to tell a good story the whole time. Originally aired on January 8,1990, this is The Hunted.

A New planet has applied for membership into the Federation and the Enterprise is dispatched to investigate.   While there, they discover a horrible secret about how the inhabitants of the planet treat their veterans.

Picard and Riker are visiting the Angosians and are impressed with how quickly the planet has recovered from their recent wars.  The Prime Minister indicates that the Angosians have focused on Arts and Intellectual achievements as they now consider violence an abhorrence.  While there, a prisoner escapes and, as the Enterprise tries to assist, the Prisoner manages to continue to outmaneuver them in a small vessel.   The Enterprise manages to subdue him and beam the prisoner aboard.

Upon beaming him aboard, the prisoner attacks the crew and manages to take down several officers until Riker and Worf subdue him.   He is taken to a security cell where they discover that he can not be detected by the ships sensors.  Meanwhile, Deanna Troi is passing by and detects the Prisoner is having nightmares. She begins to talk to him and suspects that there is more to him than he lets on and the Angosians claim. After discovering that he is not a criminal but a former soldier instead, she soon finds out that his people incarcerated him because, once the war was over, he was too dangerous to remain as part of the society. She learns that he has been programed and enhanced with new abilities to become a better killer.  The scientists who did it, can not (or will not) undo the programing.  Upon hearing her report, Picard is concerned over the situation and begins an investigation.   He contacts The Prime Minister and questions the situation, however gets nowhere.

Danar rallies his fellow veterans and launches an attack on the planet.   Picard takes an away team down to help prevent the possible massacre as these Veteran Prisoners have been made to fight by the very people that have shunned them. 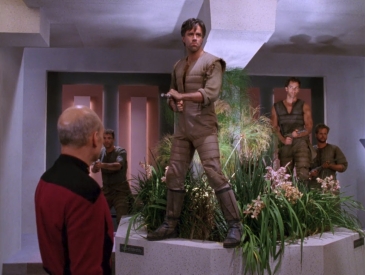 It is a solid entry into the series.  While it doesn’t really have much in the line of character development, it does do a little world building with the viewers meeting a Federation candidate.  With that you get a look into some of the process it takes to become a member.  The Angosians were rejected due to their unstable system with handling it’s citizens.  This indicates that a planet must be able to manage it’s citizens in a peaceful and fair way before even being considered for membership.

This episode is also one that has a very strong socio-political message concerning veteran affairs.  Most of the finest episodes of any of the Star Trek series take opportunities to discuss major issues of the time.   When the series originally aired, trouble in the middle east had been brewing and many veterans who came back had problems getting treatment from problems they encountered.  During the Vietnam era this was even more prevalent when soldiers came back to hatred and abuse from the very people they were fighting for.  Other movies such as Rambo have used this as a plot element but few manage to do so without being heavy handed in their delivery.  This episode really manages to pull it off without being preachy and manages to tell a good story to boot.

James Cromwell plays the Prime Minister and (in addition to a few more roles on TNG and DS9) will later return to work with the Next Generation crew as Zephram Cochran in the film Star Trek First Contact!

O’Brien gets to make use of his old days in Enterprise security as the Prisoner tries to escape after being beamed aboard.  O’Brien doesn’t get very far, it looks like transporters are his thing.

There is a great little moment between Riker and Worf where Riker tells Worf that Worf is responsible for The Captains safety while on the planet.  This is a great pick up of Riker’s continued insistence that Picard NOT go on away missions as he is too vital to the ship.

Danar is played by Jeff McCarthy who will later play the Chief Medical Officer on Star Trek Voyager.  Sadly he doesn’t make it through the first episode alive…

Thanks for reading the Retro TV Review,  I look forward to discussing the rest of the series with you, one episode at a time every Monday, Wednesday and Friday!  Next Review: The High Ground