When I was a kid I watched a lot of movies, heck I still do, but as a kid television and movies were a major part of my life. They were an escape from my life. My childhood wasn’t great, in fact like many of us, it was downright miserable at times. Movies and television allowed me to escape that. It allowed me to go places outside of my reality. Books, music and Video Games would later end up in that mix but that’s not what this is about. This is about film and the key movies that stand out in my life.

Well before the insane onslaught of comic book movies we currently enjoy, these films were a rare treat in a sea of pretty much every other genre known to man. However, after the massive success of the Superman films and the 1989 Batman, it became popular to adapt old pulp comic heroes into feature length films as producers were desperate to recreate the magic those films had captured. Starting with The Shadow and The Rocketeer this move to pulp heroes was a risky one as those films did not see the success expected, however there was one other on it’s way that could change that trend, of course I speak of, The Phantom.

Based on the classic comic strip of the same name, The Phantom stars Billy Zane as the title character. After learning that a criminal genius has plans to use a set of sacred sculls to take over the world, The Phantom journeys to New York to put an end to his treachery. Directed by Simon Wincer and starring Billy Zane, Treat Williams, Kristy Swanson, James Remar and Catherine Zeta Jones, this is a supernatural superhero adventure like no other.

Even as a kid, I loved superhero films. It did not matter how obscure or unknown they were, if there was a character with superpowers of some sort fighting crime, I was there. Having already watched and loved pretty much every superhero film that had been released, I was enthralled with the idea of a new franchise starring the pulp classic character.

Having already been introduced to the character in the mid 80’s from the animated series Defenders of the Earth, I was excited at the prospect of this film leading to a full line of films starring the Phantom and other characters from this universe. Keep in mind, this was well before the idea of a shared universe was even considered in films so for the prospect that characters like Mandrake the Magician and Flash Gordon in a connected series was exciting. Sure we had Batman and Superman, but the thought that we could have even more was riveting! That and, I was a teenage geek who ate up pretty much anything like this so, of course I was on board!

I remember going to the theater to see this one. It was either one of my several ill fated dates or just me taking my little sister to the movies, which is something I started doing around the release of Jurassic Park in ’93, but nevertheless I went and this film has remained one that has held a spot in my heart ever since. While I dug it (because of course I did), most people

While this is nowhere near the production level of the current superhero films, for the 90’s this was a pretty solid entry. Somehow, however, it failed to capture the imaginations of movie goers so we never got the larger universe of the Defenders of the Universe I had expected.

Why it failed? Who knows. Maybe it was a matter of being too soon or because it was up against films like The Rock and Independence Day, but this film was pretty much DOA the moment it was released. That being said watching it again for this review I could see some flaws that I had missed earlier in life that probably added to it’s unfortunate failure.

One of the biggest problems is how Billy Zane portrays the lead role of The Phantom. Somehow he manages to not quite fit with the film about his own character which is strange to say the least. The film itself is played out to be a high adventure ala Indiana Jones or The Mummy but with a superhero in the role of the unstoppable adventurer. Unfortunately Zane comes off almost too much like a 40’s pulp comic character in a film that is very much a product of the 90’s. When I first saw the film I felt it fit the character perfectly but later in life I realized that this odd blend of worlds just doesn’t seem to work. Sure he has the look and the swagger, I mean he looks great in the mask, but he is far too much the grinning ‘good guy’ to be a convincing super hero.

Think of it this way. Imagine taking Adam Wests Batman and inserting that version of the character in a modern Justice League film where everyone else felt more modern. That is what happens in this film and, frankly, it really distracts you from the story at times. Seriously, every time you see him he has this goofy grin on his face like he can’t get over the fact that he is playing a superhero. I mean, honestly the purple suit is pretty silly too, there is a reason why the Bat suit was updated in every film so far, but we could ignore that if everything else worked well. All that being said, Zane is utterly convincing as his alter ego Kit Walker, even though this movie isn’t about him, giving him half of a solid character performance. 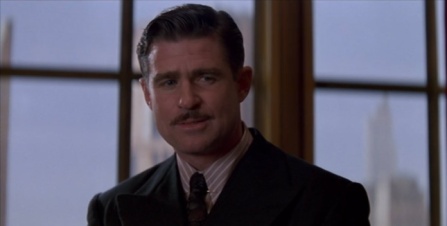 Even though Billy Zane was not quite the Phantom we had hoped for, the rest of the cast were pretty stellar. Seriously, this film has Catherine Zeta Jones, Treat Williams, Kristy Swanson and James Remar in it, those folks pretty much excel at everything they do! This movie is certainly no exception. With Jones, Remar and Treat playing the Phantom’s foils and Swanson as his rather non-traditional damsel/love interest, the supporting cast to Zane are pretty much perfect. I particularly like Williams portrayal of the criminal mastermind Drax. There is no doubt that he is in charge and ready to take over the city making him a pretty great Lex Luthor to Zane’s Phantom. While he is great, it is a sad state of affairs when the villains outshine the heroes but such a thing happens.

Everything else in the film is great, from the special effects to the film score by David Newman. (You know his work from Galaxy Quest, Serenity and many other fantastic films). Honestly, this is an extremely well produced film that should have done far better than it did, thankfully it has gained a bit of a cult following in the preceding years giving The Phantom a much needed fanbase.

Overall, The Phantom is a mixed bag of a Superhero film. It is a good example of how a miscast lead can bring a perfectly good film down around him. Don’t get me wrong, I love Billy Zane but purple was not his color.

If you want to check out this film still, you can pick up a copy fairly cheaply these days. You can grab a copy here for about $6 and, despite it’s flaws, it is certainly worth that much. I really hope they can bring back the Phantom before this superhero trend slows down, I mean, now is certainly the time to do it right?