We are officially halfway through the series. Hard to believe huh? Only 88 more to go…

How does the Federation go about meeting new life and new civilizations when the Prime Directive explicitly states that they shouldn’t if they are pre-warp.  Maybe something like this.   Originally aired on February 18, 1991, this is First Contact.

Riker is undercover in a culture who is on the verge of Warp capability when he is injured.  His Injury leads to his being discovered by the local populous and may lead to violating the Prime Directive and also, may cost Riker his very life. 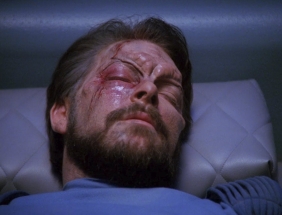 Riker is rushed into an emergency room after sustaining serious injuries.  While this would normally not be a bad thing, Riker as been undercover on an alien planet that is on the verge of discovering Warp Travel.  So, when they discover his…oddities, he they immediately suspect he is more than he claims to be.

After awakening, he informs the doctors that his odd appearances are due to a genetic abnormality that his Doctor (Crusher) is aware of it and he would rather see her.  After leaving, they reveal that they are indeed afraid that he may be an alien as their people have recently been exploring space and they realize that maybe others are among them.

Riker does everything he can to escape and soon gets the help of a nurse in the hospital that has some serious hots for him, well , for aliens.   Not surprising as he is Bearded Riker and man can that guy attract the ladies. Ultimately he is captured and further hurt.

Meanwhile we meet up with a group who are working on Warp Travel. It is clear that there is a concern about leaving their star system and that this will cause a schism in the native populace. The lead scientist, Mirasta Yale, is soon visited by Picard and Troi, where they tell her who they are and take her to their ship.  They explain that with them being so close to Warp Capability that they like to contact people prior to their exploring space.  Isn’t this a little bit of a loose interpretation of the Prime Directive?  I always thought that they waited until a species left their planets but apparently that is not always the case.  It turns out they initiated contact early because of Rikers disappearance.  Picard and crew are desperate and so they hedged the rules a bit. Mirasta agrees to assist but only if Picard agrees to keep the depth of their infiltration to a minimum. 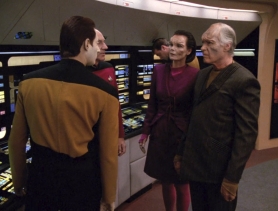 Mirasta introduces Picard to Chancellor Durken (who is a proponent of space travel) and they take him to the ship to talk with him about first contact.  Picard and Durken discuss the future of their potential partnership together.  They soon bond with one another and the Chancellor brings the Federation’s offer to his staff members.  Of course there are some who are afraid of the prospect and the Chancellor soon finds out about the Federation observers.

Krola, the biggest adversary to a first contact situation, takes advantage of the situation and insists that they interrogate Riker so they can question him.  The Doctor refuses to cooperate as Krola may end up killing Riker.  Krola gets another Doctor to complete the operation and begins to interrogate Riker. Krola shoots himself with Riker’s phaser making it appear that Riker killed him. He does this to force the Chancellor to distrust the Federation people.  It ends up failing as Crusher arrives in time to save both Riker and Krola.  Chancellor Durken realises what Krola was trying to do and comes to understand that his people are not ready for First Contact.  He decides to delay the Warp Program until a time when the Malcorians are ready to to meet others beyond their planet.  Until then, he requests that the Federation stay away. Picard reluctantly agrees. Miranda Kale requests that she be allowed to leave with Picard and his crew.  Yale’s request is granted and she is granted a place on board the ship. (for this episode at least).

This episode does a good job with explaining just how the Federation prepares to meet a new species.   Due to the tragic first meeting with the Klingons, instead of just walking up and saying hello, the Federation chooses to learn all they can about a people prior to their first meeting.  This allows them to best prepare how and when to make themselves known and, in doing so, helps prevent any misunderstandings.  Imagine if the Federation just sat outside the planet waiting for a warp ship to leave the atmosphere?   How frightening would that be?

This is one that parallels our own world in a way when it comes to the fear of First Contact only we are the Malcorians in this situation.  There is a conversation at the end when Picard asks Chancellor Durken how he will keep the first contact quiet and the Chancellor replies that there will be stories and fiction about a government conspiracy with a captured alien but over time those stories will fade.  This obviously makes me think about the Roswell incident in 1947.  So much was brought up by that one incident and still, we are no closer to learning the truth as to what really happened there.  Could there have been a botched First Contact of our own and could we have been placed in a similar situation where our governments made a deal to wait until later?  Who knows but as another like me once said, ‘I Want To Believe’.

Mirasta Yale gets her own quarters and is allowed to leave with the Enterprise…but we never see her again.  What the heck?  Seriously,  wasted opportunity there.

So, people who go undercover only make their faces look like the aliens they are visiting?  This seems like a major oversight.  Maybe this incident changes the protocol a bit.

We not only never hear from Yale again but we never encounter the Malcorians either, so we never find out if they were ever ready.

Riker is practically raped by the Malcorian nurse and, let’s be honest, she ended up in a tabloid later stating her kid is an alien love child.

Picard toasts with the bottle of wine that his brother gave him after the incident at Wolf 359.  That didn’t take long to bust out. Seems like Picard was just waiting for a moment to pop that bottle open!

Thanks for reading the Retro TV Review,  I look forward to discussing the rest of the series with you, one episode at a time every Monday, Wednesday and Friday!  Next Review: Galaxy’s Child