What kid hasn’t dreamed of being an adult?  It is something every child has desired at one time or another, to be a grown up, to make our own decisions, to be Big. 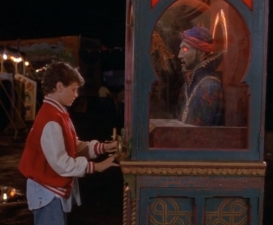 Big is about Josh Baskin,  a thirteen year old boy who just wishes to be ‘Big’, after making the wish at a Zoltar machine he finds his wish is granted and it isn’t all what it is cracked up to be.  Starring Tom Hanks, Elizabeth Perkins and Robert Loggia, this is a classic film that reminds you to be careful what you wish for.

I can’t say that I saw this in the theater but it was quite likely, we tended to see big films like this when they came out, but I know that we had a copy on VHS and this was one of those films that I have watched time and again, never getting tired of its innocence and fun.   When this came out I had already loved him in the film Splash and found him hilarious in The Money Pit so, when this movie came out, it was one that I had to see. Of course, at the time of its release, I was a kid myself and also wanted to be Big, so to see this wish happen through the eyes of one of my favorite actors was awesome.

This is one of those films that has so many memorable scenes that people remember them to this day.  One in particular is shown in our title banner and involves a giant piano at FAO Schwarz.  It is classic. 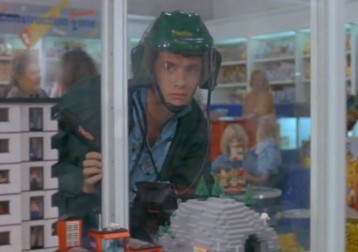 This is one that is an instant classic.  It is genuine, real and just plain fun.  Tom Hanks channels the youth and wonder of a kid in a man’s body.  His natural ability to capture that youthful innocence is brilliantly used in this movie and it makes it all the more  enjoyable.

During the course of the film Josh (Hanks) learns what it really means to be ‘big’.  He finds that he has a career, a love life, a future.  Before he realizes what is going on, the adolescent Josh is actually grown up and soon has to decide whether he is truly ready to be Big. Hanks does an amazing job in his role, Tom Hanks is one of those actors who just seems to nail each and every role he is in.  He has the ability to convince you that he is actually a pre-teen boy in one film and that his is a squad leader in World War II in the next. 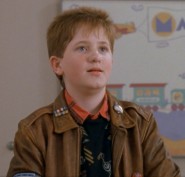 The supporting cast is wonderful as well, Josh’s best friend Billy (Jared Rushton) is the Josh’s constant reminder of who he really is and why he needs to go back to being a kid. Jared does a great job in the best friend role and really comes across as an actual kid, not just a kid actor acting like a kid.  Trust me, it makes a difference.   In addition to Billy, Elizabeth Perkins plays Susan who ends up in a romance with the adult version of Josh.  Over the course of the film they really have a great chemistry together and, although a little odd, it feels like they are a genuine couple. 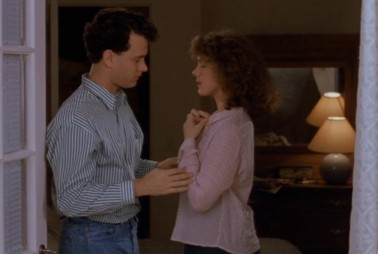 There is one thing about this film, however, that I didn’t think of much as a kid but now as an adult, the implications are pretty crazy.   As Josh grows up he and Susan (Perkins) find themselves in a real romantic relationship.  Of course he and Susan end up making love and having a real relationship.  I know that the scene is done to show that he is actually becoming an adult, even though he is really just thirteen,but as I said, the implications are crazy.  By the end of the film he ends up choosing to become a kid again with all of his experiences as an adult intact.  This has to really make for a very confusing time when he goes back to growing up again.  I mean, the mental trauma alone has would be significant right?   I know we are not supposed to think of this but let’s be honest, this kid is going to be messed up for ever. Not to mention the woman who had the relationship with him, she’ll probably be scarred for life as well.   I mean, she’ll probably never have a normal relationship again and the psychiatrist bills alone are going to bankrupt her.

How did this film translate into real life?

Like Josh wishing to be Big and discovering that he had to grow up, As I grew up I realized that I could still keep my youth even though I was getting older.  In time it became apparent that while we do have to get older, we never really have to truly grow up.  Sure there is responsibility and obligations, but when it comes down to it, what is the purpose of life if you don’t enjoy yourself?  Why do we strive to make others happy while plodding along in a miserable existence.   They say to live life in the fullest, me I say just enjoy as much of your life as you can, you only get the one.

You can find this one pretty much anywhere movies are sold.  I picked up a copy on Vudu so that I could re-watch it for this review and it only ran me around $5 at the time.   Typically it is no more than $10 and I have to say, it is worth every penny.

As normal,  here is the trailer

Thank you for reading today.  I hope you enjoyed the review. If you would like to read more reviews I have a weekly series called Key Movies Of My Life that comes out every Thursday and also a complete review of Star Trek Discovery.  We also have a fun Retro TV Review series in which we are currently reviewing the entire Star Trek The Next Generation Series, episode by episode.