Trust and duty come into play in the episode that originally aired on October 16, 1995.  This is Hippocratic Oath.

With the Dominion Threat in full swing, Bashir encounters a group of Jem’Hadar warriors and attempts to help them be free of the drug used by the Founders to control them.   As Julian and O’Brien deal with the violent warriors, Worf finds adjusting to life on a space station can be difficult.

Story A: The Cure 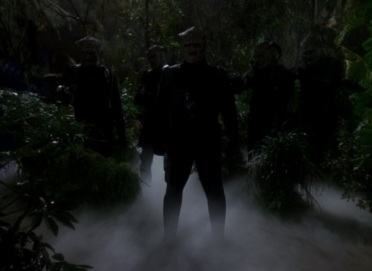 Bashir and O’Brien begin their trip home from a bio-survey in the Gamma Quadrant.  As they return they detect a strange signal from a nearby planet and go in to investigate.  Just when they begin their scan, their runabout is hit with an energy surge causing it to crash on the planet below.  After crashing, they find themselves surrounded by Jem’hadar warriors.

Taken prisoner, the duo are separated and Julian is forced to help the Jem’hadar leader, Goran’Agar find a way to free his men from their addiction from ketracel-white.   With their supplies of white running low, Goran’Agar is worried that his men will die should they not find a way to free them of their addiction.  He reveals that he, himself, is free of the drug and is desperate to find a way to do the same for his men. Bashir agrees to help as long as he has Chief O’Brien’s help to do so.

Working on the cure, and a way to escape, Goran’Agar discovers that O’Brien has built a weapon to free themselves.  In a tense moment it appears that O’Brien will be killed but he is freed by Goran’Agar so that they can continue to work on the cure.  With only three days remaining, things are not looking good.

Studying Goran’Agar, Julian finds that the Jem’Hadar leader is producing just enough Ketracel-White to keep him alive, but he can not tell how.  The Jem’Hadar leader indicates that, although they were raised to believe that the Founders are Gods, he has begun to have doubts.  This revelation excites Julian and the Doctor shares this with Miles who immediately believes this is nothing but a farce.  Julian insists that they help this group of Jem’Hadar get off of the drugs they are addicted to, hoping it will not only free these people, but cripple the army of the Founders. O’Brien insists that their duty is to escape and wants nothing to do with helping the Dominion warriors.  Ordered to help work on the project, O’Brien takes his opportunity to escape his captors despite Julian’s dedication to curing the Jem’Hadar’s addition.

With the Jem’Hadar in pursuit, O’Brien fights his way back the Doctor where he is shocked to learn that Julian has no plans to leave the planet.  Just as he begins to force the Doctor to leave, Goran’Agar appears and forces them back to their ship where Goran’Agar kills his second officer.  The Jem’Hadar warrior frees the Federation officers knowing that they do not have time to save his soldiers from a terrible fate.

Worf finds himself in Quark’s bar where he identifies a wanted man at the bar.  Informing Kira of his discovery, she explains to Worf that Odo has things under control.  Taking the matter to Sisko, the Captain explains that Odo is quite successful despite how he does things differently.  Worf is reminded of his position on board the station and promises to keep busy focusing on his own job.

After a briefing about the Klingon invasion of Cardassia, Worf presents Odo with vital information regarding Quark and a smuggler as to which Odo thanks him for the information but is annoyed when Odo indicates he will not arrest the Ferengi anytime soon.

Worf, upset at Odo’s apparent inaction, tales matters into his own hands and sneaks into Quarks bar in order to catch the bartender in the act.  Soon, the Klingon observes an illegal exchange and rushes to inform Odo of the bartender’s actions. Accusing the Constable of his inadequacy in his duty, Worf storms out of the security office clearly upset.

Quark continues his deal with the smuggler and is interrupted by Worf who is surprised to find that Odo has been on the case the entire time.  Odo, disguised as a bag, appears and informs Worf that he had planned on using this smuggler to take down the entire operation but the Klingon ruined his chances to do so.

Worf reports the events to Captain Sisko who tells his Klingon Officer that he already knows.  He learns that DS9 has far more shades of gray than any Federation starship.  Sisko believes that Worf will fit in, he just needs to give it some time.

At it’s core this episode is all about perspective.  Two vastly different stories but each one told showing how one perspective can dictate a different path than another, sometimes in extreme ways.

Much like when Picard had a chance to infect the Borg with a drone named Hugh, Julian has the opportunity to find a cure for a species that currently poses a major threat to the Federation.  As his oath dictates, Looking past their status as an enemy the Doctor does all he can to help them even if it means that they will only end up killing him and O’Brien in the end. On the other hand, O’Brien is a seasoned veteran and, due to this experience, he has the compulsion to find a way to escape, no matter what.  It is this compulsion that not only causes him to disobey Julian’s orders to remain and help, but also to destroy the work Julian was doing preventing the Doctor from ever finding a cure for what is essentially a warrior-slave species.  We will never know how close he was to a cure or even if Goran’Agar would have prevented their deaths at the hands of the Jem’hadar warriors as they went through withdrawal.

On DS9, Worf is feeling his own withdrawal from his security post aboard The Enterprise.  Knowing that he can prevent a crime from occurring, the Klingon can not see that the Constable has things under control, nor can Worf accept the fact.  It is only when Worf acts on his own that he gains a new perspective and an understanding that it is no longer his duty to be a Security Officer as Sisko has a great person already in place.  As with most people who change jobs, it is difficult to see someone else doing something you once did as you tend to judge their every move, even if those moves are the correct one’s. While this seems like a misstep that will prevent Odo and Worf from ever seeing eye to eye, this is only the first step in a mutual respect for each of their own individual abilities.

Thanks for reading the Retro TV Review,  I look forward to discussing the rest of the series with you, one episode at a time every Monday, Wednesday and Friday!  Next Review: Indiscretion