The return of a fan favorite after being gone for an entire season, Q comes back to the series when he must determine the fate of a young woman.   Originally airing on October 26,1992, this is True Q.

The Enterprise takes on an intern who turns out to be someone very special who attracts a certain old friend of Picard’s to the ship.

Picard welcomes a new intern, Amanda Rogers, to the ship. Soon Amanda begins working with Doctor Crusher calibrating equipment on their way to a relief effort.  There Amanda indicates that she is in fact an orphan who was adopted at a young age.  Later, she goes down to the shuttle-bay to work with Geordi where she, once again, uses her powers.  This time she secretly prevents a container from falling on Riker. As she continues her tour with Geordi they find themselves in Engineering where suddenly the Engine begins to overload.  Just as it explodes, Amanda puts her hands out and pushes back the explosion, saving the ship.  However, Geordi, Data and all of Engineering witnesses her abilities. 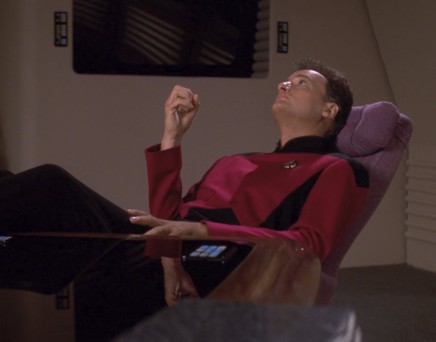 As the senior staff discuss the event, they are visited by none other than Q himself.   He tells them that Amanda is indeed a member of the Q continuum but does not know her lineage. Her parents were also Q who had rejected their powers.  Q has been sent to the Enterprise to evaluate Amanda and determine if she is eligible to join the Q Continuum. After much discussion, Picard agrees to allow Q to evaluate Amanda on board the ship and Picard begins an investigation of his own.

Q confronts Amanda and is immediately rejected as Amanda wants to live her life as a human.  She informs Crusher that she just wants to live her life as she intended and without Powers but the fact that she is Q complicates matters.   Crusher agrees and indicates that she will treat her as normal while aboard the Enterprise.  Q visits Amanda and explains the Continuum to her.  She is not interested in the infinite power that Q represents and finally reveals the one thing she desires.  She wants to see her parents and wishes to see what they looked like.  Q works with her to allow her to manifest them herself.

As Q tries to convince Amanda to work on her powers and embrace her heritage, Picard learns that Amanda’s parents were killed by a tornado on Earth.  This is something that shouldn’t have been possible which leads Picard to believe that the continuum killed her parents.  As Amanda trains, she begins to develop feelings for Riker.  She soon becomes jealous of his dating and, using her powers, she teleports them to a place for them to be alone. He rejects her forwardness and she begins abusing her powers to make Riker love her.  Realizing it is wrong, she sends him back to the ship.  It looks like our new Q has a lot to learn about herself. 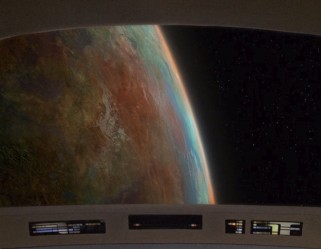 Picard and Q discuss Amanda and Picard learns that Q has been sent to not only evaluate her but that if she turns out to be a hybrid of Q and Human, he will be forced to terminate her.  Picard informs Amanda of her situation reveals the truth about her parents death as well.  After a discussion with Picard, Q informs Amanda that she has a choice, to either accept being a Q or give up her powers all together.  She intends to give up her powers but then a crisis occurs that could result in the deaths of innumerable people.   Amanda has made her decision and she saves the people of Tagra IV. She leaves with Q, knowing that she might never return.

This is probably the weakest of the ‘Q’ episodes but really give you a deeper look into the continuum.   It shows that the Q can and sometimes do choose to become human, even have offspring.  (this becomes a continuity problem later see below for details).  While Q is in the episode it is less about him than it is Amanda herself.

Amanda is a young woman who is trying to find her place in the universe.  Having won a chance to be an intern aboard the Enterprise, she finds herself taking the first steps to finding her life.  However, like Harry Potter getting his letter, she soon discovers that she is more than human and must decide which world she wants to live in.   This is something all of us face at some point in our lives, not so much the powers part, but the choice part.

At some point we are all faced with a decision to go one direction or another, this choice will likely determine our path for the remainder of our lives.  Many times we are not even aware that we are making a choice and only recognize it when we reflect on paths chosen.   Amanda’s choice was clear, we knew she would use her powers and ultimately embrace the Q way of life, but not all choices are that clean and easy, many are quite difficult. 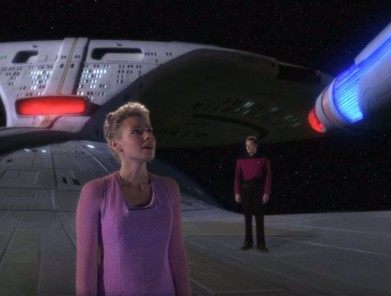 We learn that Jack Crusher died when Wesley was only 5 years old indicating that he never got a chance to know his father.

Fans of the Wonder Years will recognize Amanda as actress Olivia D’Abo.

Amanda is never seen nor heard from again but, as I mentioned above, she presents a difficult continuity problem later down the road.  In a later episode of Voyager, Q returns and is dealing with conundrum of his own.  In this episode he has a child with another Q, and this child is considered the first of his kind being born of two Q.   Amanda isn’t even mentioned and is pretty much ignored.

Thanks for reading the Retro TV Review,  I look forward to discussing the rest of the series with you, one episode at a time every Monday, Wednesday and Friday!  Next Review: Rascals