The Top Comic/Graphic Novel Picks of 2018

I read a lot of comics.  I have for most of my life but I have found myself slowly moving to the digital realm and, with that, I also find myself reading even more.  One aspect of digital that I love is the convenience.  I can take a trip and carry with me the entire run of Dan Slott’s Amazing Spider-Man without having to carry multiple bags,  they all fit nicely in my tablet and so I can literally take my library with me.  Dont get me wrong, I love a good physical book as well,  my insanely large Batman Graphic Novel collection isn’t going anywhere and I have no plans on departing with my Starman Hardcover set.  Those are mainstays and frankly look amazing on a shelf.

Enough with the format preference, let’s get to why we are really here.  Every year I like to call out some of my favorite comics or graphic novels that I have read.  These can be new series or even series that I have read in the past but my one caveat is that I have to have read (or re-read) them during the past year.  There is no particular order, just my favorites.    Shall we begin?  I am proud to present my

Fables is one of the most unique and interesting series that has ever been put to paper.  While many people will see it as somewhat of a copy of the tv series Once Upon A Time, Fables in fact came first.

The story is simple, until it becomes complex that is, It is about Fables, as in those fairy tale, folklore, legendary, fantasy characters that you grew up knowing and loving.  I am talking about everyone from the characters of the Land of Oz to Snow White, from Aladdin to the Big Bad Wolf (aka Bigby).  This series has them all.

The thing that makes this series very special is that all of these characters are real, living and breathing people who have come to our world to escape the tyranny of someone only known as The Adversary.   You see, The Adversary has taken control of all of the lands of the fables and, through terrible means has caused these people to become refugees from their own lands. Due to finding themselves a people without a land they have come to settle in present day New York City where they try to live among the mundane people of our world all the while hiding their true selves through various uses of magic.

Of course there are some Fables who can’t live among humans as they are hideous monsters or simply talking animals so, for them, they have a farm just outside of New York in a nice quiet part of the state.

The story closely follows the lives of characters such as Bigby Wolf (the local constabulary, Snow White (deputy mayor of Fabletown), Rose Red (Snow’s defiant sister) and many others as they try to keep the piece within their new home all the while defending it against the forces of the Adversary.

Encompassing 22 volumes in trade paperback in addition to numerous spin-offs that fill in some of the side stories, this is one of the most amazing and emotional journeys ever put into comic form.  I highly recommend it.

Jonah Hex has been around in comic book form since his first appearance in All Star Western in 1972.  Hex is one of those rare ‘Western’ characters that has somehow managed to remain just on the outskirts of popularity while being an important part of DC Comics history.

In 2006 Justin Gray and Jimmy Palmiotti reintroduces Jonah to a new generation of readers.  Diving deep in to the mythos of this reconstruction era anti-hero/bounty hunter, this team did what no one else has ever been able to do for Hex,  make him human and actually somewhat relatable.

You see, Hex is a conundrum in his own right.   The character having served in the Confederate army during the Civil War immediately has a black mark against him due to his choice of uniform but if one were to dive deeper, you find that his uniform is not indicative of the man inside of it.   In fact, he wears the uniform of the Confederate South to help him to identify those that are not…good people.

To Paraphrase Jimmy Palmiotti.  ‘‘It is the opinion of this author…that [Hex’s] insistence to wear the uniform stands as a symbol of personal shame. For he knew that anyone who saw the grey colors would greet him with Hatred and revulsion. Those who saw the grey coat and extended their hand in friendship, and the recognition of an idea which promoted the subjugation of another race, did so in peril. Jonah’s detestation of his fellow man was not solely focused on a specific race, color or creed. Jonah Hex loathed EVERY human soul with EQUAL enthusiasm.’

The stories inside each issues sometimes contain deep lessons in humanity and humility while others explore the more ‘Weird Western’ that was introduced by former Hex writer Joe Lansdale in the early 90’s.  The series is not written in a linear sense but, if read in it’s entirety, manages to piece together much of the legendary bounty hunter’s exploits in the late 1800’s.

If you like a solid action packed and well written story, this is certainly one for you.  If you dig the old west, then all the better.

Robert Kirkman is best known for his Zombie epic, The Walking Dead, but when he is not writing about the Resurrected he has many other stories in the works.  One of these stories could be considered his finest work and that is Invincible.

Taking the ‘Alien on Earth’ superhero trope and flipping it on it’s head, this series follows young Mark Grayson as he learns that his Superhero father ‘Omni-man’ isn’t the person he has believed him to be all of his life. It is all too common to find that the heroes that you have come to love in your life are not the people you believe them to be and it is in that crisis of identity that this series really finds its voice.  How does one recover from the realization that everything you knew and were taught, may have just been a lie your entire life? What do you do when the people you look up to betray you?

Kirkman has a firm grasp on the human condition and will take you through some very unexpected highs and lows through this series.  There are moments where you will literally gasp out loud and moments later laugh at something with equal intensity.   In all of my years of reading comics, this is one of the few that has managed to bring me tears and laughter in the same issue.

Consisting of 25 trade volumes and numerous spinoffs, this series follows Mark as he traverses the precarious path of love, life, forgiveness and finding out just what kind of hero he really is.

With fantastic art by Ryan Ottley and Cory Walker, If you want something fresh yet familiar, this is one series that you should absolutely read in its entirety.

This one made the list last year and makes it again this year.   Each issue I find more and more to love in this series. Coming from the relatively new publisher, Aftershock, the story follows sixteen year old Sadie Ritter.  Sixteen years old and pregnant, Sadie is afraid and trying to figure out what to do with her unwanted condition.  When she discovers that her baby is the antichrist, well, lets just say things get a little more complicated.

With fantastic art by Garry Brown and written by Donny Cates,  this takes the Rosemary’s Baby story in a whole new direction. Cates and Brown have managed, in just a little over a dozen issues, create a world that is both believable and fantastic in every sense of the word.

For fans of Horror and intrigue, Babyteeth is a must read.  I look forward to where this story is headed and hope to journey with Sadie and her child for many years to come. 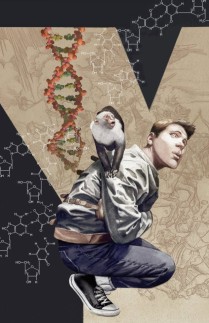 We round out our list this year with a series I have read many times over and will certainly read again.

The story follows Yorick Brown, a young man who soon finds himself (and his pet monkey Ampersand) to be the last mammals on earth with a Y chromosome.  Yeah, you read that right, he and his monkey are the last men on Earth.  However, Yorick only wants one thing, to find his girlfriend Beth who happens to be across the world in Australia.

Fighting of scientists, governments, militant female groups, and even the occasional ninja,  Yorick teams up with Agent 355 to help find a way to bring back males to the planet while searching for his girlfriend, Beth.  It may sound silly but trust me, with Brian K Vaughan (BKV) behind the wheel, this is one of the most emotionally satisfying stories you will read in comic book form.

Spread across 60 issues (or 10 trade paperbacks) this is one that every self respecting comic fan needs to have in their collection. Do yourself a favor and grab it now. Trust me, it’s a good one.

So there you have it. My picks for 2018. Where can you get any of these titles I just told you about? You can find them here on comixology or get it from your local comic shop! If you don’t have a local comic shop, I recommend unknowncomicbooks.com, they do good stuff.

Thanks for reading, If you would like to read more reviews I have a weekly series called Key Movies Of My Life that comes out every Thursday and also a tv review series called Retro TV Reviews here.