The James Bond series was a monumental series for me growing up and, as I planned on featuring one of the 20+ films in the series as a Key Movie, I just couldn’t choose.  Since I can’t choose a single one, I am reviewing each and every Bond film continuing with today’s entry, Skyfall.

In Skyfall, it is not Bond’s past that is in question but none other than M herself.  When an agent from M’s past returns with deadly intentions, it is up to Bond to figure out who this threat is and how to neutralize him before it is too late.  Bond is on his most deadly mission yet and this time it’s more than his life that is at stake.

As you know, I have been a fan of the James Bond franchise for most of my life, so I was delighted to hear that Craig was returning for another installment even after the odd entry that was Quantum of Solace.  When Javier Bardem was announced as the villain, I was doubly delighted as this was someone I knew could portray a righteous enemy to Craig’s Bond.

Seeing that this film happened to coincide with the 50th anniversary of Dr. No, this was one the producers had to ensure was the perfect Bond film.  Not only did they succeed, they excelled in every way.

Lets start by saying that Skyfall has one of the best cold openings in the franchise.  It is intense, it is powerful and one that really sets the tone for this installment. I have always loved when the cold open portrays the end of one of Bond’s missions and this one does just that, but this time with the end of Bond himself.  Killed in action, Bond is given the chance to retire but soon finds that being dead doesn’t quite suit him and, of course, returns to help after MI-6 is crippled in an attack.

From that point on, this film is a blur of action and suspense.  With Bond back in action, but not quite at 100%, our intrepid agent finds himself at odds with a new civilian oversight and his own inadequacies after being gunned down by friendly fire.  Even though M herself (once again played by Dame Judi Dench) believes in 007, you get a sense that he has doubts of his own whether he is ready or not for a mission of this magnitude.  You see, he has been tasked with finding out who or what is targeting MI-6 and to stop them before even more are killed.  However, it seems that M is in fact hiding something that could very well be vital to the mission. It seems that the villain is none other than one of her past agents, a man known as Raoul Silva.

Most of the Bond villains have been dead set on a single minded goal, world domination, vast riches, murdering Bond himself, but few of these enemies have ever had a personal grudge against MI-6 themselves.  With the exception of Alec Trevelyan, each of the foes Bond has faced hardly even knew the agent they were facing outside of his reputation.  This time, however, the villain knows more about MI-6, Bond and M herself than any before. Played by Javier Bardem, Silva comes off as the most personal and intense villain that has ever graced the screen in a Bond film.  He is dark, manipulative and every bit an equal to Bond save one feature, he has no sense of remorse and this makes him even more dangerous than Bond himself. The thing that really sets this villain apart is his vendetta against M herself.  It goes without saying that being an agent in the British Secret Service would be both a physically and mentally stressful to any human being, but this entry shows us what happens when one of MI-6’s best breaks.  No, not simply flipping sides like Trevelyan did but completely breaks and becomes the antithesis of what he was trained to be.  This is Silva, he is what Bond would be should Bond ever lose his mind, should 007’s mind ever crack under the stress of being the best at what he does.

Like each and every other film in this franchise, there is at least one female lead that Bond has some kind of relationship with.  Most of the time, this woman is used as little more than a conquest for Bond to pursue and, honestly, shows just how misogynistic this franchise can be with Bond being the life long womanizer.  However, although Bond does have some conquests, this movie features the original Bond Girl in a much larger role than any movie before it.   Played by Naomie Harris, not only do we see the first appearance of Moneypenny in the Craig run as Bond, but we see her as the agent she was meant to be.  No longer serving as just a secretary to M as she has in most of the past films, Moneypenny is an agent in her own right, even accompanying Bond in his missions, and also ends up being the one that kills him in the opening segment.  Although not mentioned by name until the end, it was a delight to finally see Moneypenny get her day in the sun as the field agent we all knew she was all along, adding a much needed depth to a character who has been in the franchise since the start.

Of course, we can’t have a Bond film without a love interest for Bond and this one certainly does not change that tradition.  This time we are introduced to Severine played by Berenice Marlohe.   Severine falls into the traditional, gorgeous woman working for the villain role that many of the Bond Girls in the franchise fall into however Marlohe plays the role with a grace and dignity that is rarely seen in this type of role.  She is afraid of Silva but knows her place in his organization and does everything she can to survive it, even trying to get help from 007 himself even though she knows it will mean her death.  She, of course, meets with a grizzly fate as most of the women in Bond’s life do, but this time, she doesn’t last nearly as long as previous women he has encountered.

With Silva being dead set on capturing and killing the head of MI-6, we finally get a deeper and more focused view on a character that is usually relegated to a side role, one that gives out the mission and makes pithy remarks as to how Bond performed on said missions.  For the first time in the franchise, M herself gets to be the primary focus of the story.  As the mission is more personal to the Villain, the story itself feels more personal with Bond protecting the one person in his life that has both accepted and challenged him at every turn.  It gets even more so when they find themselves at the very place Bond was raised, Skyfall. Dench does an amazing job in her final appearance as M in the Bond franchise, cementing her portrayal of M as the quintessential version of the leader of MI-6.

Additionally, this entry marks the return of one of the most Iconic characters in the franchise, the quartermaster himself, Q.  Played by Ben Whishaw, this is the youngest and most modern Q that we have ever encountered.  Gone are the gadgets and special sci fi devices that kept Bond alive in past entries, this Q is one of practicality and simplicity preferring to outfit our agent with specialized pistols and tracking devices.  When Bond questions this, Q responds in a manner worthy of Desmond Llewellyn himself,   Were you expecting an exploding pen? We don’t really go in for that any more. 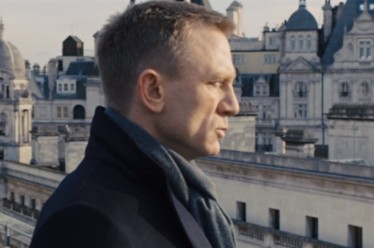 Bond in this one is portrayed as an agent who is nearing the end of his days.  He is showing his age and, with that, it seems that even the legitimacy and abilities of MI-6 is put into question.  This is a man who has been in action for far to long but still manages to be the best there is in terms of skill and cunning.  While he may be slowing down a little, there is nothing that can stop this agent from completing his mission.  Craig once again shows that he has what it takes, presenting a Bond that has more depth and character than ever before.  Had this been his final appearance in the role, it would have served as the perfect swansong for his time behind the Walther PPK, but, like Bond, Craig was far from done, returning in SPECTRE, we’ll talk about that one next week.

Of course, no Bond film would be compete without a theme song and this one is certainly not lacking in this department.  Performed by Adele, this is a return to the classic feel of the franchise established with films like Goldfinger and The Spy Who Loved Me.  It is a soulful and powerful song as only Adele could perform and, to me, is among the finest of the Bond film themes.

The film itself is the perfect love letter to Bond Fans and a celebration of 50 years of the secret agent franchise.  Bringing back all of the key players from Q to Moneypenny and even hitting on nostalgia with the return (and ultimate fate) of the classic Aston Martin DB5, this is one that was made for the fans.  It pulls no punches, accepts no substitutes and even ends with a nod to the classic series.  This is possibly the perfect culmination of a half century of Bond adventures rolled into a single film.  No matter how hard they try it will be hard to meet, or even exceed, the sheer quality of storytelling this film provides.  In many ways, this could be considered one of Director San Mendes’ finest works along side American Beauty and Road to Perdition.

You can grab this one pretty cheap here for around $8.  Or the set called The Daniel Craig Collection that has all four of his films so far.  Between this one and Casino Royale, the set more than pays for itself.

Of course, the trailer: