Time travel and the dangers therein are explored in the episode that originally aired on January 2, 1995, this is Past Tense Part I.

Visiting Earth to address the situation with the Dominion, the crew find themselves transported to the past, but it is a past that was known for it’s rocky history.

Taking the Defiant into orbit around Earth, Sisko and the crew prepare to beam down to the surface to conduct a briefing on the situation with the Dominion. Beaming Sisko, Dax and Bashir to the surface, O’Brien is shocked to find that they have not arrived at their destination.

Sisko and Bashir awake to find themselves rousted by security guards who demand identification.  Referring to the two as Dims, the guards inform Sisko and Bashir that they are in the year 2024 and need to be escorted to a Sanctuary District.   As they take them away, it is revealed that Jadzia has been left behind unconscious. Jadzia is soon awakened by a man who asks if she was jacked.  She immediately acts like she was mugged and identities her com badge as a brooch that was thankfully not taken.  He escorts her a safe place to help her find her identification.

Back on the Defiant, O’Brien finds that the transporter beam was affected by Chronoton particles that had built up from using the ships cloaking device.  He soon finds that a temporal anomaly occurred at the time of the transport.  He is not sure what it means but it is a clue.  Before long, O’Brien discovers that the trio were transported to San Francisco but in the past, centuries earlier. It isnt long before O’Brien finds a way to use the transporter to hunt for their officers, but they only have five or six attempts before they run out of chronoton particles.

After being escorted to a Sanctuary District, they soon find that they are in an impoverished part of the city, a place Sisko identifies as a huge mistake of the 21st century.  Soon they are processed and the guard is shocked to learn that Sisko and Bashir are not on file in any way.  The Guard provides them with forms to fill out and they soon discover that the time before the Federation was not a good one. It is not long before Sisko realizes that they are only a few days away from a historical event known as The Bell Riots, one of the most violent and most important periods in Earths history.  What is about to happen changes the face of the United States for the better, but they can not interact in any way without the fear of changing history.

Sisko and Bashir are soon interviewed and are identified as ‘Gimmies’, people who can work and contribute to society.  She apologizes to them, informing them that they will need to stay in the district until they can be placed in a job.  The social worker warns then to watch out for the guards and the Ghosts, other people who are not interrogating well into society.  Sisko and Bashir begin to look for a place to sleep and soon come across someone being mugged.  Sisko stops Bashir from involving himself and the two continue along their way. 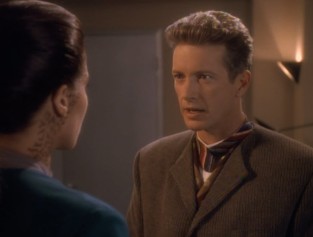 Jadzia is quickly able to find a way to get ID from the help of her new friend who turns out to be a media mogul by the name of Chris Brenner. Soon, he makes arrangements to find Jadzia a place to stay and, after initialing a search for her friends, he invites her to a party at his home at a later date.   At the party, Jadzia begins to learn about the current time and finds that the upper class have no clue about how bad the social situation is.  She soon discovers that Sisko and Julian may have been taken to a Sanctuary District.  Although it will be difficult, Brenner agrees to see if he can help find her friends.

After finding a place to sleep for the night, Sisko and Bashir make a deal with some locals to get access to their roof.  Swapping cloths, the two make their way to the roof and soon encounter a man and his sick son.  Julian volunteers his help despite Sisko’s protests and finds the young man to be have only some cuts and bruises from being jumped by ghosts the night before.   After helping, the man explains that they will not be leaving any time soon unless the people trapped in the Sanctuary unite to make a difference.  He is dissapointed to learn they are not interested in helping and only want to be left alone.

That evening, Julian is attacked by a Ghost for his food card and they soon get into a fight.  As the fight escalates, another man steps in to help only to be stabbed in the stomach.   Sisko is shocked to learn that the man who was injured was none other than Gabriel Bell, the very person who was responsible for the events due to occur in the next few days,  the very man the Bell Riots were named after.  They have now irrevocably changed history and must find a way to course correct it.

Back on the Defiant,  Kira and crew learn that the Federation has vanished.  It seems that something has occurred making the Federation and Star Fleet disappear from existence.  They now know that Ben and team have changed the timeline and they must find them before it is too late. 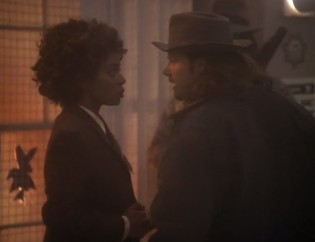 Sisko and Bashir soon learn that a rally is planned for the next morning to help change things. Before long, the two learn that the riots have begun when one of the dims attacked a guard.  Sisko and Bashir rescue the guard only to find the Ghost that attacked them in the processing center holding the workers hostage.  Sisko cooperates with the dim in charge and soon Sisko identifies himself as Bell, Gabriel Bell.

Very little is known about the events between the rise of Khan Noonien Singh and the events of humanities First Contact with the Vulcans in 2063′  So when Deep Space Nine tackled another Star Trek Trope of time travel, they were able to fill in some of the blanks establishing what Earth was like only thirty years prior to First Contact and thirty years after the rise of Khan.

We learn quickly that while many people had found prosperity, it was mostly on the backs of those considered….undesirable.  Instead of facing unemployment, mental illness and other social issues head on, the US government decided to bury the problem at hand behind a wall, in something akin to concentration camp known as Sanctuary Districts.   Sure, on paper it looked good,  this was a place that had free housing, free food, a waiting area for those in need, but the reality was that it was an order-less dumping ground for societies unwanted and people who were just down on their luck.

Upon Arriving, Sisko makes it clear that they need to follow the guidelines set forth concerning time travel.  To involve themselves would be to risk changing history and not necessarily for the better.  However, there wouldn’t be much of a plot if something didn’t go wrong so, of course, something does.

Avery Brooks is fantastic in this episode, really showing who Sisko is and what he stands for.  He is not one to idly stand by and watch people suffer but he also believes in following protocol when it is absolutely necessary.  While he does have to take on the persona of a historical figure in order to repair history, he is almost reluctant to do so at first.  It is indeed an interesting situation and one that would not see a resolution until part 2.

Thanks for reading the Retro TV Review,  I look forward to discussing the rest of the series with you, one episode at a time every Monday, Wednesday and Friday!  Next Review: Past Tense Part II