The holodeck.  A place to relax a place to train, a place to enjoy some vacation but what happens when someone prefers the fantasy over reality.   For a completely immersive experience, it would be easy to lose yourself in something like the holodeck from time to time, you may even become addicted.  Originally airing on April 30, 1990 this is Hollow Pursuits.

Reginald Barclay is a Lieutenant in engineering who has troubles dealing with his fellow crewman and ops for the holodeck instead.  Meanwhile the Enterprise faces a threat that this introverted officer may have the solution to. 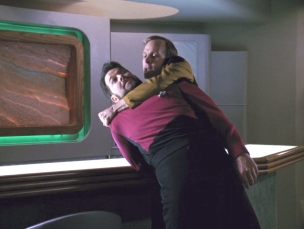 We open the episode with an unknown Lieutenant in ten-forward being insubordinate and assaulting the senior staff. After beating up Riker and LaForge, Counselor Troi takes a liking to him.   What is going on here?!   oh, it just turns out that this is just a holodeck program and the unknown Lieutenant is none other that Reginald Barclay, a lowly officer who is not well liked on the Enterprise. Then again, he’s not a very good officer either. He is always late and very…absent in other ways as well.  Honestly, it is a miracle he made it through starfleet.

Riker and LaForge take their issues with Barclay to Picard and Picard instruct LaForge to find a way to get him to tow the line.  Picard informs LaForge that the Chief Engineer needs to accept this new Lieutenant as part of the group and work hard to accept him.  In an attempt to comply, LaForge invites Barclay along to join the Senior Engineering staff for the morning briefing. He ultimately embarrasses himself and we next see him talking with Counselor Troi.  They get intimate and we find out again, he is in the holodeck.  This guy has a problem.

During a break in Ten Forward, Geordi discovers that there is something wrong with the internal systems as a cup one of the crewman is holding has melted in his hand and begins to leak. This could only have been caused by an issue in the power systems and LaForge asks Barclay to investigate them…all 4,000 of them.

After meeting with Guinan to discuss Barclay and get some insight into his problem child, LaForge finds Barclay in the holodeck interacting with absurd recreations of his fellow crewman.  After witnessing a sword fight between recreation sof himself, Picard, Data and Barclay, LaForge is less than amused.  Embarrassed, Barclay offers a change of ship assignment as he knows he doesn’t belong on board.  Laforge is understanding and gets Barclay to open up about his insecurities.  Barclay is an introvert and very shy.  His holodeck diversions are his only way to cope with this issue.  LaForge encourages him to talk with Counselor Troi and all but orders him to do so despite Barclay’s protests. LaForge is called away by O’Brien only to find that the transporters are now malfunctioning and could kill anyone who uses them.

After Barclay talks with Troi, he retreats to the holodeck and is late for another meeting. Riker gets fed up and finds Barclay back in the holodeck with his recreations of the crew.  While LaForge and Troi find it therapeutic, Riker is not amused and wants the program destroyed.  After running into Trois holographic representation, she too is no longer amused. They soon find Barclay and LaForge takes him to engineering to fix the problem.  Soon the ship stops responding and, as it speeds up, they can not stop the ships acceleration.

In the emergency, Barclay figures out the issue and saves the day.  I won’t go into details as it involves all the great techno babble but they figure it out and the ship is saved before it shakes itself apart due to the speed the ship has accelerated to.

In the end, Barclay announces to the bridge crew that he is leaving, it all turns out that he is on the holodeck again and walks out after saying goodbye.

It is a nice change of pace getting to see the ship from the perspective of an ‘everyday’ crewman. Series like this tend to only focus on the main characters and the introduction of Barclay gives us a new perspective.  Until now most Starfleet officers have come off as brave or infallible but this shows us that they are really just regular people.  Not every officer is perfect, that is okay but not everyone on board feels this way.  Unfortunately, Barclay’s performance leads to other crewman to talk about him behind his back and treat him a little unfairly. They give Barclay the nickname Broccoli (due to him being like a vegetable) which ultimately embarrasses him and Captain Picard.

As a viewer, you find yourself thinking poorly of Barclay at first as well.  He isn’t Enterprise Material, as Riker suggests, in fact he probably shouldn’t be on any ship.  The man is a walking disaster.  It isn’t until we get deeper into the story that we find that his problems stem from his insecurities and this is where the story really takes shape. Ultimately, the episode about being different and how to accept those differences in yourself and others.  By accepting those differences, you soon find that those people you thought poorly of may actually have something to contribute.

You really get a look into how other people perceive the Senior Staff on the Enterprise.  In this episode, Riker comes of as a total bully to Barclay, Geordi comes off as very impatient and Picard seems to only want things to work out for his crew.   Their portrayal is WAY out of character (except Picards for the most part) and I think that may have been intentional.   To me, I think this was a way for the viewer to see them as Barclay sees them and not how they really are.   He is intimidated by Riker, thinks Geordi hates him and has utmost respect for Picard.  The latter is even more devastating to Barclay when Picard mistakenly refers to him as Broccoli to his face.

This episode also addresses something that would be a real issue should holodecks exists, holo addiction or ‘holo-diction’. Barclay uses the holodeck to unwind and as a way to cope with his insecurities.  This has led him to run to it any time he makes a mistake or when he feels insecure (which is most of the time it seems).  Should such a device exists, this would surely be an issue that would arise as escapism is a real thing.  Seeing how addictive things people enjoy can be, the holodeck would be the ultimate escape for people looking for solace from the real world.

As a kid growing up I was the introvert and the outcast,  so Barclay’s character really spoke to me in many ways.  My escape mechanism was entertainment as well, but in the form of video games, tv series (like this one), books and more.  I can easily see how the Holodeck would be an idea medium to retreat into your fantasies.  In some ways, I am glad they do not exist.

We learn more about Guinan’s background when she tells the story of her Uncle Terkim, the social outcast of her family.  She found him to be someone to look up to as a child.

Barclay is played by Dwight Schultz of A-Team fame.  This is not the last time we see Reginald Barclay.

We finally get to see more of the Engineering crew and Geordi’s leadership style.  While he is very open to ideas, he comes across as a little impatient when it comes to people who may need a little extra guidance.

Picard gets a nice moment where he doesn’t accept that an officer aboard his ship may not be suited for duty on board the Enterprise.  His solution, for his Senior Staff to find a way to reach this man and make it a priority.  This inclusive nature seems to have stemmed a bit from his dealings with Wesley Crusher over the past few years.  I highly doubt First Season Picard would have been so forgiving.

Thanks for reading the Retro TV Review,  I look forward to discussing the rest of the series with you, one episode at a time every Monday, Wednesday and Friday!  Next Review: The Most Toys