Key Movies Of My Life: Superman IV The Quest for Peace (1987)

Superman has always been a symbol for Truth and Justice but one of his biggest mission statements has been his never-ending quest to bring peace to the world.  This has been a reoccurring theme in most of his comic adventures, even going to the extreme in the Video Game based series Injustice.  However, it was Superman IV that really set the stage for this peace

Lex Luthor (Hackman) returns to face Superman (Reeve) in the final Superman film in the classic 80’s franchise. This time however, using Superman’s drive to rid the world of nuclear weapons, Luthor creates a foe powered by the Sun that proves to be more than a challenge for the Big Blue Boy Scout.  It’s the Man of Steel vs The Man of the Atom in Superman IV The Quest for Peace. 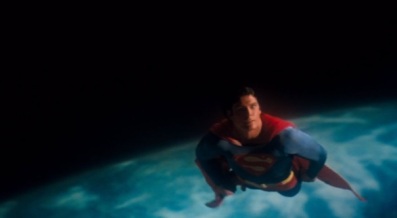 There was nothing more exciting for a kid under ten than going to the theater to see a superhero film in the 80’s.  Every Superman film released was an event and you can be sure we were at the theater opening weekend to watch the latest in the adventures of the Metropolis Marvel.

In the late 80’s the world was going through a pretty dark and difficult time with the nuclear arms race.  It felt like, at any moment, anyone could launch a missile causing the world to end in a flash of light and fury.  It seems that Christopher Reeve himself felt that there was no better hero to rid the world of these catastrophic weapons that Superman himself and helped pen the 1987 film that would unfortunately go down as one of the worst films in the franchise to date.

I still believe that fiction is best at providing a sociopolitical statement if it does so while being subtle and introspective.  As with my issues with the current Twilight Zone series, Superman IV does little but hammer a social statement over the heads of theater goers world wide.  Was it an important matter, sure, but did it really have to be so blunt, not at all.

That being said, Reeve, even in his worst film as the Big Blue, is still hands down the most believable and relatable Superman that has ever graced the big screen.  His portrayal has a level of gravitas that is unparalleled with any other actor that has donned the suit since. I don’t mean to undercut any of the latter actors but, I think even they would agree, Reeve was the embodiment of the Man of Steel in more than just stature.  He captured every aspect of Superman even influencing the look and feel of the character in comics and media for decades to come. That being said, the filmmakers still did some rather odd things to the character in this film that I won’t even get into. Speed building vision?  Whahu?

Much like Reeve’s portrayal of Superman, Margot Kidder comes back for one last run at the role of Lois Lane, once again providing a definitive version of the character that would influence Lane’s portrayal for years after.  Kidder and Reeve have an undeniable chemistry that is apparent even in this film.  It is a shame that this would be the last one for both of them but I guess all good things do come to an end.

Gene Hackman returns in this entry as Lex Luthor after sitting it out for part 3.  This time he really dives in as Luthor accepting the campy mad scientist role with his unparalleled hatred for Superman resulting in the creation of a villain like no other. Unlike his previous appearances, we finally get to see the wealthy eccentric version of Luthor that has graced the comics for years.  Unfortunately, we are also introduced to his nephew, Lenny, played by John Cryer. While Lenny is meant to be more of the comic relief in this one, he is more of a distraction than anything as the filmmakers attempt to give the kids of the 80’s a character to connect to.  While Cryer does all he can to make the role his own, this part feels rather forced and ultimately becomes one of the most forgettable roles in the film.

The story itself is an overblown campy ridiculous mess.  In a rather juvenile attempt to create an arch rival for our hero, we are introduced to Nuclear Man via a plot that feels straight out of one of the worst classic TV series episodes.  Luthor uses the (now proven false) method of cloning Superman using one of his hairs.  This results in a version of Bizarro that is powered by the sun and literally collapses when exposed to shadow.  I mean, where is Batman when you need him right?  Not only did they create a new villain for Superman to battle, they also made him the result of Superman’s good deed of tossing nuclear weapons into the sun.  What makes even less sense is that, with Nuclear Man being powered by Solar Radiation, his attacks should have little effect on our hero as Superman himself is powered by….you guessed it, The Sun!  I guess too much of a good thing can hurt anyone but seriously, Superman affected by a scratch from the nails of a radiation powered being, wow.  It’s hokey, it’s bad and, frankly there is little I can say as an adult that can defend it.  From today’s perspective, this is by far one of the worst solo Superman Movies ever made (although Batman Vs Superman comes awfully close to taking that crown.) I won’t get into how irresponsible Superman is with the moon and how we see a human in space without a suit who doesn’t immediately suffocate but hey it’s a comic book movie so why should it be beholden to logic…right? 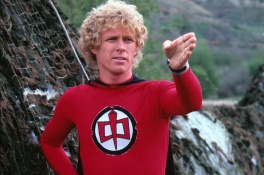 On a Side Note, I couldn’t help but notice how the villain looked similar to the hero of the tv series Greatest American Hero (GAH). I have to wonder if this wasn’t a shot across their bow seeing that GAH was somewhat of an analogue to Superman and his story. Plus Warner did file a failed lawsuit due to the similarities. Maybe this similarity was their form of revenge? Stranger things have happened.

All that being said, as a Kid, I lapped this up.  This was well before my deep dive into DC lore and, while we still had debates as to the validity of the fight, our eyes were glued to every moment on the screen. For the first time, Superman was addressing an issue that was actually happening in our own world and, while taken to the extreme and done in a very ham-fisted manner, it was important to us to see our hero try to make the world a better place. Sure, Nuclear Man was an abomination, Lenny was a forgettable fool and the story was a pretty silly premise but it was Superman and it still managed to hold on to the one thing that today’s theatrical Superman films are lacking, Hope.  Throughout the film, no matter how bad things got, there was still a sense of Hope that resonated throughout.  It may be a bad film, but it is still loads better than the dark and oppressive version that we have now.  We need a Superman that is the best of humanity and we need him now.

If you have to have it, you can find it in a rather inexpensive set that includes the rather ill-conceived semi-sequel Superman Returns.  I may have to do a write-up for that one in the future.

Until then, I am grateful that we had a chance to see Christopher Reeve in his defining role.  His portrayal of Superman will forever have an impact on the character no matter who is wearing the blue, red and yellow uniform.