Struggles both physical and emotional is the theme of the day on the episode that was originally aired on November 25, 1996.  This is The Ascent.

After crashing on an inhospitable planet, Odo and Quark must learn to work together in order to survive.  As the two find themselves in peril, Jake and Nog move in together after Nog returns to the Station from Starfleet Academy.

Visiting his brother Rom, Quark finds his brother nervous at the return of his son, Nog.  Quark surprises his brother with several cases of Root Beer only to be interrupted by Odo who informs Quark that the Ferengi will be placed under arrest once and for all.

The two find themselves on a runabout on the way to present Quark in front of a Federation Grand Jury.  Quark begins to try and talk the former Changeling out of his mission with a game of Fizzbin but finds his travel companion to be less than amicable. 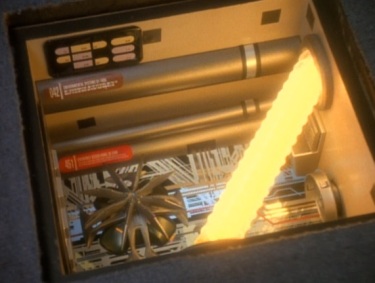 Four days later, Quark finds his traveling companion, and being trapped on the runabout, to be less than enjoyable.  Hearing a buzzing noise, Quark tracks it down only to find that someone has installed a bomb on the ship. After attempting to beam the bomb off the ship, Odo accidentally detonates the explosive causing the runabout’s systems to be destroyed.  Directing the ship to a Class L planet, the two prepare for the impact of the crash. As the ship crashes, Quark admits that he is being summoned to explain his dealings with the Orion syndicate and that it was likely them that set the explosives.  After the crash, the two find themselves with no way to communicate with the outside world as all of their systems have been destroyed in the explosion, including their rations. 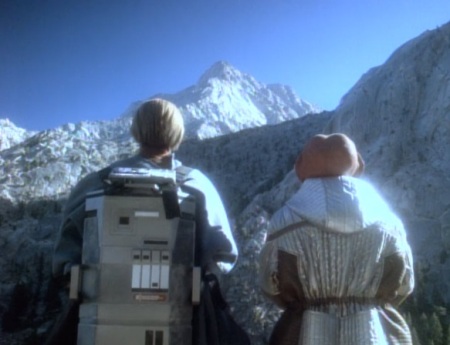 Trying to find a way to communicate their distress, they soon determine that they need to climb a nearby mountain in order to place a transmitter at it’s peak.  Braving the cold, the two split the available thermal gear between them and head up the mountain. Three days later, the two find themselves without food, only to find themselves losing hope when they realize that the peak is much further away than they originally believed.

Working their way up the mountain, Odo is shocked to learn that Quark is going to testify against the Orion Syndicate.  The two soon find themselves at odds with one another as the days drag on. After a brief fight, Odo slips and breaks his leg, causing Quark to have to administer first aid (after passing out at the sight of the break).  Quark, determined to save his friend, makes a litter to carry Odo up the summit.

It soon becomes clear to them both that there is no chance for survival with the two of them completely exhausted and broken.  Quark, thinking of his brother running the bar and his nephew joining Star Fleet, finds the energy to push forward, carrying the transmitter the rest of the way up the mountain.

Thinking that Quark has died in the attempt to save them both, Odo begins recording his final log only to find himself beamed aboard the Defiant.  He is greeted by Worf, Bashir and Dax who inform him, much to his dismay, that it was indeed Quark who saved their lives. In the infirmary the two acknowledge their distaste for one another but are pleased they both survived the ordeal.

Story B: The Odd Couple

Ben Sisko watches on as his son Jake packs his bags to move into his own quarters with Nog, who is returning to the station for his field studies.  While Ben is trepidatious of his sons move, he recognizes that he has to let his boy out of the nest.

Afterward, Sisko greets Cadet Nog to his field studies aboard Deep Space 9.  Sisko is less than enthusiastic when Nog assures the Captain that he will take care of Jake, preventing the Captain’s son from getting into trouble.  Moving into their new quarters, it soon becomes clear that Nog is not the same Ferengi that Jake saw leave for the Academy.  It seems that this new Cadet Nog is determined to get Jake into Academy Shape no matter what. 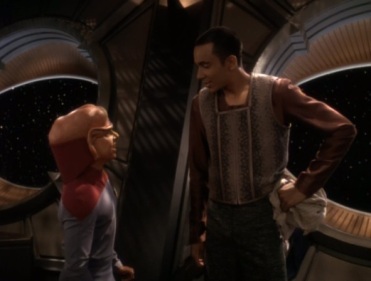 Returning home after a shift, Nog is upset to see that Jake has trashed their quarters.  Nog insists that Jake clean up the area and the two begin fighting over the mess causing Nog to move out thanks to their inability to compromise.  Soon Rom and Captain Sisko have a discussion and form a plan to get the boys back together again as they recognize the two need each other.

Captain Sisko soon informs his son that, due to regulations, Jake will need to give up his new quarters if he does not find a roommate.  Nog reluctantly agrees to move back in and soon finds a middle ground with his human friend.

This is a great example of a quality ‘filler’ episode that, not only manages to move some of the pieces into place for future stories but also does so in a way that works with the story it is trying to tell.

Both stories take a different aspect from the classic Odd Couple trope.  In one, we have a great story of survival dealing with two rivals coupled with a similar, yet far less deadly, story of two old friends who find that they have grown dissimilar in their separation. It is through each of their struggles with the elements and personalities that both sets of companions find a common ground leading to their ultimate redemption in the end.

I have always loved the dynamic between these two sets of characters. To begin with, Quark and Odo have had a rivalry from the start.  From the beginning, Odo has made it abundantly clear that he is aware of Quarks illegal dealings but also has a respect for the Ferengi’s, somewhat skewed, code of ethics. Time and again they have each proven that their rivalry has become somewhat of a friendship based on mutual distaste for one another and that neither of them really want any harm to befall the other.  Honestly, should Quark have been arrested by the Federation, I imagine Odo would have found life on DS9 a little less satisfying than it once was. 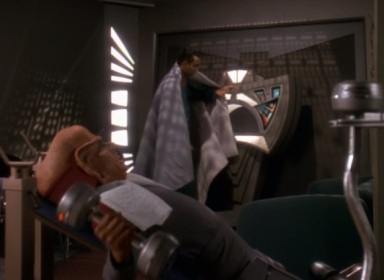 On the other hand, we see Jake and Nog reunite in what should have been a joyous occasion only to be sullied by the changes in both of their lives.  This one is one that really establishes that, not only was Nog not fulling around about joining Starfleet, but also, that the two of them have grown immensely since the last time they were together.  While Jake has had far less character development in his time on the show, we finally get a chance to see just how much he has grown from the young wide-eyed boy he was when we first met him.  However, it is Nog that has had the most development off screen changing from the troublemaker Ferengi Boy to a slightly overachieving cadet determined to use his new skills and abilities to better those around him.  In many ways, the two characters have pivot each other with Nog now in the more responsible roll and Jake falling into the Oscar Madison role.

Overall, this was a great lighthearted episode that really sets the stage for Nog’s return to the series and continues to build on the relationship between Odo and Quark.  This season just keeps getting better.

Thanks for reading the Retro TV Review,  I look forward to discussing the rest of the series with you, one episode at a time every Monday, Wednesday and Friday!  Next Review: Rapture