Eddington returns and Nog finds his nerve in the episode that originally aired on May 12,1997.  This is Blaze of Glory.

Upon discovering the Maquis are launching an attack on Cardassia, Sisko is forced to work with Eddington in order to stop the Maquis from starting a war.  Meanwhile, Nog discovers that Klingons are not easy to deal with.

Story A: The Return of Eddington

As Ben, Jake and Nog have a meal together, their repast is interrupted by General Martok who informs Captain Sisko that they have intercepted a signal from the Maquis indicating that the terrorist group have launched missiles toward Cardassia.  Martok informs Sisko that the Klingon Empire provided the Maquis with cloaking devices and he believes that they have outfitted missiles with this technology.  Sisko realizes that, should these missiles hit their targets, it could start a war with the Dominion that could destroy them all.

After having no luck locating the missiles on their own, Sisko decides to visit Eddington in his Federation prison cell.  Eddington indicates that while he has nothing to do with the missiles themselves, the only way Sisko can stop the attack is to locate the launch site and deactivate the warheads from there.  Sisko offers Eddington his freedom in exchange for his assistance but Eddington refuses, telling the captain that he would rather die in the impending attack from the Jem’Hadar. Soon, Sisko contacts DS9 and informs them that he has taken Eddington into his custody in order to hunt for the Maquis missile site. 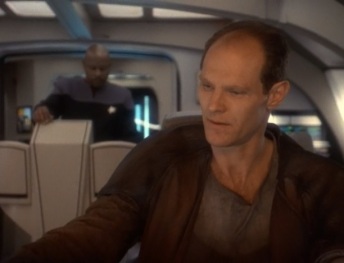 Traveling together, Eddington and Sisko discuss the downfall of the Maquis.  Eddington blames Sisko for the destruction of the Maquis believing that Eddington himself was the best leader the terrorist group ever had.  Sisko makes it clear that, had the Maquis brokered for peace, they would still be in existence today.  Eddington disagrees but, seeing he is a captive participant, he has no choice but to remain on the shuttle with the Captain.

Eddington awakes as Sisko informs him that two Jem’Hadar warships are heading toward them in the Badlands.  Sisko calmly informs his captive that it is up to Eddington to get them out of their situation.  Eddington is shocked when Sisko gets a Ractajino, forcing Eddington to take action in order to prevent their deaths.  Calling the Maquis member’s bluff, he lets Eddington handle getting them away from the Jem’Hadar, proving that the man does not have the death wish he claims to have.

Escaping the Jem’Hadar, Eddington begins their trajectory toward the missile site.  Soon he discovers that the Jem’Hadar has found them again.  Eddington turns the tables when he informs Sisko that the Captain must adjust the engines flow regulators while the engines are engaged, something that is very risky at best.  Sisko makes the changes despite the ship coming under attack, resulting in the destruction of the Jem’Hadar ships.  Sisko, a little worse for wear, forces his captive into taking them to the launch site.

Landing at the missile Launch Site, Sisko and Eddington find it overrun by Jem’Hadar Warriors.  Soon finding themselves under attack, Sisko realizes that he must rely on Eddington to help get them through the attack.  Using a pipe as a distraction, Sisko attacks the warriors allowing Eddington to fire upon the suspecting Dominion soldiers.  Taking down the enemy, the two soon discover that the remainder of the Maquis have been killed when they come across the bodies of Eddington’s friends. Eddington is devastated that he has failed his friends but acknowledges that they need to stop the missiles in order to prevent the attack on Cardassia.

Breaking into the control room, Eddington and Sisko are pleased to find Eddington’s wife along with some survivors.  It appears that the missile threat was a ploy to get Eddington out of prison so that he could be reunited with his family.  Sisko is both pleased and upset at the situation knowing that while there really is no threat to Cardassia, he was lied to the entire time.  Eddington is determined to rescue his friends and, with the Jem’Hadar between them and freedom, they work to lead the remaining Maquis to freedom.  Soon, however, Eddington is hit with a blast and demands that Sisko leave him to die in order to rescue Eddington’s wife and their people.  In the final attack, Eddington is killed while Sisko rescues the survivors.

Back on the station, Sisko and Dax discuss Eddington’s fate.  Sisko acknowledges that this may have spelled the end of the Maquis. Dax observes that there was no better end for the traitor, going out in a Blaze of Glory.

In Quark’s bar, Nog monitors Klingons in action, waiting for them to break the station rule so that he can step in.  Just as he is about to step in to escort the Cardassians to the brig for breaking the noise ordinance, Nog falls backward in his chair making a fool of himself.

Arguing over Nog not checking before he comes home, Nog sees Klingons illegally loitering on the promenade.  Standing up to the Klingons, the Ferengi informs the Klingons that he will arrest them should they not move along.  Acknowledging how brave the little Ferengi is being, Martok takes his fellow Klingons away much to Nog’s relief.  Regardless, Nog has gained the General’s respect.

To be completely honest with you, I am not a fan of Eddington.  Eddington has been a thorn in Sisko’s side for some time now and, to be honest, there is no better end to this rather complex (and slightly annoying) character than to die for his cause. That being said, this episode really didn’t feel necessary and, frankly, if it was to give Eddington some closure, we already had that with him going to prison.

That aside, I did enjoy the sense of danger that the station feels during this event.  With the Dominion appearing and essentially taking over Cardassia, their threat this season seemed to be rather lacking.  Sure it is clear that they are setting up a foothold in the Alpha Quadrant but it never felt like there was a true threat of an attack at any given point.  For the first time this season we actually see the tension when it seems the other shoe is about to drop in the form of missiles heading toward Cardassia. This tension is seen even more so when Quark is seen in the infirmary with a head-wound from his patron Morn.  While this scene can be interpreted as a throwaway joke, it also really give us a sense of the underlying tension that has been building behind the scenes.  In a way, while the story was unnecessary for the greater whole, the foreshadowing this episode provides is of incalculable wealth.  Things are coming and it will not be a pleasant experience.

Outside of the Dominion threat, the fall of the Maquis and the foreshadowing, we have some wonderful character development from an unlikely character, Nog.   From the beginning, Nog appeared to be little more than a side character relegated to filler humor.  Over  the past few seasons, with his joining Star Fleet, Nog has turned out to be one of the most interested side characters on the series.

Here is a young Ferengi who truly wants to better himself but is not interested in following the traditions of his people, instead opting to join an organization that is the complete opposite of the Ferengi Alliance.  His growth as a character has been fascinating to watch over the course of the last season and, thanks to the great performances by Aron Eisenberg, Nog has really come into his own.   Thankfully, this isn’t where it ends, he has a much bigger role to play in the coming season.

Overall, this was a lackluster episode that really didn’t accomplish much, but what little it did accomplish was important enough to not consider it a total loss.  Mostly a filler but still better than the worst of TNG.

Thanks for reading the Retro TV Review,  I look forward to discussing the rest of the series with you, one episode at a time every Monday, Wednesday and Friday!  Next Review: Empok Nor