The military, a place to grow, a place to learn, a place to find yourself. That is, unless you are Bill Murray and Harold Ramis that is. In that case, all bets are off. This is Stripes.

John and Russell realize that they hate their jobs and decide to join the Army together, soon discovering that the military may not be up to their speed. Starring Bill Murray, Harold Ramis, Warren Oats, Sean Young, John Candy, John Larroquette and many more, this is a classic comedy depicting the life of two screw-ups who face the biggest change in their lives. 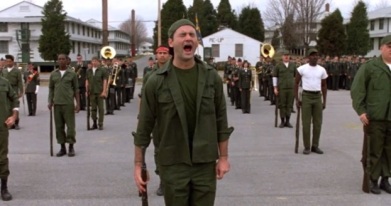 I loved Bill Murray growing up, heck I still do, but growing up he was one of my favorite comedic actors. The guy had a certain charm and wit about him that really just resonated with me and I never wanted to miss one of his films. While I was far too young to see this in theaters when it first came out, once I was old enough, we rented it and it quickly became one of my favorites.

I saw this after seeing Ghostbusters for the first time so it was a delight to see both Murray and Ramis in a film together prior to their time busting ghosts. Ironically, not only were these two in the film together, it was also directed by Ivan Reitman with music by the great Elmer Bernstein, both of whom worked on Ghostbusters as well.

This is an 80’s comedy classic through and through. In many ways this film serves as a precursor to the 1984 film Police Academy but manages to remain less on the zany side unlike the later film. That being said, not only is this one of Bill Murray’s funniest roles, but it also stars a ton of actors who would later have quite the career. Through the film you can see the talent of Ivan Reitman at the helm as he allows his actors to have fun with the script improvising throughout, creating an interesting level of reality mixed with the comic nature of the film.

If you look to this as being a good example of the military or even the Basic Training experience, you are sorely misinformed. At it’s core this film serves as a parody of the military depicting some truly insane and unbelievable things. In terms of plot, this is simply a story about what happens when a group of misfits manage to find themselves in one extreme situation after another. There is no underlying message and no moral theme, it is simply a fun movie that is mean to entertain. Sometimes though, that is all you really want in a film. Be warned though, the humor is more on the adult side of things, and sometimes tends to be a little crass, but if you are up for classic 80’s comedy flick, you are sure to enjoy it. ‘And that’s a fact, Jack!’

This is one that is still available in both DVD and BLURAY format with a great extended edition available as well. For modern audiences, this one may have a few moments that are a little hard to accept. First time viewers need to keep in mind that, while this film manages to do a great job avoiding some easy jokes many other films of it’s time revel in, it is still a product of it’s time and might be a tad bit offensive at times.