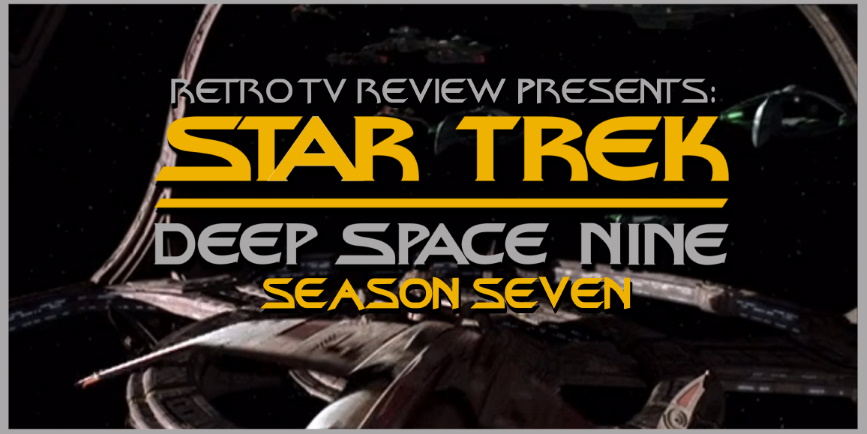 It’s murder on the Promenade (plus various other parts of the station to be exact) and there is only one person who can solve the crime. Ezri Dax?!  Originally aired on February 10, 1999 this is Field of Fire.

After a string of murders, Ezri Dax must investigate using the memories of a killer from her past, Joran Dax.  Soon, however, she begins to question if she was in fact involved… 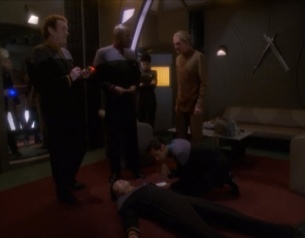 Miles, Julian, Dax and Kira celebrate the victories of their newest officer, Lieutenant Ilario. After a wild night, Ezri escorts the young Lieutenant back to his quarters to sleep off his night of drinking.  After returning home, Ezri is awakened only to find out that Ilario has been murdered.

Upon investigation, Odo finds that, while Ilario was killed by a projectile weapon, the evidence of a close range shot indicate something is missing. While Odo investigates the murder, Ezri grapples with the murder and her past hosts history with that very thing.  She soon begins to have strange waking nightmares involving Joran that make her begin to wonder if she, herself was in fact responsible for the death of her friend. The memory of Joran offers to help her track down the killer and, when a second officer is murdered in the same manner as Ilario, she realizes that she may need to take Joran up on his offer. 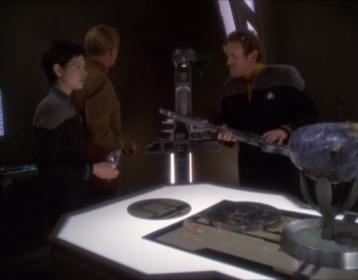 As Julian and Miles discuss the matter, Miles realizes how  murders took place. Exploding a Melon in front of Odo and Ezri using a specialized gun, Miles demonstrates how he used a micro transporter to transport a bullet in midshot just inches from his target.  While this gives them a method, the motive is still unknown.

The investigation continues and Ezri finds herself still struggling with the emerging memories of Joran.  Walking the Promenade that night she runs into Worf who asks his advice on whether she should ask Joran for help or not. While she never specifies who, he encourages her to make the right decision as he knows she can handle anything as ‘she is Dax’. Returning to her quarters, Ezri summons Joran using the Trill Right of Emergence.  Joran arrives and immediately sees that this is going to be a difficult encounter. 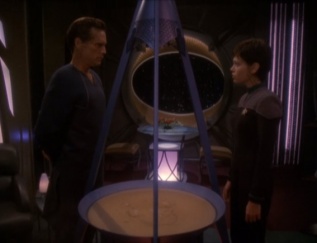 In order to get into the mind of the Killer, Joran asks Ezri to put herself in his place.  Taking Mile’s gun out of storage, she activates the tracking device and begins tracking people through the station.  Joran asks her to find a target and allow herself to hunt like that of the killer. In her playacting, she realizes that the killer is a methodical and calm killer who has no emotional connections.  Joran uses the moment to encourage her to kill and she refuses, rejecting his strength over her.

As she struggles with Joran in her investigation, she is shocked when a young officer is chased through the Promenade.  Pulling a knife on the Ensign, Ezri subdues the young officer but is stopped from killing him by Odo.  Sisko confronts Ezri who worries that Dax has been under an undue amount of stress but allows her to continue the investigation despite her extreme reaction toward the innocent Ensign.

Returning to her quarters, Ezri tries to push Joran back into her subconscious but is interrupted by the news of yet another murder.  Determined to get to the bottom of things, Ezri dives in further and soon discovers that the common element are photos of laughing people in each of the victim’s rooms. She realizes that the killer is likely a Vulcan who had something so terrible happen to them that they have started lashing out on anyone who shows happiness. 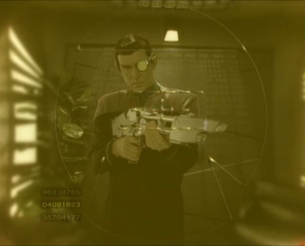 As the two investigate, they soon find their killer by accident while riding in a turbo-lift with him.  He is indeed a Vulcan and, even though they are certain he is the one, Ezri realizes she needs further evidence before making an accusation.  Looking into the Chu’lak’s past, she discovers that he is a survivor of a horrible disaster making him a great suspect for the crime.  Using the targeting gun, she focuses in on Chu’lak’s quarters where discovers that his next victim will be here.  She watches as he prepares his weapon and targets her only to discover that she is in fact targeting him.  She fires seconds before he does, wounding him in the process.  Heading to his quarters she is tempted to finish the job on Jorans encouragement but ultimately rejects that part of her.  Calling the infirmary, Ezri asks Julian to assist in the matter.

Back in her quarters, Ezri conducts the Rite of Emergence again placing Joran back into his place among her past hosts.  She knows that he is now stronger than he ever was and she will have to deal with him again some day. 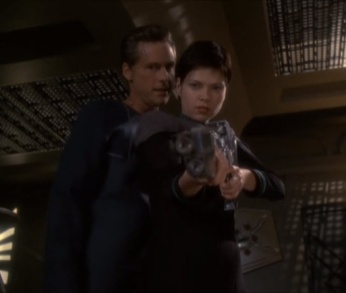 This is one that almost tries too hard. Serving as a sequel to the season three episode Equilibrium,  I feel like we already handled the character of Joran in a rather amicable way back then. It was understood that Jadzia had pretty much come to terms with the existence of Joran and was dealing with him as only she could.  One could have safely assumed that she and Joran had come to a mutual agreement.  Then again, this isn’t Jadzia and Joran knows that. 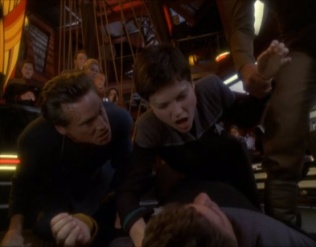 The episode itself plays out as a crime investigation with what amounts to a schizophrenic investigator on the case. What bothers me the most about the episode is that Odo is not onto what Ezri is doing, or at least doesn’t seem to be.  For a guy who is really damned good at his job, he seems to slack off at the most convenient of times.  That and, why the heck is Sisko even allowing the stations’s counselor to investigate a crime?  I mean, that just doesn’t play right in my head.  Helping the investigation, sure, but conducting her own?  eh, that’s a bit of a stretch.  Personally, I think it would have been better had Joran used the murders to try to convince Ezri that SHE was the murderer but couldn’t remember doing it only to find out that he was using the actual murders as a ploy to take back control now that Jadzia was ‘gone’.

Overall, not a horrible episode but not really one to write home about.  Seems the writers were just playing for shock value on this one and it all kinda fell flat. That being said, Nichole De Boer did a great job with what she had to work with so kudos to her for sure!

Thanks for reading the Retro TV Review,  I look forward to discussing the rest of the series with you, one episode at a time every Monday, Wednesday and Friday!  Next Review: Chimera