Today’s episode touches on a subject that is still being debated today. Sexuality and Sexural preference are addressed in the episode that originally aired on March 16, 1992.  This is The Outcast.

The Enterprise is asked to help find missing members of an androgynous race known as the J’naii.   Riker falls in love with with a member of the delegation and soon discovers that the J’naii people are shunned and ‘reeducated’ if they dare to accept a single sexual identity. 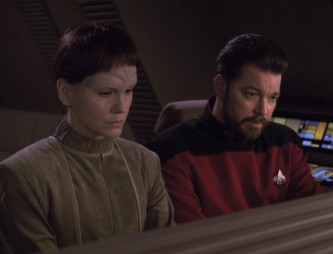 While searching for a lost J’naii shuttle, Riker and Soren (a J’naii delegate) work together to discover what has happened to the missing J’naii.   As they progress they begin to learn about each others species.  Soren is from a sexless race who prefer to identify as gender neutral and are expected to act as such.  It soon becomes apparent that Soren has romantic feelings for Riker.  Soren is fascinated by his ‘single sex’ and finds him someone they would be interested in a relationship with.  Unfortunately for Soren, such an act would be considered a criminal perversion in their species. 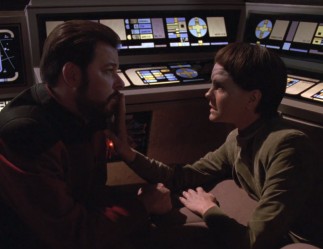 They begin their search but soon encounter a null space pocket that damages their shuttle.  As they work to repair the shuttle, Soren expresses that she is one of a minority that identifies as female.  She is forced to hide from her people and lead a life of solitude.  She grew up witnessing the bigotry and hatred of her people toward people like Soren. It is common practice for her people to employ psychotectic treatments to correct their perversion.   Soren has feelings for Riker and, although scared of the possible outcome of this becoming known, she expresses her feelings toward him.

After the rescue, Riker and crew are invited to the J’naii planet to attend a reception.  While there Riker and Soren kiss in private but their act is witnessed by another J’naii.  When Riker goes to see her, he finds that Soren has been arrested and is being sentenced as a criminal for being female.   Riker rushes to the planet where he finds Soren being sentenced for her ‘crimes’.  He attempts to claim that it was his fault but Soren speaks out. She fights for her right to identify as female despite the law and social stigma against it. Unfortunately the tribunal sentences Soren to receive treatment and Riker asks to give Soren asylum aboard the Enterprise.  They refuse and take Soren away.

Riker pleads with Picard to allow him to find a way to rescue Soren.  Picard warns Riker that any actions Riker takes on his own can not be sanctioned and could cost him his career.  Riker plans a rescue mission and is accompanied by Worf in his mission.  They mount their rescue only to find that Soren has ungone her treatment and no longer has romantic feelings for Riker.  She has been cured and no longer wants to leave with him.

Riker returns to the ship without Soren and they continue on.

Once again, this is what Star Trek does best.  The sociopolitical issues that they cover are done is such a great way and this one is no exception.   Covering gender identity, we encounter a race that has eliminated gender all together.  By doing so, they have eventually come to the mind set that there is only one gender and anything different is an abomination to their species.   However, as their species were once multi-gendered, there are members of their race who find themselves identifying as either male or female.   Soren is one of these people and has had to hide from her friends and colleagues all her life. 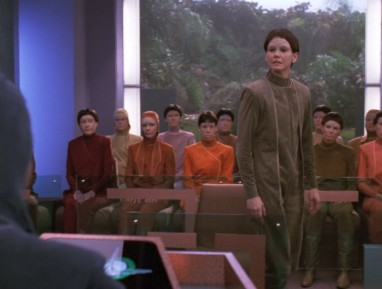 This episode is a direct commentary on the LGBT rights that were really becoming a major social political issue in the late 80’s and early 90’s.  This episode was a direct statement of the dangers of non-inclusion of people who think or act differently to the perceived social norms.  Many people in the 80’s and 90’s were afraid to come out as gay, bi or otherwise due to the social stigma that surrounded it.  We have come a long way as a society but there are still many groups who would deny the LGBT community their rights and that is where messages of acceptance like this are important.  This episode still resonates today as people are still being attacked and ridiculed for their sexuality despite the progress we have made.

The powerful statement from Soren before the tribunal beautifully sums up the episode:

What I need, and what all of those who are like me need, is your understanding and your compassion. We have not injured you in any way, and yet we are scorned and attacked. And all because we are different. What we do is no different from what you do. We talk and laugh, we complain about work, and we wonder about growing old. We talk about our families and we worry about the future. And we cry with each other when things seem hopeless.

As for the technical side,Frakes and actor Melinda Culea (Soren) dominated the episode together.  They exhibited a chemistry that was completely believable and resulted in one of Riker’s more tragic stories.   This is one of the few times we can believe that Riker has feelings for someone beyond a sexual attraction.  While Riker is rather flippant with his own sexual pursuits, Frakes does a terrific job showing true emotion for Riker in this one and you get the sense that he really loved Soren.  When Riker loses Soren to the unjust medical treatment, It is a sad and powerful moment that is beyond just ‘the one that got away’.

Sadly we never see or hear from Soren or the J’naii again.  I wonder how often Riker thinks of Soren on those quiet moments on the Enterprise.

We learn, during a poker game, that Federation Day is celebrated each year signifying the beginning of the Federation in 2161.

We find that Klingons have a very archaic view of sexuality through Worf’s indication that he is ‘bothered’ by the J’naii and their androgyny.

I normally try to stay away from making this blog socio-political in any way but, given the nature of today’s episode, this is an important matter that needs to be mentioned. Too many people find themselves victims of discrimination due to their sexuality or sexual preference.   For more information on how to support the LGBT community here is a link to many of the non-profits and charities you can give to.      However, if you really want to help, be an ally and be there for someone who wants to talk or needs your help.  Your best action is to be available and supportive.

Thanks for reading the Retro TV Review,  I look forward to discussing the rest of the series with you, one episode at a time every Monday, Wednesday and Friday!  Next Review: Cause and Effect