What do you do with a character who is literally trapped in a single room of the ship in a series that hinges on exploration and discovery? With the Doctor it’s a simple answer really, take him out to the holodeck. Originally airing on April 24,1995 this is Heroes and Demons.

After crew-members begin disappearing in the holodeck program of Beowulf, The Doctor is called in to find who or what is responsible for the missing crew. 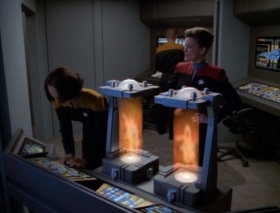 After beaming aboard samples of a nearby protostar, Torres and Janeway begin analyzing their findings. When Harry Kim is called to assist the two discover that he is no longer on the ship. Investigating his last known location, Tuvok and Chakotay find the holodeck program of ‘Beowulf’ running but for some reason it can not be shut down.

After encountering Freya, the two learn from her and her father, the King, that ‘Beowulf’ (aka Harry) has been taken by Grendel and feared dead. Fearing the worst, the Tuvok and Chakotay agree to hold sentry of the holographic castle and, after contacting Janeway with the news, they learn that the holodeck is malfunctioning due to the protostar emissions. It seems that Kim has been converted to energy and may in fact be dead. That night, while standing watch for the King, Tuvok and Chakotay begin to attempt to shut down the holo-program in hopes that they can recover Harry Kim. Soon, however, Tuvok and Chakotay come face to face with the energy beaing and vanish before anyone can beam them out.

With three missing crew-members Janeway and team know they need a way to get them back. Seeing that the holodecks matter conversion nodes are dematerializing people, Tom suggests using the one crew-member who can not be dematerialized, The Doctor.

After being convinced to accept his first away mission, The Doctor learns all he can about the poem Beowulf in preparation (as well as pondering his first real adventure on his own). Soon he finds himself face to face with Freya and introduces himself as Doctor Schweitzer. Taking him to the castle, Schweitzer is challenged to a duel by Unferth who soon finds that he can not hurt this newcomer. Freya announces that they have a new warrior who can best the demon known as Grendel.

That evening Schweitzer is invited to dine with the warriors of the King and he soon finds that Freya has taken a liking to him. Just as the two begin to find a kinship in their mutual loneliness Grendel arrives and begins it’s attack. The Doctor finally sees it for what it is, a large photonic energy formation that appears…alive. Grabbing his arm, the being manages to remove the limb just moments before Paris can rescue the Doctor.

After analyzing Schweitzer’s findings, Torres and Paris discover that the photonic energy is in fact a life form and somehow they have accidentally trapped it on the ship. Experimenting with one of the photonic energy patterns one escapes and returns to a strange lattices surrounding the proto star. In the process they discover three distinct energy patterns that may be their own crew-members. Believing that they have accidentally captured lifeforms and are facing a botched first contact situation, Schweitzer agrees to take the remaining energy being to the holodeck in order to make a gesture of peace with it. 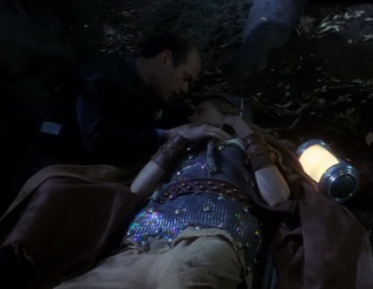 Returning to the Holodeck Schweitzer finds Freya and just as he explains that he needs to get a ‘talisman’ (a container with the energy being in it) to Grendel to defeat it, Unferth arrives claiming the Doctor is in league with the beast. Unferth attacks killing Freya in the process leaving the ‘Lord Schweitzer’ to return to the Castle to reclaim the talisman. Schweitzer bests Unferth but refuses to kill him due to his oath and reclaims what is his. Calling forth Grendel, the photonic being arrives and is sated when Schweitzer releases it’s fellow being. Accepting the Doctor’s offering, the being returns Kim, Tuvok and Chakotay seemingly unharmed.

The Doctor informs Janeway of his adventure and she commends The Doctor for his actions. She indicates that she will put a citation in the logs for their Chief Medical Officer. He thanks her and indicates that he has yet to choose a name for her to log as the name he had has too painful of a memory attached to it now.

The ‘holodeck malfunction’ has since become a trope in science fiction due to the numerous events that took place on a certain starship named Enterprise. Since that time we have seen sentient holograms emerge, crew-members in danger and many other rather interesting events all surrounding this incredibly common place device. To be honest, with how much the holodeck malfunctions, you would think that Star Fleet command would remove them until these bugs are worked out, or at least keep their use to a minimum. Nevertheless the holodeck remains and with it the danger that comes with it.

All that being said, I really love this episode. To have a full fledged adventure for the most unlikely of characters is really something to behold and man did they pull it off just right. This one could have easily fallen into the trope I mentioned above but somehow, in spite of itself, it didnt, it actually managed to be both endearing and fun.

So far we have gotten hints of the person the Doctor is becoming. Clearly far more than just an Emergency Medical Hologram, The Doctor, or Schweitzer as he is known in this episode, has quickly become a key member of this rag tag crew despite his rather terrible bed side manner. With the gruffness of Leonard McCoy, the deep empathy of Doctor Crusher, the vast knowledge of Julian Bashir and even a bit of the dry humor of Katherine Pulaski, Robert Picardo’s portrayal of The Doctor is more than just an amalgamation of the best and worst of the Doctors of the past, he takes those attributes and creates a unique and rather interesting holographic man. 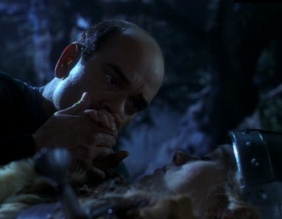 One aspect I loved from this episode is the Doctor’s further exploration into a name. We all take names for granted, it is something most everyone has and we even give names to inanimate objects. The Doctor’s name, in this case, is more than just a title it is a personal quest that parallels with the adventure he has in this very episode. While he seemed to have settled on one, this adventure of Life teaches him that some things are far too painful to remember, giving the name Schweitzer a much deeper connection that is ultimately abandoned by The Doctor. Will he ever get a name, well, I am not going to spoil that for the newcomers so we will just have to keep watching and find out.

Now, while the Doctor story was pretty touching, what is it with Janeway and hurting/capturing innocent space life? I mean, jeez the Federation is going to have the WORST reputation once Janeway get’s done with the Delta Quadrant. I mean seriously! ‘But There’s coffee in that Nebula!’ No Janeway you just cut a space amoeba. ‘Hey lets beam some energy off that star, it’ll make us go faster!’ No Janeway you just kidnapped three aliens from their homes, probably getting one of them in trouble for being late to dinner in the process. By now you would think that Janeway would be a little more cautious in her ‘explorations’ but no…of course she doesn’t. Then again, I guess there wouldn’t be much of a series without some random accidental alien assault now and again.

All in all, despite the rather flippant actions of a Star Fleet Captain ,this episode is one of the best as far as I am concerned. While Star Trek is known for having characters who strive to be more human, I have to applaud Voyager’s take on their version of Spock, Data and Odo. The Doctor’s exploration of what it is to be human is more than just finding his place in the universe, it is finding out what it means to be alive. The beauty of this exploration is that it is not forced in our face and announced but rather just explored in a very natural and logical way. Thankfully, as Janeway mentions, this is not the last adventure The Doctor gets to go on and that is something to look forward to.

Thanks for reading the Retro TV Review, I look forward to discussing the rest of the series with you, one episode at a time every Monday, Wednesday and Friday! Next Review: Cathexis

Special Thanks to Memory Alpha as they are one of the best sources for details on Star Trek information available. Although I have a pretty deep knowledge on the subject, they have proven invaluabl8e as a regular resource.