Training for the Maquis and a sick ship, it’s just another day in the life of Voyager in the episode that originally aired on May 22, 1995.  This is Learning Curve.

Tuvok begins a training session for some of the new Maquis members but things get dangerous when the ships bio-neural gel packs begin to fail. 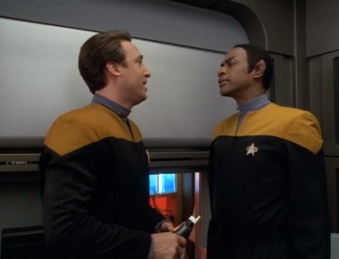 After her holo-novel is, once again, interrupted, Janeway discovers that the energy grid has been disrupted.  Tuvok soon finds the issue when he spots one of the new Maquis members, Crewman Dalby, having just replaced a malfunctioning gel-pack.  Attempting to explain the need to allow engineering to handle the matter, Tuvok soon finds that Dalby is still acting as if he is on a Maquis ship, handing things as needed.  Tuvok soon realizes that they may need to actually train the new crew members to understand proper Star Fleet protocol.

Discussing the malfunction with Chakotay and Tuvok, Janeway and her first officer realize that they may need to start switching some systems to isolinear circuitry in an effort to extend their limited supply of Gel-Packs despite their known reliability.  Tuvok soon brings up his confrontation with Crewman Dalby asking Chakotay and Janeway for their suggestions in how to handle the matter.  Janeway soon suggests that the Maquis Crew need to have similar training as the Star Fleet crew and she can think of only one person suited to the task having had already taught at Star Fleet Academy, none other than Tuvok himself (much to his reluctance).

The next morning Tuvok begins his training course and immediately runs in to issues with the four chosen by Chakotay (Crewmen Dalby, Chell, Gerron and Henley) who need additional training. After failing horribly at controlling the four new crew-members, Tuvok realizes that a more direct approach is needed.  Not long after, Chakotay dresses his four crewmen demonstrating the ‘Maquis way’ of handling insubordinate officers.  With Chakotay’s point made, the four report to Tuvok with the understanding that they will follow Star Fleet regulations.

With their tasks assigned, Dalby complains about his ‘punishment’ to B’Elanna who calls him our for being afraid to fail.  Soon they find another damaged Gel-Pack and Torres takes it to sickbay to be examined.  There she learns that the Gel Pack has an infection and that they will need to quarantine all of the other Gel Packs until they can find a cure.

Tuvok continues his training regimen with physical training, i.e. a climb through 50 Jefferies Tubes and a Ten Kilometer run, coupled with a battle simulation on the holodeck.  While the physical training appears to be progressing well, the command simulation does not go as planned. After Tuvok makes it clear that they are not following ‘Star Fleet methods’ he sees that the four have become demoralized and begins to question his training methods.

Tuvok’s answer comes from a most unexpected source when runs into Neelix in the mess hall.  Neelix explains that Tuvok should get to know his trainees and work with them using his Keela Flowers as an example of how the stems need to bend in order to survive.  Just as Tuvok is about to leave to contemplate this profound observation from his Talaxian crew-mate, Tuvok finds the source of the Gel-Pack infestation.  It seems Neelix has been making cheese and the bacteria has been escaping via a ventilation duct right above the prep area.

Exploring the possibility of the cheese being the issue, Torres takes Neelix’ Brill Cheese to Sickbay for further study. As the Doctor explores the bacteria in the cheese, Tuvok takes the time to get to know Dalby by playing pool with him on the holodeck.  There he finds that making friends with the Maquis members is not an option either. 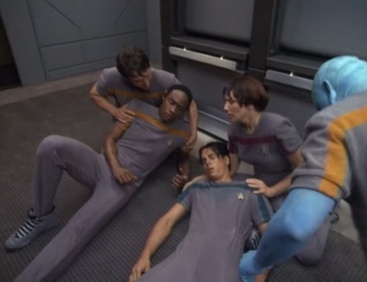 After discovering that the Gel Packs are infected with a Virus, the ship is hit with a ship-wide bio-neural failure.  With the ship in danger of losing life support, the Maquis members and Tuvok soon find themselves trapped in the cargo bay during a training session.  The Doctor suggests heating the bio-neural packs in order to give the packs a fever thus eliminating the virus.  Janeway works with Torres to super-heat the Gel-packs in order to kill the virus.  However, this causes further issues for the training team in the cargo bay when it begins heating up exponentially causing one of the members to be rendered unconscious.  Tuvok, ignoring his own tactical training, goes back to save Gerron much to the surprise of the others.  Tuvok, however, succumbs to the poison gas only to be rescued by the trainees.

With the virus eliminated, and the Maquis trainees well on their way, Voyager continues it’s journey home.

Is this a ‘Good’ Episode

If there is anything about this first season that could have been improved it is how the Maquis crew were incorporated into the rest of the crew.  While there are far fewer Maquis members compared to the full complement of the Voyager crew, it is a pretty large oversight not to give us more from these new crewmen even in subtle ways.  The only regular view we have of them is through the eyes of Torres and Chakotay but even those are skued as these two officers are willing to change.  This is where this episode works best, we finally get to witness the static that exists between the Star Fleet and the Maquis crew in a way that, while contained, really shows how difficult it must be to acclimate to this new life.

You have to understand something about the Maquis to fully appreciate their position,  the Maquis is a group who are essentially enemies to the Federation.  Having been effectively betrayed by the Federation when it gave up planets in the Nuetral Zone to Cardassia for political reasons, the former Federation citizens had only one real choice, fight or die.  While they did conduct various ‘terroristic’ moves, if you look at them from the view of fighting for their land and their rights, they really were just trying to survive against while fighting off the rather evil Cardassian government.  Now, imagine being forced to join the crew of an organization of people who you were essentially enemies with.  Sure the individual crew members probably have no ill will toward them but for the Maquis, this would be an almost insurmountable task.  The only thing going for them at this point is that their own Captain is second in charge and does all he can to maintain that they are indeed a single crew.  This, coupled with the recent revelation that one of their own was actually a Cardassian in disguise!  Oh yeah, the moral in the Maquis crew is at an all time low.

So it is no wonder that Dalby and the others felt the way they did and, when coming face to face with one of the most rigid members of the Star Fleet crew, this was not going to go well.  Thankfully, like most of the episodes, everything works out with Tuvok learning to be more flexible, but honestly, this episode would have been better had it been played out over the course of the season.  I mean, think about the character growth and it’s impact had this story built up over time.  Instead we get a snapshot intended to address the Maquis issues and resolve them in all of 45 minutes.

That being said, As a stand alone episode this is a fairly decent one, as a season finale, eh

Thanks for reading the Retro TV Review,  I look forward to discussing the rest of the series with you, one episode at a time every Monday, Wednesday and Friday!  Next Review: Season Two Premiere The 37’s