An empty threat, a real threat and a danger that really doesn’t matter.  All in the episode that originally aired on May 13, 1996. This is Resolutions.

After being forced to abandon both Janeway and Chakotay on a planet due to a terminal illness, Captain Tuvok has to either find a cure or continue on their journey home.

Okay, this is one of those episodes that really has little baring on anything before or after it.   The story is pretty basic and frankly it is one that I don’t think is worth diving in for a full synopsis.  That being said, I will spell out the key beats of the episode and leave it for you to watch on your own.

Eh, It’s not bad.  Not the most impactful episode ever but one that wraps up the Doctor’s Vidiian relationship story line and gives Tuvok a little more character development as a Captain (although he never puts the actual rank or red command uniform on).

The one thing this episode does do is give us a really good look at the characters of Janeway and Chakotay who really haven’t interacted on a personal level. While they both want to find a cure, Chakotay and Janeway have very different outlooks on life and acceptance of fate.  Janeway is one who is unwilling to give up no matter what, while Chakotay, on the other hand, is willing to accept his fate regardless of the situation he is in, especially if the alternative is to toil forever fruitlessly.   It is an interesting juxtaposition for these two characters and one that really shows why the two work well together as Captain and Commander. 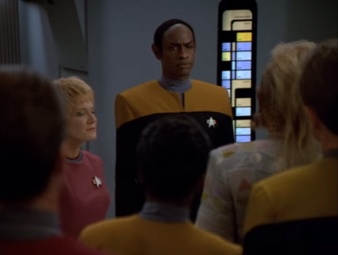 That being said, did the writers really think that the show was going to abandon the two lead characters on the show?  seriously?  Plus shouldn’t this be a lesson that command level officers NOT go on away missions?  They got infected by a virus via a bug bite.  A BUG BITE!!! Do they not have OFF or REPEL in the future?  Oy.

Overall, a totally throw away filler episode that attempts to drive home how much the crew loves Janeway and Chakotay and how much they need each other.  That and why Tuvok should never be a Captain himself. Sure he finally made the right decision and did an admirable job in his efforts but I mean, damn dude, you really need to chill…maybe use some of those Tuvix traits that I know you still have?

Thanks for reading the Retro TV Review,  I look forward to discussing the rest of the series with you, one episode at a time every Monday, Wednesday and Friday!  Next Review: The Season Finale Basics Part I