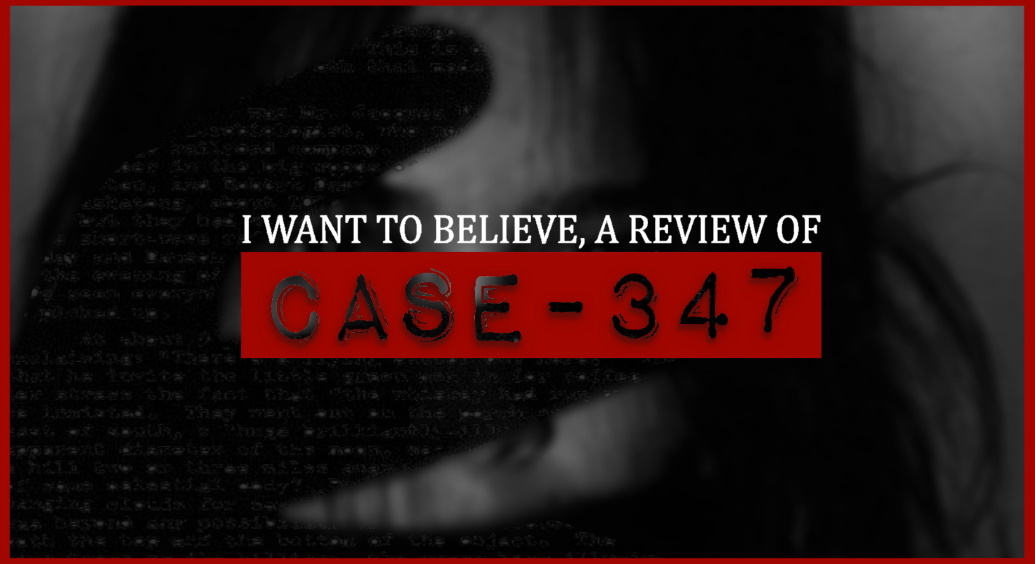 Found footage films are nothing new.  From the first commercially successful one, the Blair Witch Project, to the more recent Paranormal Activity films, they all have a similar theme and feel.  The purpose of a ‘fount footage’ film is to depict the feeling of reality in a fictional story.  With the promise that ‘everything you see is real’ or ‘this is based on a true story’, these films do all they can to bring the audience into the narrative unlike traditional films.

If you have been reading my blog you probably already know my love of Aliens and my desire to believe in the existence of UFO’s.  Ever since the first time I read Whitley Striber’s book Communion, I have found the prospect of Extra Terrestrial activity to be intriguing.  The idea that there could be beings from beyond our planet visiting Earth is a concept I can not ignore so when a film like Case 347 presents itself, I can not resist.

Starring Maya Stojan, Chris Wax and Jason Kropik, Case 347 takes on the found footage trend by creating a documentary from the perspective of a group of scientists who are attempting to debunk Alien abductions as nothing but Mass Hysteria, what they find, however, is something more.

Dr Mia Jensen (Stojan) leads a group of filmmakers in her attempt to prove that Alien Encounters and Abductions are a result of Mass Hysteria.  Using a collection of ‘found footage’ and depicted as Case 347, this film shows their journey from denial to…something else. 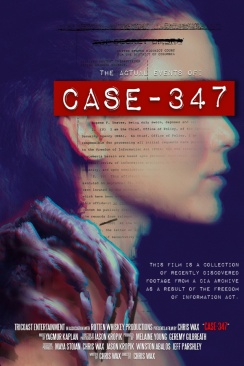 As I mentioned above, the found footage trend is certainly nothing new and, frankly, has never been a trend I have enjoyed.  To me most of them come across as contrived or forced in a way that makes the ‘footage’ seem fake.  Not so with Case 347.

Case 347 somehow manages to create a realistic view of Alien Activity and belief by taking all of the classic tropes and making them fresh again.  Everything is covered from Area 51, the existence of The Greys, Black Eyed Kids, and more blending all of the classic tropes in a way that not only works but makes it all seem fresh again. Interestingly, director (and one of the stars) Chris Wax manages to avoid treading over the same paths other films have by taking the original stance of attempting to debunk aliens instead of proving their existence. It is through this perspective that the film and the characters come across as unique and believable. The thing that makes this work is that the minimal three person cast sell it through and through by coming across as genuine in every moment of every scene.  There is honestly not a moment that doesn’t feel real giving it a true sense of being a legitimate documentary created using declassified footage.

Case 347 is great fun and absolutely worth watching.  Whether you believe in aliens or not, this is a solid sci-fi horror film that somehow makes the found footage genre work better than it has in a while.  Keeping the cast tight and believable through authentic dialogue and reactions, Chris Wax and his team do a fantastic job building the tension and setting the stage for something more.  Honestly, I would love to see this film done as a long form tv series in the vein of the X-files. Mia Jensen is a character I would love to follow further in her journey from disbelief to active participant.

What makes this film even more frightening is the recent release of UFO footage from the Pentagon.  While this film is technically a work of fiction, the concepts depicted in it could be something closer to truth thank we want to accept.

Case 347 is currently available via streaming platforms such as FLIXFLING, Vimeo on Demand, Vudu, Amazon, iTunes and Google Play.  If you love stories of Extraterrestrial activity as much as I do, this is certainly one for you as it is certainly one that will make you ‘Want to Believe’ again.