With the first season in the bag, Voyager has established itself as quite the adventure for the lone Star Fleet vessel far away from home. Now with a mostly competent crew, season two begins as Janeway and her crew continue to search for a way home.

Now, after being so far from home imagine discovering someone from the past in the most unexpected place in the galaxy. Kicking off season two and originally airing on August 28, 1995, this is The 37’s.

The Crew of Voyager encounter unexpected people from Earth’s past and a mystery as to how they got there to begin with.

After discovering rust particles in space Voyager finds a 1936 Ford Truck broadcasting an SOS through it’s AM Radio.  Tracking down the origin of this strange Earth relic, the crew find a class L planet and decide to land USS Voyager on the planets surface to investigate further.

After landing, the crew split up and Janeways team soon comes across an ancient earth aircraft, meanwhile Chakotay finds a cavern that may be the source of a power signature that they picked up from orbit.  Gathering the team, Janeway and crew enter only to find humans from various cultures on earth including a Japanese Soldier, a businessman and a woman with a jacket reading A. Earhart. It seems that Voyager has solved an Earth mystery light-years from it’s origin.

Returning to the ship the crew begin discussing their options.  After explaining to the crew who A. Earhart was Janeway surmises that the people who abducted Earhart and the others may be nearby and that they need to awaken the ancient humans to determine what they might know. 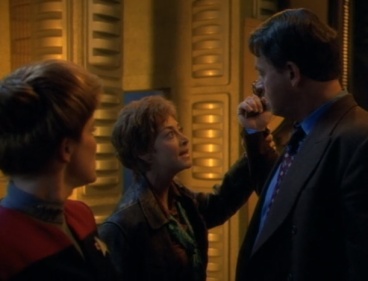 With Kes in tow, the team revive the eight cryogenicly frozen humans simultaneously and welcome them to the 24th century. Almost immediately the ancient humans are confrontational about the situation accusing Janeway and her crew of abducting them.  Janeway attempts to explain the situation to them but soon find themselves in a dangerous situation with the 37’s holding them hostage.  Before long Janeway and Earhart begin to talk slowly convincing the famous pilot of who and where they are.  Just as the group begin to emerge from the caverns they find themselves under attack by an unknown force.  It seems the aliens have arrived and have both Janeway’s and Chakotay’s teams pinned down.

Flanking the attackers, Janeway discovers that they are in fact humans who reluctantly agree to a ceasefire.  Beaming the wounded to Voyager, Janeway finds the human attackers upset over the ’37s’ being revived.  John Evansvlle explains that a species known as the Briori kidnapped the original 37’s and held them as slaves.  The human ancestors to the 37’s overthrow the Briori slavers but destroyed all of the technology in the process preventing Janeway from using any of it to get back home. Evensville is shocked to learn that Voyager has revived the 37s believing them to be long dead.

The crew soon learn that the descendants of the captured humans have formed a society and soon offer Janeway’s crew a chance to remain with them.  Janeway decides to allow the crew to decide for themselves if they wish to remain on this planet or continue on their journey.  Hoping to convince Earhart to remain with them on the ship, Janeway shows her much of the exciting changes that have transpired since her departure from Earth.

In the end the original 37’s remain behind with none of the Voyager crew choosing to stay on the planet despite the chance for a safer life.  Voyager departs leaving a human civilization behind in the Delta Quadrant. 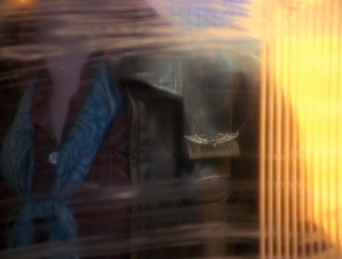 As a premiere episode this one is a little weak.  I mean, it is a solid story but it doesn’t seem like the sort of episode that would start off a new season of television. Apparently there is a reason for that.  According to Memory Alpha, this episode was originally planned to be the finale to season one, which honestly would have been a much better ending than what we got.

All that aside, the episode is pretty good.  Not only do we discover what happened to Amelia Earhart but we also find out what happened to many of the ‘abductees’ from Earth past.  It seem the ‘greys’ or the ‘little green men’ are actually a race called the Briori who enslaved humans and others and took them to the Delta Quadrant. The episode itself soon becomes a conundrum for Janeway and directly speaks to the rights of the crew and their decisions as people. 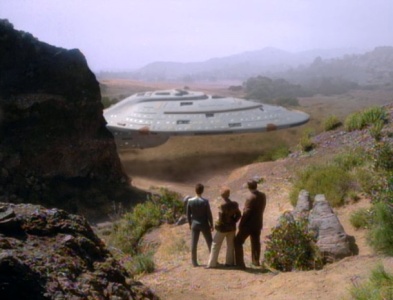 When the crew is offered a chance to remain behind with these human settlements, Janeway allows them to make their own decision and, for a time, it seems some of them may just take her up on her offer to remain behind.  We soon find that the crew is much more loyal to Janeway and Voyager than we thought and, while no one remains behind, it is a testament to Janeway’s leadership that she was willing to risk loosing her crew at the promise of paradise.

While the episode is solid, there is one major nit pick I have, not only does Voyager not detect the three human cities on the planet but, even though the crew get to visit them, we never get a chance to even see a matte painting of any of them.  This really makes it feel as if there is a major part of the episode that is missing making it feel rather truncated.

Thanks for reading the Retro TV Review,  I look forward to discussing the rest of the series with you, one episode at a time every Monday, Wednesday and Friday!  Next Review: Initiations