Alien Abduction.  Something that has yet to be proven although many claim to have experienced it.  This is the subject of the episode that originally aired on October 19,1992.  This is Schisms.

While Exploring a star system, the crew begin to experience restless nights. When a subspace pocket appears in a cargo bay, it soon becomes clear what is happening. 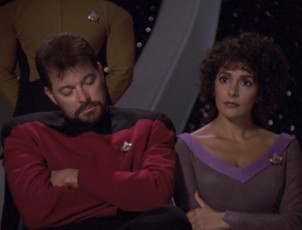 Riker is exhausted and finds himself late for a meeting with Geordi about the long range sensors.  Later that evening he attends Data’s poetry recital and ends up falling asleep (not that anyone wouldn’t). Afterwards he visits sick back where Crusher determines that he is not getting enough REM sleep.

Geordi and Data continue their work on the long range sensors when they detect a massive explosion in one of the cargo bays.   With the medical team in tow they arrive only to find…nothing wrong.   Riker asks Geordi to take a break for the night and to promise to wake Riker up in the morning as the Commander is continuing to have trouble sleeping.  LaForge arrives in the morning and, despite having ‘just gone to sleep’ Riker is perplexed to learn that he has slept through the night. 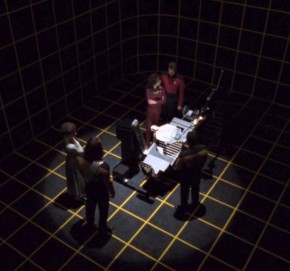 Others aboard begin to have similar issues, Worf overreacts to a haircut, LaForge begins to have VISOR issues and even Data notices that his internal chronometer is off by 90 minutes.  Before long they discover a subspace particle emission in Cargo Bay 4 and find it to be an unexplainable subspace rift. They soon determine that their subspace signals may have…attracted someone.

Riker continues to have issues and brings it to Troi’s attention.  She explains that there have been multiple accounts throughout the ship with others having similar issues as Riker.  She pulls them all together and they begin to discuss their experiences where they all realize that they all share a similar bond.  Going to the holodeck, they begin to reconstruct a table they all seem to remember.  After reconstructing the table they all remember, it becomes clear that someone or something is experimenting on them. 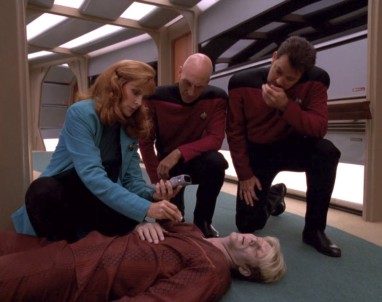 After Data indicates that it appears that he was removed from the ship without his knowledge, they discover that there are currently two crewmen missing from the ship.  Picard initiates a ship-wide alert and Crusher discovers that Riker has had his arm amputated and reattached without his knowledge. Things get even more intense when Lt Haggler, one of the missing crew-members, is returned to the ship on the brink of death.  Crusher determines that someone has changed his blood into a liquid polymer. 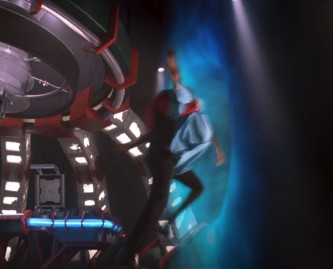 Knowing that the creatures will kidnap him again, Riker volunteers to a mission to discover what these things want.  He is fitted with a tracking device and is given a stimulant to keep him awake.  As the creatures begin their work, he activates the tracker and Geordi finds him in the subspace anomaly.   LaForge sends a graviton pulse to disrupt the anomaly and soon the creatures begin to retaliate. Before the subspace rupture closes, Riker grabs the missing crew-member and rushes through.  The anomaly disperses and leaves the ship. The Aliens are gone. 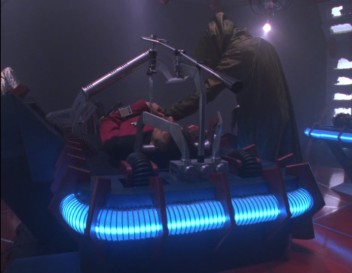 This is a solid entry for the fifth episode of the season.  Giving us a new threat unlike what we have seen before isn’t easy, and to add the horror element to it is pretty clever.  The disappointing part is that, although setup at the end to be a new ongoing threat, we never see nor hear from these creatures again.   They sure had no problem invading and experimenting on us, why stop after being discovered only once.  I am forced to wonder what the long term plan was for these creatures, if there even was one. It is a shame that we will never know who or what these creatures were.

I do have to wonder how it is that Data was affected by these creatures.  I mean, yes, he is experimenting with sleep but for them to be able to deactivate him, experiment on him and then return him with only some missing time is quite the feat.  It also makes me wonder what exactly they did to him, I mean having an android like that at your disposal would be quite useful for extra-dimensional beings. 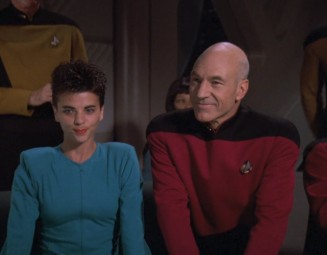 This is the last time we see Mr Mot, the ships barber.

Picard appears to be accompanying the poetry reading with a young woman who is not identified in this episode but has been referred to as Jae in past episodes and holds the rank of Lieutenant.

Outside of the main story we got a chance to experience the Poetry of Data.   This will not be the last time we hear the Ode to Spot.

The Ode To Spot.  here it is in its entirety:

Felis catus is your taxonomic nomenclature,
An endothermic quadruped, carnivorous by nature;
Your visual, olfactory, and auditory senses
Contribute to your hunting skills and natural defenses.

I find myself intrigued by your sub-vocal oscillations,
A singular development of cat communications
That obviates your basic hedonistic predilection
For a rhythmic stroking of your fur to demonstrate affection.

A tail is quite essential for your acrobatic talents;
You would not be so agile if you lacked its counterbalance.
And when not being utilized to aid in locomotion,
It often serves to illustrate the state of your emotion.

O Spot, the complex levels of behavior you display
Connote a fairly well-developed cognitive array.
And though you are not sentient, Spot, and do not comprehend,
I nonetheless consider you a true and valued friend.

Thanks for reading the Retro TV Review,  I look forward to discussing the rest of the series with you, one episode at a time every Monday, Wednesday and Friday!  Next Review: True Q