So here we are episode two of Lower Decks.  I know, I know, this episode came out a few days ago but I’m a little behind, sorry. You could say I am ‘late to the game’ eh…eh…. never mind.

Anywho, second episode in and, honestly, this is where this season looks to be catching it’s stride. (or at least figuring itself out), so let’s talk some Lower Decks shall we?

Rutherford finds some self discovery when he explores his options aboard the USS Cerritos while Boimler and Mariner have to escort a drunk Klingon to his destination.  Hilarity ensues, its a good time for…most everyone.

This is really a fantastic entry point for people who want to watch this series but are on the edge.  While the first episode did a great job setting up the characters and the universe, this is where things seem to just fall into place.  The story is a really simple one, Boimler and Mariner find themselves stranded on a planet when the Klingon they are supposed to escort steals their shuttle in order to get drunk…er…drunker.  While they are forced to track him down, Rutherford tries to change his career in order to make time with Tendi, who he is obviously a little smitten with.  In both stories we get some really deep character development that seriously establishes who these people are and why they are there.  I mean, this is the kind of character development that took Voyager three seasons to get to and only with half the crew, where Lower Decks manages to do it in…two episodes. I mean, sure it is technically a much smaller cast and being animated they have a little more freedom but still…this is no small feat.  Sure, there is a lot left to learn about the characters I am sure but after watching Envoys, well, I actually kinda care about what happens to these people.

The thing that really makes this episode shine is in the details and subtext.  While I have to get into spoiler territory to explain this it is totally worth it.  Let’s start with the ‘B’ story featuring Rutherford and Tendi.  Their story is mostly about why they are in Starfleet and what drives them.  Tendi is smitten with science and being on a starship in the medical field allows her to scratch that itch in every way possible.  So when she is excited about nearby pulsar and wants to share this excitement with Rutherford, it shows.  It is palpable and it is real.  Rutherford agrees to join her only to realize that he would have to give up his position in Engineering, a position he adores, but a promise is a promise so he literally explores his options on the ship.  I won’t ruin it for you but we get to see each of the ships divisions, Engineering, Medical, Command and Security in a way we have never seen before and it is an absolute delight.  What it boils down to though, these guys are geeks and they own it, which makes me so very delighted in every way.

Then we come to the ‘A’ story where Boimler and Mariner have to escort a Klingon General to a peace accord. Sounds simple right? yeah…not on Lower Decks it isn’t.  When General K’orin steals their shuttle, the two must work their way across the planet inadvertently revealing an obvious and rather uncomfortable truth in Star Trek Universe…. the Federation has a habit of stereotyping races.  Seriously, if you look back at the franchise there is a serious problem with this from STNG on,  all Klingon are warlike, all Cardassians are oppressive, all Bajoran’s are religious, all Ferengi are untrustworthy, you get the picture.  This is a pervasive issue throughout Star Trek and it is amazing how this single animated episode not only exposes it but makes it a very important plot point in a very clever way.  Again, I won’t ruin it for you but it is pretty great.

Bottom line, if this is what this series is going to be like, I am even more sold than I was initially. This episode brings back everything I loved about STNG while remaining fun and lighthearted the whole time.  Like the first episode it manages to pack in quite a bit of story into just thirty minutes.  I have to say I am really impressed.

Now, I neglected talking about this in the first review but even the opening credits segment and  Theme song is pretty terrific.  I mean, check this out.

Anyhow, I am really looking forward to the rest of this series, and have to say, I love that, even though the world is pretty shaky right now, it is really nice to be able to escape into a new Star Trek series again. 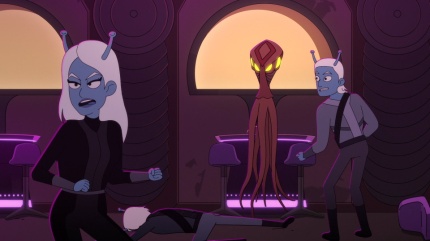 and of course…a few shots of next weeks episode.