The definition of what is considered Life is once again questioned in the episode that originally aired on November 16,1992.  This is The Quality of Life.

While working on a mining project, Data discovers that the robots they are using may indeed be sentient and their use is brought into question. 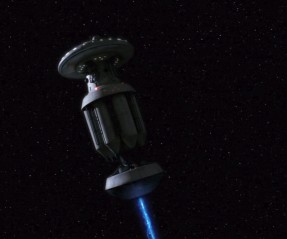 While working on a Particle Fountain Project at Tyrus Vlla, LaForge and Dr Farallon run into issues that threaten the project. She introduces him to a device she refers to as an exocomp and it repairs the issues in record speed.

Bringing the device on board the Enterprise, Doctor Farallon shows Data and Geordi her exocomp device.  She indicates that this device is one of her own design that she has programmed to learn from their experiences.   She requests that Picard delay his departure in order for her to demonstrate the use of the exocomps in completing the Fountain Project.   She is clearly infatuated by Data and requests his assistance on the project. 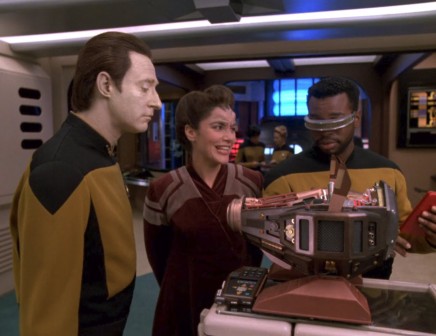 As they work, one of the Exocomps refuses to work with them.  The job it was asked to do was too dangerous and, in the interest in self preservation, it refused to do the job.  In order to determine the reasons for it’s refusal to work, the Exocomp is brought on board the Enterprise for analysis.  They find a grouping of additional circuit pathways that Dr Farallon indicates that she has seen before and was always forced to wipe the unit clean upon their appearance.   She is clearly upset at the setback and leaves the ship. Data takes the Exocomp to his quarters and discovers that the machine has repaired itself.  It would seem that there is more to this little device than they believed. 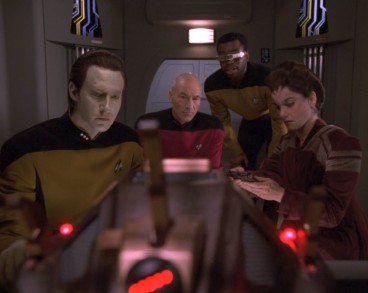 Data goes to Doctor Crusher to ask what Life is.  He is looking for a definition to help him determine if the Exocomp is alive. She provides an answer and he returns to the Fountain Project to ask Doctor Farallon to stop using the Exocomps due to his hypothesis that they are alive. 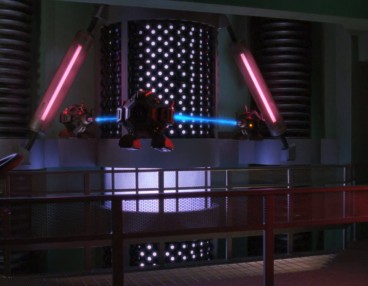 Picard visits the Fountain and, while there, the station falls under threat of destruction.  Picard transports the scientists to the Enterprise and is trapped with Geordi on the station.  The Particle Fountain begins to reach critical levels and, if not solves soon, Picard and LaForge will die.

Doctor Farallon suggests using the Exocomps to go on a suicide mission and be used similar to photon torpedoes.  Despite Data’s request against it, Riker orders their use.  Just as they are about to beam the Exocomps to the Fountain, the transporter fails.  Data has locked out the controls in order to prevent the deaths of the Exocomps.  Riker is furious, but Data explains his reasoning for his actions. Riker works with Data and suggests that they reactivate the Exocomps command pathways, giving them a choice in the mission.

Dr Farallon recognizes the Exocomps possible sentiance and leaves the ship acknowledging that she will not use them as simple tools any longer. She plans to study them and determine just what she has created. 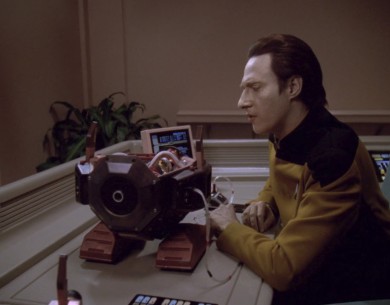 We are faced with yet another episode that questions life and the implications of synthetic life forms.  You would think by now, with the many versions of artificial life they have encountered, that the Enterprise or even Starfleet itself would have guidelines in place on how to react should such a thing present itself.   Even by this episode, Picard and the crew come up with random and meaningless tests to see if a thing fits their ever changing criteria of what life is.   It is frustrating to have such an enlightened crew go through the same motions over and over again only to get back to the same place they began…every time.

That being said, this is another episode directed by Jonathan Frakes and man does he do a solid job.  The man was born to be behind the camera and the quality of each of his episodes is astounding.  The real star in this one, however is Geordi’s beard. Just kidding,  although it does make its second appearance, even being the subject of the teaser intro, the new beard takes a back seat to Data and his quest for humanity. 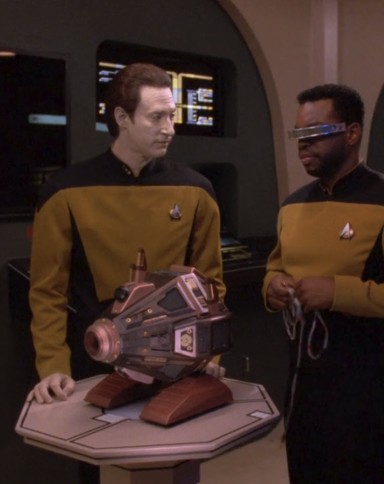 Constantly questioning his own existence,  Data is in a unique position of his own to not only recognize artificial life but to also understand it.  When faced with the possibility of new life in the form of the Exocomp, he feels it is his duty to not only cultivate it, but to also protect this new life, even if it means the deaths of his friends. It is not an easy decision but, as Picard so perfectly captures it in the end, “It is the most Human decision [Data has] ever made.”

On a side note, is it just me or do the Exocomps resemble a certain K9 companion from another science fiction series?

Geordi’s beard becomes the subject of conversation again.  To Worf it is a symbol of power, to Riker it is an age old tradition.   Crusher makes a wager with the three against their beards.  If she wins, they shave.  If they win, she dyes her hair.  Just when it looks like she will win, the Captain summons them, ruining their game and Crusher’s fun.

We never see nor hear about the Exocomps again. I like to think that they are running the Fountain Station themselves, ordering Dr. Farallon to perform impossible tasks.

Thanks for reading the Retro TV Review,  I look forward to discussing the rest of the series with you, one episode at a time every Monday, Wednesday and Friday!  Next Review: Chain of Command Part I