Picard is captured.  The Enterprise is under the command of a new Captain. The Status is NOT Quo.   Find out what happens to the the Enterprise and her crew in the second part of one of the most intense two parter episodes in the series.   Originally airing on December 21,1992, This is Chain of Command Part II.

Picard’s clandestine mission has failed and he is now captured by the Cardassians.  The new Captain of the Enterprise, Jellico, must help prevent a war between the Federation and the Cardassians from occurring even though the new Captains relationship with his new crew is falling apart. 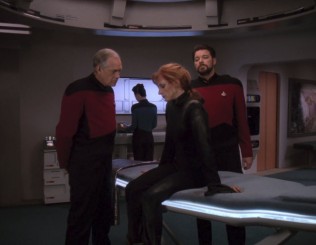 The Cardassians aboard the Enterprise inform Jellico and his senior staff that Picard has been captured.  Jellico and Riker find Beverly and Worf alive and take them aboard.  Riker requests the option of a rescue mission but Jellico refuses, claiming that there is no way to know if Picard is alive or not.  Riker is clearly upset but compiles.

The Cardassians show Jellico and Riker proof that Picard is captured.  Jellico denies that Picard was there on Federation orders and thus Picard is not considered a prisoner of war.  Riker challenges Jellico’s decision to abandon Picard and Jellico relieves him of command.   Jellico determines, with Data and LaForge’s help, that Picard was likely setup on purpose due to his knowledge and position.   This implies that they are planning an invasion in the sector and believe Picard to have information regarding the Federations defense of the area.

They soon discover that the Cardassian ship that had docked with them showed signs of being in a specific area of space.  They determine that this is where the Cardassian fleet is hiding and Jellico commands them to investigate. 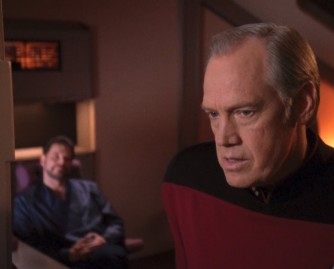 Jellico prepared for war.  He gears up the ship and informs the senior staff of his intentions.  The Enterprise is clearly no longer an exploratory science vessel, it is a war ship.  La Forge and Jellico discuss the refit of a shuttle that will be used on the new mission to attack the Cardassians.  Much to Jellico’s dismay, he learns that Riker is the best pilot on the ship and the most qualified to do the run.  Jellico hates that he will have to work with his former first officer.  Visiting Riker in Riker’s quarters, the new Captain explains the situation.  Riker enjoys making Jellico squirm and they both make it clear they do not like one another.   After making Jellico ASK Riker for help, Riker agrees and helps to place mines on the Cardassian ships they have found.

Story B: The interrogation of Jean Luc Picard 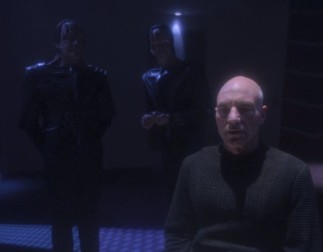 Picard is being interrogated by Gul Madred.  It is clear that they have drugged him and that he is getting weaker.  Later, Gul Madred talks with Picard about the possible military action that is coming.  Madred doesn’t like the answers Picard is giving and decides to escalate matters.  He strips Picard of his clothing and informs Picard that he is no longer a person, he will simply be known as human. Picard is strung up and left alone. 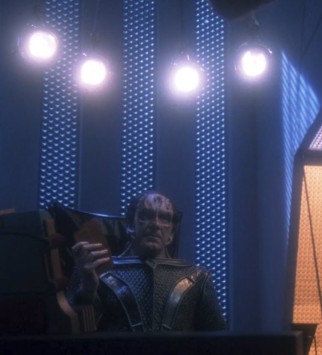 Gul Madred demonstrates to Picard that he can cause him pain at the touch of a button.   Madred asks Picard how many lights there are above him and, despite Picard answering correctly, Madred punishes him with more pain.   The torture and interrogation continues with Gul Madred continuing to punish Picard for not giving Madred the answers he desires, even if those answers are manufactured.  He reignites the lights and asks Picard again, how many there are.  Picard refuses to answer and is punished again.

Gul Madred wakes Picard from his slumber and informs the Captain that he is free to go.  Just before Picard leaves, Gul Madred informs Jean Luc that he will finish his interviews with the female they captured.  Picard now believes that Beverly and Worf have been captured and Worf has been killed. Picard chooses to remain in order to prevent Beverly from being tortured and killed as well. 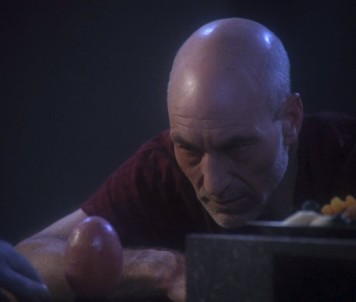 Madred feeds Picard a live Taspar Egg and is mildly impressed with the human for eating it without question.  Madred tells Picard a tale of his youth and Picard challenges Madred’s methods.  Picard informs Madred that, due to his torture methods, Picard finds the Gul a pitiable man.  This upsets Madred and begins to relentlessly torture Picard.  All the while, Picard resists, getting weaker and weaker with each attack.

Later, Madred arrives to find Picard trying to destroy the pain device.  Madred informs Picard that the Enterprise has been destroyed and the Cardassian invasion has been successful.  After giving Picard a choice to die or be free to live on Cardassia, Madred asks Picard once again how many lights the Captain sees.  Just as Picard is about to answer, guards arrive and inform Madred that Picard is to be freed and returned to the Enterprise. In the end, Picard yells at Madred that there are still only four lights. 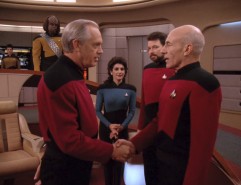 Picard is returned to the ship and is given back his command of the Enterprise. After returning, he talks with Troi and tells her that, in the end Madred gave Picard a choice between more torture and a life of comfort.   What bothers Picard that the Captain had reached his breaking point, in the end, he actually saw five lights.

There is a lot to digest in this episode and that is really a huge part of what makes it so good.  We not only get to see how the crew react to a radically new Captain (not well mind you) but also how brutal torture really can be.

Patrick Stewart and David Warner deserve an Emmy for this episode.  They not only nailed their parts but, despite being friends in real life, they managed to get you to believe that they were indeed torture and tortured.

Ronny Cox also did an amazing job as Jellico and has the honor of being the only other official Captain of the Enterprise NCC-1701 D, adding his name to the list of Enterprise Captains before him. 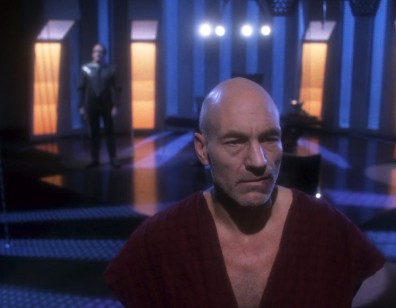 At its core this episode isn’t about just getting used to new ways of life but also the plight of the POW.  In much of our history of war, Prisoners Of War were horribly mistreated in many ways.  From rough interrogations to discover information about comrades to just plain sadistic torture, POW’s have faced some of the harshest and most horrible treatment known to man.  Many of those POW’s never see home again having either died at the hands of their captors or just finding themselves free but broken in ways they could ever imagine.  There are those that have made it back, either by escaping themselves or as part of a prisoner exchange program.  While there have been treaties and such put in place to prevent prisoners from being abused, it still happens today, on all sides. 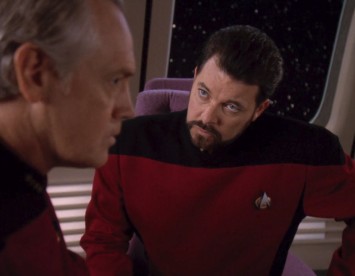 On another note, let’s talk about Riker.  As I indicated in the article for Part one of this episode, Jellico came in on the wrong foot and should have taken a different stance.  However, Riker is not innocent either.   While it was awesome to see Riker stick it to Jellico, it was also very inappropriate for the First Officer to act in the way he did.  The First Officer of a ship should be the guiding example to the rest of the crew.  Even though he is having a difficult time with the transition, his attitude set the standard for everyone else’s and it was not a good one.  How should have he acted, you ask?

To start with, he should never have questioned Jellico in front of his fellow officers.  That is certainly his first mistake.  Riker should have come to Jellico and told him privately how he felt about the situation.  If he still didn’t get any leeway he could have taken his issues to a higher officer or just kept trying to work with the new Captain.  Sure Jellico was difficult to deal with but Riker should have found a way to manage his manager.

We never see nor hear from Gul Madred again. I imagine Picard would have loved to have had the chance to turn the tables on him had he had the chance.

We never see nor hear from Edward Jellico again either. Not that we mind much.

Thanks for reading the Retro TV Review,  I look forward to discussing the rest of the series with you, one episode at a time every Monday, Wednesday and Friday!  Next Review: Ship In A Bottle