Continuing from the last episode, Worf finds himself captured by the most unexpected people.   Originally airing on March 1, 1993,  this is Birthright Part II.

Worf has found the Romulan Prison Camp but it is not entirely what it seems.  Meanwhile, the Enterprise searches for their missing crewmember.

…and now the conclusion.

Worf is captured.  He soon learns that many of the Klingons at Khitomer were captured without any chance of escape or return.   He discovers that they were not allowed to return home and, as such they  chose to stay and form a colony of their own.   Worf is ‘permitted’ to stay and begins to explore the compound.   While there he discovers that the youth there have no knowledge of their heritage and that they have been lied to about the state of the galaxy.   They believe there is a war that has devastated the cosmos so they are surprised to learn that Worf is unhappy there.

Worf begins to plot his escape when he learns from Tokath, one of the Romulans, that the Romulans and Klingons of the former prison had since joined forces.  Twenty years prior, Tokath volunteered to remain to keep the Romulans safe, they are now at a peace which comes to Worf’s surprise.  You see, Tokath has even married a Klingon woman and had a child with her, something that would never be possible outside the compound.  Worf soon attempts to escape and is stopped by the Romulans with the help of a Klingon youth.   Taken back to the compound,  Tokath implants a tracking device on Worf and warns him that, should he become a disruption, Worf will suffer the consequences. 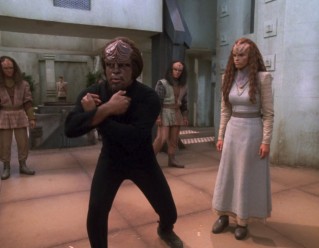 Worf begins to exercise in the courtyard, attracting the attention of the Klingon youths.  They soon begin following his lead with hopes to learn more about their heritage. Toq, the youth that was assigned to watch him, isn’t pleased with this and tries to stop him.  Worf deflects his displeasure and soon Ba’el, the woman Worf first met upon arriving, shows Worf her mother’s Klingon treasures.  Later that night, Worf teaches the youth of Kahless the Unforgettable and soon finds Ba’el again.  However, when he gets close, he discovers that she is half Romulan and he is surprised by this.

She explains that this is the case with many here and it seems he has much to think about.   Worf soon sees an opportunity to train the youth of the camp.   He asks to go hunt with Toq, his young ‘guard’ and, in doing so, the youth soon finds a connection with his Klingon heritage.  This, of course, disturbs Tokath as he is afraid that, should they learn of their heritage, the peace he has established will fall.  Worf explains that Tokath is denying the Klingon Youths of their heritage but Tokath refuses to listen.  Tokath offers Worf a choice, to live with them at peace of face execution.  Worf chooses to die as a martyr for the Klingon Youths in the camp, so that he can demonstrate how a warrior dies.  Soon, Ba’el tries to release him and Worf refuses.  He explains that, should he run away, he would betray everything it is to be Klingon.  She knows that Worf feels love for her but will not admit it, she begs him to stay with her and live a life together but he explains that he can not do so.

Tokath prepares Worf for execution and, as he prepares, Worf tells the citizens that this execution is a farce.  Soon Toq appears in full Klingon armour and tells Tokath that he wants to leave and, if they kill Worf, there will be bloodshed.  Tokath continues with the execution only to have others join the line with Worf, including his own daughter.   Soon Tokath’s wife, Gi’ral steps up and talks Tokath down.  She explains that, while it was their prison, it should never be their children’s prison.

This is a really good two part episode that focuses on Worf and his heritage.  It really shows more about how deep his Klingon side runs and how far he is willing to defend it. In many ways, Worf is in the wrong in this episode.  The prisoners there are not really there against their own will, in fact, their own people don’t even want them back, so when Worf comes to ‘save’ them, he is really destroying what they have built.

Think of it this way, imagine if you had a family and you voluntarily left them to be on their own for years.  When you came back to reclaim your family, you find that they have moved on.  Maybe your spouse has remarried, or your children have come to see someone else as their parent.  You expect things to be the way they were but they have no connection with you or your past so things are not going to be the same.  Would you then force them to remember the ‘good times’?  Of course not, this family was abandoned and have since moved on and that is really the case with this colony.  What started out as a prison camp became a full on village because neither side wanted anything to do with the people.  So, although Worf went there to find his Father and instead found something else, he is kinda a dick for trying to mess it up.

That being said, Tokath should have let him go and trusted him to not report them.  Then again, who says that he wouldn’t have…

Thanks for reading the Retro TV Review,  I look forward to discussing the rest of the series with you, one episode at a time every Monday, Wednesday and Friday!  Next Review: Starship Mine