Violating Orders, Career ending decisions and murder, all in the episode that originally aired on May 10, 1993.  This is Suspicions.

Doctor Crusher faces a court martial after investigating the death of a Ferengi Doctor. 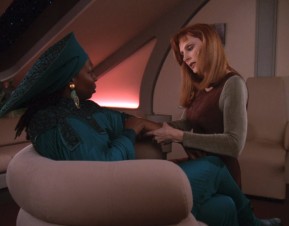 Guinan arrives at Crushers quarters for medical assistance, only to learn that Beverly is no longer a Doctor on board the USS Enterprise.    Crusher explains the situation to Guinan while working on the bartenders elbow.

You see, after encountering a clever Ferengi Scientist that no one took seriously, Beverly gathered a group of scientists to investigate his claims.   The Ferengi, Doctor Reyga, claims that he has developed a metaphasic shield that will allow ships to enter a star’s corona without issue.   No one believes his claims but Dr. Reyga plans to test the system with one of the Enterprises shuttles.   Another scientist, Dr Jo’Bril, volunteers to pilot the ship and the rest plan to view the event from the bridge.  The scientists, including a Klingon, Kurak, a married couple Drs Christopher and T’pan, Dr. Rayga and Dr Crusher watch from the bridge as Jo’Bril flies into the sun.  Before long Jo’Bril begins to have problems breathing and the Enterprise beams him out just before he collapses.  Beaming him to sickbay, Crusher does everything she can to save him, but she is unable to save him.

Soon everyone begins to investigate the death of Dr. Jo’Bril.   Crusher conducts an autopsy that goes nowhere while Data and Geordi investigate the shuttle with Dr Rayga.  Rayga defends his shield and nothing makes sense in the death of Jo’Bril.  Crusher cancels the shield testing much to Rayga’s dismay.    Rayga volunteers to test the shielded shuttle himself but is shot down by the group.  Before long, they find his body dead in one of the labs.   Crusher immediately determines that this was murder as it made no sense for a man so passionately committed to his work to commit suicide.  Unfortunately, Crusher is forbidden to complete an autopsy due to the Ferengi family’s refusal.

Crusher begins her investigation and questions her fellow scientists.   She learns that Rayga and the Klingon Kurak had an argument just prior to his death.  Kurak comes clean and tells Crusher that Reyga had accused her of sabotage which resulted in a fight.  Before long, she realizes that she could not determine his cause of death without an autopsy and willingly violates the wishes of Rayga’s family.   Knowing that it will cost her her career, she reports her findings to Picard.  Unfortunately she found nothing and she is relieved of duty.  Guinan suggests that, as Crusher has nothing left to lose, then Crusher should continue her investigation.  Crusher follows suit. 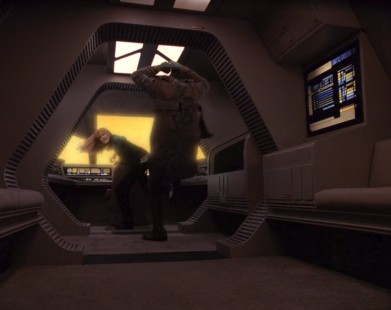 Crusher finds Data inspecting the shuttle and, after a conversation, learns that there is a chance that the shuttle had been tampered with from the Enterprise.  With the help of Nurse Ogawa, she access the autopsy files and finds the evidence she needs.  Crusher then takes the test shuttle and decides to test the shields for herself to prove that the system had been tampered with.   Despite Picard’s insistence, Crusher takes the shuttle into the corona of the nearby star.

We soon discover that it was in fact Jo’Bril who sabotaged the ship.  He was able to fake his own death in order to discredit Reyga and his technology.  He informs Crusher that he plans to take the shuttle and claim the technology as his own.   After incapacitating him, Crusher takes the ship back to the Enterprise.  She is reinstated and everything is back to normal. 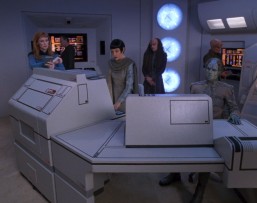 In what is mostly a filler episode, we get a chance to see a rare Doctor Crusher-centric story.   Gate McFadden did a great job in her role but the story seemed a bit…forced?   Taking the guise of a murder mystery, Crusher having to use her medical knowledge to find the killer sounds great on paper but the execution was lackluster.   For one, the supporting characters, specifically Picard and Riker, seemed very off character.  Even when they were trying to show interest, they just seemed like the events affecting one of their closest friends on the ship just wasn’t all that important.  For lack of a better term, their parts felt very phoned in.

My biggest issue with this episode is that it never really addresses Crusher’s disregard for protocol and her disobeying of orders. Even though she proved that the Ferengi Doctor was murdered, her autopsy supplied no viable information and, in performing one, she violated his family’s request.   So, reasonably, she would have at least been reprimanded or demoted or something, but no, all is forgiven.  Oy.

In all honesty, I had all but forgotten about this episode until watching it again for this blog series.  So, with that, I would consider it a flat and truly forgettable entry.

This marks Guinan’s final appearance on STNG.  We will see her again in the film Star Trek Generations.

Thanks for reading the Retro TV Review,  I look forward to discussing the rest of the series with you, one episode at a time every Monday, Wednesday and Friday!  Next Review: Rightful Heir