We take our emotions and feelings for granted.  What does it actually mean to feel joy, Anger or even Love? Oh, we all know the feelings well but how would you describe these sensations to a species who have never felt them?  This and more is explained in the episode that originally aired on September 27,1993.  This is Liaisons.

The Enterprise is visited by alien dignitaries who start to exhibit strange behaviors, meanwhile Picard’s shuttle crashes on a planet where he meets a woman who has been stranded for seven years.

Picard, Worf, Riker and Troi meet with the Lyaraan dignitaries where two of the three diplomats remain on board as Picard leaves with the third,Voval.   It immediately becomes clear that the dignitaries are particular with one of them, Loquel, is interested in indulging himself on the delights of the ship while, the other, Byleth begins to antagonize Worf, who has been assigned as the ambassadors guide aboard the ship.

Picard, on the other hand, finds conversation a bit dull with his dignitary aboard the shuttle craft.  Just as things begin to get mundane, the ship begins to show signs of failure and they crash-land onto a nearby M class planet.  Picard awakes to find Voval near death and the ship crashed on a hostile planet.  When he attempts to find help, he is knocked unconscious and is dragged away by a mysterious stranger.

Byleth and Worf tour the ship with Byleth continuing his belligerent toward Worf.  Worf is doing all he can to deal with the man but finds it difficult.  Meanwhile Troi and Loquel tour the ship as well and Troi finds herself dealing with a man who can’t think of anything but desert.

Picard awakes to find himself in another ship with a strange device attached to his side.  A young woman appears, informs him that he has been hurt and that Picard’s companion is dead. Soon she identifies herself as Anna and that she crashed on the planet with a crew of Tarellians seven years prior.  Picard asks her to go to the crashed shuttle and bring back a way for them to communicate with Starfleet.  She agrees and returns with the device Picard asked for.  Picard notices that the transmitter has been destroyed and, since she used a phaser to remove it, it is now useless to them.  Picard, although disappointed, is compassionate about the accident and assures Anna that they will escape somehow, no matter the odds. She then kisses him and tells Picard that she loves him. 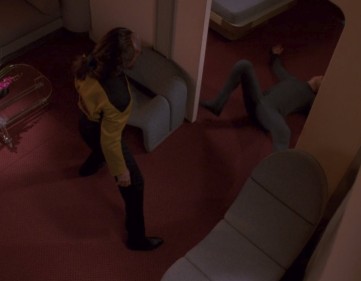 Meanwhile, back aboard the Enterprise, Worf and Troi brief Riker on their assignments.  Worf is furious as to how Byleth is treating him and requests a reassignment away from the dignitary.  Riker denies his request but suggests they play poker that night instead. That night the Poker game goes as expected,  Byleth continues to antagonize Worf by blatantly stealing from the Klingon. Byleth and Worf’s argument escalates into a fight much to Byleth’s delight.  It appears as if the ambassador has been looking for a conflict with the Klingon.   Once Worf gets into a physical fight with him, Byleth is pleased and leaves to document the event much to the surprise of everyone else.

Back on the planet, Picard discovers that the device Anna placed on him to fix his ribs was really a fake.  He pulls it off and confronts Anna about her plans.  She is clearly insane and, when he attempts to leave, she begins to kiss him demanding that Picard ‘Loves’ her.   When he denies her attempts, she states that ‘she failed, [Picard] doesn’t love her’ and leaves him locked in the shelter.  Within moments Voval arrives and explains that he was only unconscious when they crashed but soon asks about the person he saw running off.   They both go to search for Anna near a cliff and, when they separate, Picard finds Anna contemplating suicide on the cliff side.  It is when Picard notices that Anna is wearing a necklace that broke earlier, that he realizes Voval has been playing his mind.   Anna reveals herself to be Voval once Picard challenges him.  Voval explains that he and his team are there to experience various human emotions they didn’t understand, namely Love, Antagonism and Pleasure.  These concepts were alien to them and they wished to learn these attributes from their human hosts.  Picard is returned to his ship and the Ambassadors depart with their newfound knowledge. 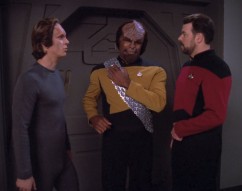 This is one that probably looked great on paper but when it was put into action it lost…something.   The premise is solid,  a race of aliens who want to explore human emotions through experience but the execution is flawed at best.

We really learn nothing about any of the characters in this one although, seeing that we have just gone through six years of episodes, I’m not sure how many more major revelations there could be.

All in all, I guess it is what I would consider a filler episode.  It is one that is good enough to sit through but not good enough to be considered a favorite.  Not a great start to the final season, but at least it’s still better than most of season two.

We never see nor hear from the Lyaarans again.  I guess they got their fill of human emotions.

Interestingly enough, this is one of the few episodes we don’t see the Bridge of the Enterprise.

Thanks for reading the Retro TV Review,  I look forward to discussing the rest of the series with you, one episode at a time every Monday, Wednesday and Friday!  Next Review: Interface